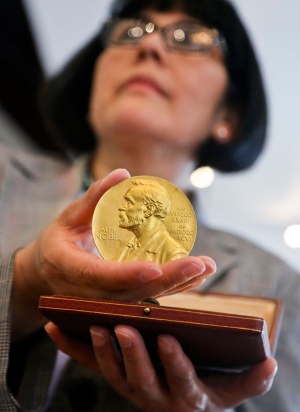 Francis Crick’s Nobel medal fetched US$2.27 million at an auction in New York on Thursday. The proud new owner is Jack Wang, chief executive of a Chinese company that intends to sell electromagnetic devices that it claims have medically regenerative powers.

The closely watched sale featured a range of Crick memorabilia that the family had kept in storage for many years. Up for auction along with the medal — awarded for Crick’s role in the 1953 discovery of the structure of DNA — were his lab coat, sailing logbooks and garden journals. Expectations were high because the day before, auctioneer Christie’s had brokered the sale of a letter from Crick to his 12-year-old son for $6 million, more than triple the pre-sale estimate. The letter went to an anonymous bidder.

As the 23-carat-gold medal sat glittering in a glass display case at the Fletcher-Sinclair Mansion near Central Park, live bidding opened at $280,000. Heritage Auctions of Dallas, Texas, the firm running the sale, had estimated that the medal could go for $500,000. Bidders began raising yellow numbered placards as the price soared, breaking the $1-million mark in less than minute. As quickly as it had begun, the auction was over, won by the mysterious man in the back: buyer number 130.

Who was he? After the auction, he introduced himself as Jack Wang, a Chinese-born American. He handed out a business card for his company Biomobie, with offices in Shanghai and Menlo Park, California, and posed for a photo with Crick’s relatives. He says that his motivation for purchasing the medal was to stimulate research into the “mystery of Bioboosti”, which, he says, produces electromagnetic stimulation that can “control and enable the regeneration of damaged organs”. He is not a scientist himself but plans to set up a scientific committee to judge what the device can do.

Jack Wang is the proud new owner of Crick's medal.

The company’s website features an image of a Bioboosti, a flying-saucer-shaped device the size of a walnut, which a person holds in the palm of their hand. The company says that the Bioboosti can help to build new blood vessels, ward off heart disease and lower blood pressure by “arousing the inherent cardiovascular regeneration program in the brain”. The website also features case studies and data collected at several Chinese universities on other purported applications, such as male sexual dysfunction and varicose veins. Wang says that the product is not yet on the market, and a peer-reviewed report is in the works.

Pulsed electromagnetic field therapy has been tested, with mixed results, for bone repair, wound healing and pain relief, but it is not considered part of mainstream medical practice. “Applied electromagnetic fields have various effects on living systems, but whether and how such fields are best used therapeutically is not settled," says Michael Levin, director of the Tufts Center for Regenerative and Developmental Biology in Medford, Massachusetts.

Kindra Crick, Francis Crick’s granddaughter and an artist based in Portland, Oregon, was pleased with the auction result. The family will donate at least 20% of the proceeds from the sale of the medal and other items to the Francis Crick Institute, a biomedical research centre scheduled to open in London in 2015. “It’s a win for science,” she says.