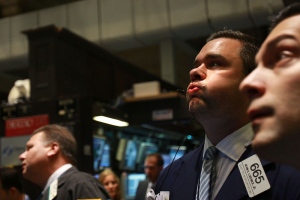 Traders on the floor of the New York Stock Exchange moments after the opening bell 13 October, 2008.

Suppose you had a direct line into the minds of stock-market traders. Would you be able to predict which investment decisions they will take, and thus anticipate the markets?

A team of researchers in the United Kingdom and the United States now suggests that such a crystal ball might exist, in the form of the search terms recorded and made publicly available by Google Trends. Tobias Preis, a computational social scientist at the University of Warwick, UK, and his colleagues say that their analyses of Google Trends data show “early warning signs” of how the markets will shift — including the financial crash of 2008. Their results appear in Scientific Reports1.

The predictive value of Google Trends has been demonstrated in other areas of social science. Most famously, outbreaks of influenza have been seen emerging in real time by monitoring the numbers of Google searches for terms related to flu prevention and cure2.

The potential of using such information to study economic behaviour has been spotted before. Preis and his co-author, the physicist Eugene Stanley of Boston University in Massachusetts, have themselves shown that certain search terms reflect the volume of stock-market transactions3. Mathematical physicist Didier Sornette of the Swiss Federal Institute of Technology in Zurich, in collaboration with Japanese economists, has found that the volatility (fluctuations) of financial markets can be correlated with the prevalence of particular topics in the business news4.

But what traders and investors really want, of course, is a method that not only assesses the current state of the markets but also anticipates their future course. In particular, episodes of instability, such as the financial crisis of 2008, are often preceded by periods of concern during which investors avidly seek information to decide whether to buy or sell.

Preis and his colleagues reasoned that such anxieties and moods might be signalled by Google search terms. It might be expected, for instance, that just before the onset of the latest financial crisis, 'debt' would have featured prominently. And that is just what the researchers found.

To test whether such correlations could be made predictive, they devised trading strategies in which a decision to buy or sell was linked to the recent prevalence of particular search terms. They simulated how these strategies would have performed between 2004 and 2011 on the basis of real data from the financial markets.

Of the 98 ‘Google Trends’ strategies the researchers explored, that based on 'debt' performed best. By 2011, it would have increased the value of a financial portfolio by more than 300%, compared with just 16% for a common conventional investment strategy.

But although the results sound impressive, the relevance of a predictive Google search term is not always clear. The second-best strategy, for example, was linked to 'colour', and the fourth best to 'restaurant'. Even the use of 'debt' is not obvious, because its role in the financial crash was apparent only as it happened. “How would they know in advance that they should use ‘debt’?” asks Sornette.

“In retrospect, it is always possible to derive what appear to be highly successful trading strategies,” says economist Paul Ormerod of the London-based consultancy Volterra Partners. “But what we want is to be able to do that before the event, not after.”

Furthermore, economists acknowledge that any transparently profitable strategy for playing the markets will quickly lead to a change in trader behaviour that cancels it out — a principle called Goodhart’s law, after the British economist Charles Goodhart. “Social systems have the complication that the system may directly react to predictions being made about its behaviour,” agrees Susannah Moat, a computational social scientist at University College London and a co-author on the study.

The researchers suggest, however, that a key outcome of their approach might be to elucidate the psychological mechanisms that guide traders to their decisions, which could be encoded in their information gathering. “Stock-market data themselves tell us little about how traders make decisions,” says Preis.

“We think that the overall pattern we observe may reflect loss aversion,” he adds — the fact that people are more concerned about losing money than they are about missing an opportunity to gain the same amount5.