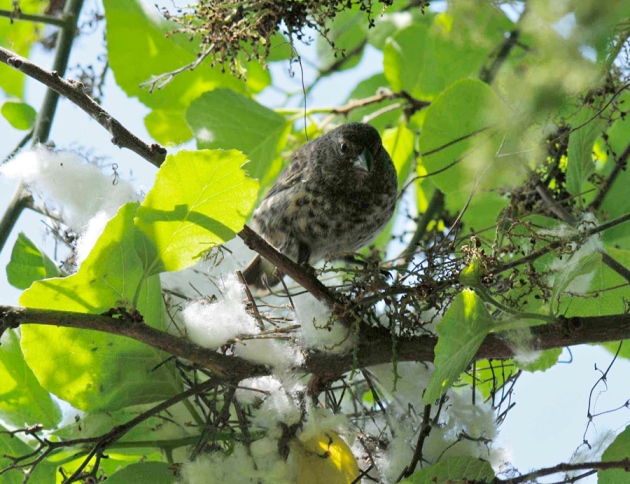 A simple intervention can help Galapagos finches to stave off an insidious parasite. Offered insecticide-soaked cotton, birds from four finch species wove it into their nests and effectively stamped out an invasive nest fly, researchers report today in Current Biology1.

The fly Philornis downsi represents a serious threat to the iconic birds, whose speciation patterns were key to Charles Darwin's theory of evolution. Its larvae feed on blood from newly-hatched finches and have been known to kill all a year's nestlings at a given field site.

The larvae were found to be killing off nestlings in Ecuador's Galapagos Islands in the 1990s, spurring conservation ecologists and others to seek a way to eliminate the flies without harming the birds. Now, with funding scarce and the finch population declining, it turns out that the answer might be as simple as giving the birds the means to conduct their own pest extermination.

The idea of self-fumigation came to study co-author Sarah Knutie in 2010 while she was sitting on a porch at the Charles Darwin Research Station on Santa Cruz island in the Galapagos, where she was conducting research on the fly and its effects.

“I noticed finches taking laundry line back to their nests,” says Knutie, a conservation ecologist at the University of Utah in Salt Lake City. When Knutie provided a stash of cotton balls, the birds took those, too. A few years later, during a workshop on pest-control ideas, she proposed putting insecticide-soaked cotton balls in dispensers for the birds to take back to their nests.

“I don’t know that I was taken seriously, but I thought it could be an immediate solution,” she says.

In January 2013, after raising money for a plane ticket and supplies through crowd-funding website RocketHub, Knutie returned to Santa Cruz Island to test her hypothesis with some colleagues.

The research is proof that the method can be effective, says Peter Grant, an evolutionary biologist at Princeton University in New Jersey who with his wife Rosemary spent four decades working with Darwin’s finches. “Now the challenge is to devise a method whereby a large amount of cotton with substantial quantity of insecticide can be delivered reliably to nests,” he says. “This is needed to ensure maximum effectiveness.”

Working with the Galapagos National Park Service, which monitors the islands' ecology, researchers at the Charles Darwin Research Station are now assessing permethrin risk to the birds and natural areas. Another group at the station has started offering untreated cotton to different finch species on the neighbouring island of Isabela to gauge the birds' interest.

“Right now,” says Charlotte Causton, a senior researcher at the Charles Darwin Foundation in the Galapagos, “this is the only control method that’s feasible.”