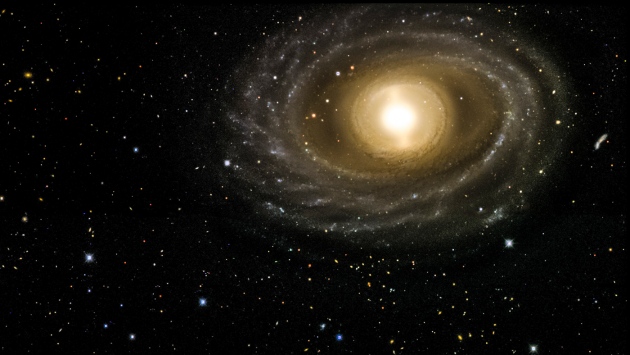 The Dark Energy Survey mapped the shape of 26 million galaxies, including NGC 1398, which is about 20 million parsecs from Earth.

Cosmologists have produced the biggest map yet of the Universe’s structure, and found that matter might be spread more evenly than previously thought.

The results, part of the ongoing Dark Energy Survey (DES), chart the distribution of matter in part by measuring how mass bends light, an effect known as weak gravitational lensing. It was the first time the technique had been fed enough data to measure some of the crucial features of cosmic evolution with a precision approaching that for the maps generated from cosmic microwave background (CMB) data, which measure the afterglow of the Big Bang and are the gold standard of cosmology. “We believe that, with these results, we’re no longer the poor cousin” to other efforts, says DES leader Joshua Frieman, a cosmologist at the Fermi National Accelerator Laboratory (Fermilab) in Batavia, Illinois. “We now have results that have comparable power to constrain cosmology.”

There are still some discrepancies with earlier surveys on measurements such as the lumpiness of mass, but they are within the experiments’ margins of error. As the DES maps larger volumes of space, it should become clear whether the disagreements are real, says cosmologist Anthony Tyson, a pioneer of weak gravitational lensing at the University of California, Davis. So far, he says, “I believe they have been very careful and conservative in their interpretations”.

The DES, a collaboration of more than 400 researchers, gathers its data using the 4-metre Victor M. Blanco telescope, part of the Cerro Tololo Inter-American Observatory in Chile. Data collection began in 2013; the current map is based on the first year of measurements, which logged 26 million galaxies in the southern sky and their apparent shapes.

According to Albert Einstein’s general theory of relativity, mass warps space, so a large amount of matter in the foreground of a galaxy can bend its light in a way that makes the galaxy look slightly squashed. This is true whether the foreground mass is made of ordinary matter or of invisible dark matter. Galaxies can appear squashed for other reasons, including their actual shapes and orientations. But if many galaxies in a certain region of the sky seem on average to be skewed along the same direction, gravitational lensing is the probable culprit.

The DES cosmologists were able to tease out the composition of the Universe in a similar way to how the CMB surveys have done in the past — most recently using the European Space Agency’s Planck satellite. Their results confirm that ordinary matter constitutes only 4% the Universe’s contents. But they show a slightly smaller amount of dark matter — about 26% — than the 29% estimated by Planck, with the rest being taken up by ‘dark energy’, the stuff thought to be pushing the cosmos apart at an accelerating speed.

More intriguingly, the DES seems to have found a deviation from Planck’s prediction of the current lumpiness of matter. Whereas ordinary and dark matter were evenly distributed in the Universe’s infancy 14 billion years ago, that is not the case in present galaxies. Gravity has been pulling the matters together into a web-like structure of clusters and filaments, with enormous voids in-between. The concentration measured by the DES is 7% lower than that predicted by the standard model of cosmology.

The gap is not statistically large, at about one standard deviation. But another weak lensing project, the Kilo Degree Survey (KiDS), found the same kind of deviation last year1.

If confirmed, the discrepancy could mean that, over cosmic history, mass has been clumping more slowly than expected. And that could potentially reveal new physics, such as unexpected interactions between dark matter and dark energy or new types of neutrino. The DES presented its results on 3 August at a meeting of the American Physical Society at Fermilab, and the authors posted a battery of ten papers online (see go.nature.com/2ubhr8l).

Although cosmological observations have been converging towards a consistent, detailed picture in recent decades, the weak-lensing observations are not the only ones still troubling researchers. Astronomers have, for instance, found that the cosmos is expanding faster than predicted on the basis of Planck data. George Efstathiou, director of the Kavli Institute for Cosmology in Cambridge, UK, and a member of both the Planck and DES collaborations, says that the clumping discrepancy is potentially more worrisome than the one relating to cosmic expansion.

Overall, researchers are excited to have another tool with which to probe the cosmos in ever-greater detail. “My own view of all of these measurements is that they are stunning tests of the cosmological model, and the precision and accuracy only keep getting better and better,” says astronomer Wendy Freedman of the University of Chicago in Illinois.

The final survey, due to conclude in 2018, will cover one-eighth of the sky; the results might be available some time in 2020, Frieman says. Ultimately, the DES aims to map a large-enough region to see how the influence of dark energy has evolved over the Universe’s recent history.

“This is exciting,” Tyson says. “The future looks bright for weak gravitational lensing.”

The original version of this story has been replaced by the version that ran in print.

An earlier version of this article stated, incorrectly, that the latest map of the Dark Energy Survey covered a region of the sky three times as large as the DES’s 2015 map. It also misrepresented Anthony Tyson’s view: he did not believe that when the DES accumulates more data, the findings will necessarily draw closer to the Planck results.