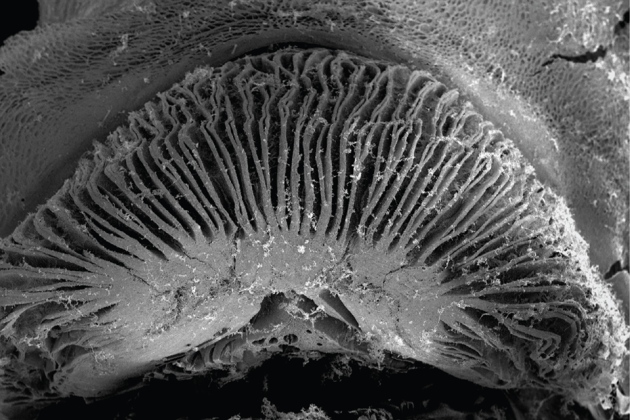 Suckers like tupelip wrasses use the folds in their lips (pictured) to suck up mucus from coral reefs.

For hungry fish, corals make a difficult meal: venomous, coated with mucus and embedded in a razor-sharp, calcified skeleton. But one species, the tubelip wrass (Labropsis australis), has developed an unusual strategy to evade these stinging defences. The fish gives corals slime-covered kisses.

The finding, published on 5 June in Current Biology1, adds to scientists’ understanding of how corals and the fish that feed on them affect each other.

Wrasses that don’t feed on corals have thin lips and protruding teeth that resemble a beak. But tubelip wrasses have elongated, fleshy lips that they use to suck up a reef’s protective mucous coating. A scanning electron microscope reveals that the lips are furrowed with tiny channels and divots, soft and ribbed like gills on the underside of a mushroom. Those grooves contain mucous glands that can cover the wrasses’ lips in protective slime.

“We’ve never seen anything like this,” says David Bellwood, a marine biologist at James Cook University in Townsville, Australia, and a co-author of the paper. “Self-lubricating lips! Who would have predicted that?”

The snotty kiss probably serves a dual purpose. The mucus helps protect the lips from the corals’ stinging cells; clownfish have a similar coating that protects them from the stinging anemones they call home. And in combination with the grooves, the mucus helps the tubelip wrasses to form a seal against jagged pieces of coral. This enables them to suck up their meal of the coral’s mucus like someone drinking a milkshake through a straw. The seal is so strong that the kiss ends with an audible smacking sound.

“Corals must be one of the hardest things on the planet to eat,” says Bellwood, but numerous fish species have found a way2.

These coral-feeding fish are an integral part of the reef ecosystem, says Shaun Wilson, a marine scientist at the Western Australia Department of Parks and Wildlife in Perth. They may help corals by eating diseased tissue. But they could also hurt the corals by carrying illnesses from one feeding spot to another.

Bellwood compares the tubelips and other coral-eating fish to leeches or mosquitoes — harmless to a healthy ecosystem, but if there are too many of what he calls “slimy suckers” in an unhealthy reef, they could stress the corals. Studying how these fish eat can help scientists understand their impact on reefs.

So far, self-lubricating lips seem to be unique to tubelip wrasses. But that doesn’t mean other fish haven’t evolved similar feeding strategies — just that they haven’t been found yet. “I wouldn’t be surprised if a small Amazonian catfish has independently come up with the same solution,” says Bellwood. “Fish are marvellous beasts.”