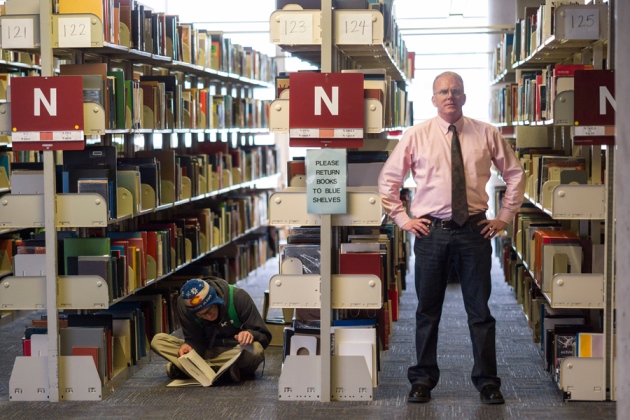 Jeffrey Beall (right) says he has 'unpublished' his controversial website that blacklists some open-access publishers.

A widely read website that lists "potential, possible or probable predatory scholarly open-access publishers" was wiped clean of all its content on 15 January — but its creator, Jeffrey Beall, won’t say why.

“My blog is now unpublished,” said Beall, an academic librarian at the University of Colorado, Denver (UCD). He added that he couldn’t give reasons and declined to comment further.

A spokeswoman for UCD said that Beall made a “personal decision” to close down his blog, and that Beall is still employed on the university’s faculty. In a statement, the university added that Beall would no longer maintain or publish his research on open-access journals and predatory publishers.

Since 2010, Beall has single-handedly listed thousands of open-access journals that he says exploit or deceive authors by charging fees to publish papers without providing expected publishing services such as peer review, archiving and editing.

“The list’s importance is tremendous,” says Rick Anderson, an associate dean in the library at the University of Utah in Salt Lake City. “There really are predators out there running scholarly-communication scams, and Beall has been the only person willing to call them out.” Anderson says he fears the list was taken down because of legal threats.

Beall’s ‘blacklist’ has been controversial. Some publishers, such as OMICS Group, based in Hyderabad, India, have threatened to sue him. (Last year, the US Federal Trade Commission itself sued OMICS for deceiving researchers and hiding publication fees.) There have been several past legal threats, says the UCD spokeswoman, but none has escalated into actual lawsuits.

Others have complained of a lack of transparency in Beall’s judgements, and that it is hard to get off the list once on it. In 2015, Beall controversially added the publisher Frontiers to his list — a decision that divided researchers. (The Holtzbrinck Group, in Stuttgart, Germany, is a part owner both of Frontiers and of Nature’s parent company, Springer Nature).

A scholarly-services firm, Cabell’s International in Beaumont, Texas, is creating its own blacklist of journals, which it says is launching this spring. It had hired Beall as a consultant, and its list will include some of the journals on Beall's list if they satisfy the firm's own criteria, a spokeswoman for Cabell’s says. It had not been made aware of any changes regarding Beall being a consultant, the spokeswoman adds, and the organization is "not sure what is going to happen going forward”.

Lacey Earle, vice-president of business development at Cabell’s, tweeted that Beall was “forced to shut down blog due to threats & politics”. She did not respond to a request to discuss this with Nature and the spokeswoman declined to comment further.

Beall’s list hasn’t quite vanished, however. Since its disappearance, cached copies have been shared widely on social media.

This article originally identified Rick Anderson as a library dean; he is an associate dean.