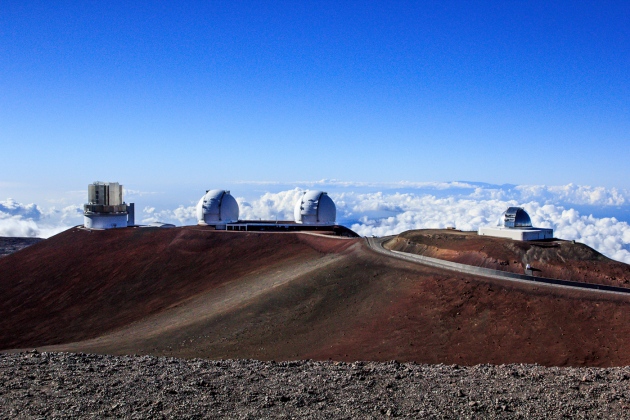 The Thirty Meter Telescope would join other large telescopes atop Mauna Kea in Hawaii.

Hawaii’s board of land and natural resources granted a fresh construction permit to the Thirty Meter Telescope (TMT) on 28 September, reviving the fortunes of the US$1.4-billion observatory — at least temporarily.

The permit moves the international project closer towards restarting construction near the summit of the Hawaiian mountain of Mauna Kea. Some Native Hawaiians oppose the TMT, saying that its construction would further violate a sacred mountain that is already home to multiple telescopes.

The board’s decision effectively puts the TMT project back where it was before protestors halted the telescope’s construction in April 2015, just days after it had begun, by blocking the road up Mauna Kea. That December, following months of challenges, Hawaii’s supreme court invalidated the telescope’s first construction permit. The court ruled that the state land board had not followed appropriate procedures because it had approved the first permit, in 2011, before it held a set of public hearings on the case.

The board’s latest decision follows a July recommendation to issue the permit from retired judge Riki May Amano, who oversaw more than 40 days of additional hearings earlier this year for the board. Another set of public hearings took place this month, after which the seven-member board voted five to two to issue the permit. “This was one of the most difficult decisions the board has ever made,” said chairperson Suzanne Case.

The new permit adds requirements to construction plans for the telescope, including a zero-discharge wastewater system and cultural and natural-resources training for workers.

“We are greatly encouraged,” said TMT board chair Henry Yang in a statement. “In moving forward, we will listen respectfully to the community in order to realize the shared vision of Maunakea as a world center for Hawaiian culture, education and science.”

Telescope opponents have filed motions that would effectively put the permit on hold until the state supreme court can hear an appeal. “Construction should not begin before all legal processes have run their course,” said KAHEA: The Hawaiian–Environmental Alliance, a group in Honolulu that opposes the TMT, in a statement. Mauna Kea “is being stripped and disrespected”.

But TMT supporters say the telescope would bring educational and employment opportunities to a state with a long history of astronomy. TMT organizers have been exploring the possibility of building the telescope on the island of La Palma, in Spain’s Canary Islands, if they cannot begin construction on Mauna Kea by a self-imposed deadline of April 2018. Project partners include the University of California system, the California Institute of Technology in Pasadena and the governments of India, China, Japan and Canada.