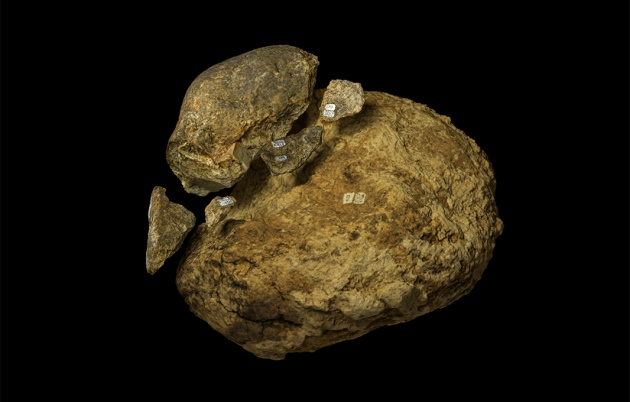 A 'hammer' stone — possibly shaped by ancient humans — found in California and dated to 130,000 years ago.

Ancient humans settled in North America around 130,000 years ago, suggests a controversial study — pushing the date back more than 100,000 years earlier than most scientists accept. The jaw-dropping claim, made in Nature1, is based on broken rocks and mastodon bones found in California that a team of researchers say point to human activity.

Their contention, if correct, would force a dramatic rethink of when and how the Americas were first settled — and who by. Most scientists subscribe to the view that Homo sapiens arrived in North America less than 20,000 years ago. The latest study raises the possibility that another hominin species, such as Neanderthals or a group known as Denisovans, somehow made it from Asia to North America before that and flourished.

“It’s such an amazing find and — if it’s genuine — it’s a game-changer. It really does shift the ground completely,” says John McNabb, a Palaeolithic archaeologist at the University of Southampton, UK. “I suspect there will be a lot of reaction to the paper, and most of it is not going to be acceptance.”

The study focuses on ancient animal-bone fragments found in 1992 during road repairs in suburban San Diego. The find halted construction, and palaeontologist Tom Deméré of the San Diego Natural History Museum led a five-month excavation. His crew uncovered teeth, tusks and bones of an extinct relative of elephants called a mastodon (Mammut americanum), alongside large broken and worn rocks. The material was buried in fine silt left by flowing water, but Deméré felt the rocks were too large to have been carried by the stream. 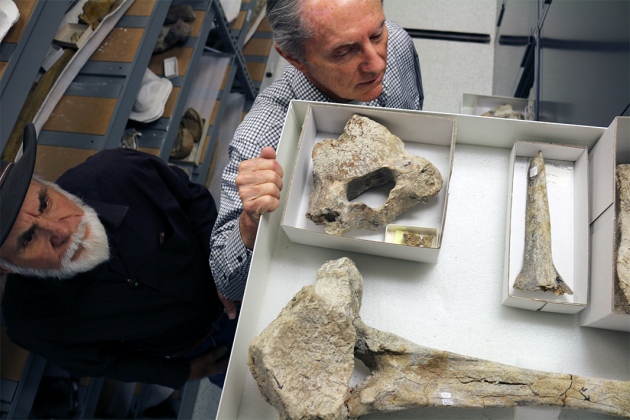 “We thought of some possible explanations for this pattern, and the process we kept coming back to was that humans might be involved,” he says. Attempts in the 1990s to date the site suggested that the ivory was some 300,000 years old, but Deméré was sceptical: the method his colleagues used was problematic, and the age seemed so improbable for humans to be living in California.

Over the past decade, archaeological research and studies of modern and ancient DNA have reached a consensus view on the peopling of the Americas: humans from Asia crossed the Bering land bridge into Alaska some 20,000 years ago and reached the southern tip of South America around 14,000–15,000 years ago2.

“I’m sure that many of our colleagues are going to be quite sceptical. I would expect that.”

Some archaeologists, however, maintain that humans arrived earlier. They point to sites containing rocks that resemble stone tools as well as large animal bones that have damage apparently inflicted by humans. Deméré's co-authors Kathleen Holen and her husband Steven Holen, archaeologists at the Center for American Paleolithic Research in Hot Springs, South Dakota, have put forward several sites in the US Midwest as evidence for a human presence in the Americas up to 40,000 years ago3. But many scientists have viewed these claims with scepticism.

After hearing about the San Diego mastodon, the Holens visited Deméré in 2008 to see the boxed-up remains. “We were looking at something very, very old, but it had the same fracture patterns that we had seen before,” says Kathleen Holen. The bones looked as though they had been set on a large ‘anvil’ stone and struck with a ‘hammer’ rock. The team contends that the rocks recovered from the site were used either to extract the mastodon’s bone marrow or for making more-delicate bone tools. There are no obvious cut marks on the mastodon bone, suggesting that the animal wasn’t killed or butchered for its meat.

Using refined dating methods, the researchers tried again to determine the age of the site. They couldn’t use radiocarbon dating on the mastodon remains because the bones lacked carbon-containing collagen protein. A second method was too imprecise. A third technique, which measures relative levels of radioactive uranium and thorium in bone, suggested that the remains are 130,000 years old. “I’m sure that many of our colleagues are going to be quite sceptical. I would expect that. This is far, far older than most archaeologists expect hominins to be in North America,” says Steven Holen. “I say that even for myself.” 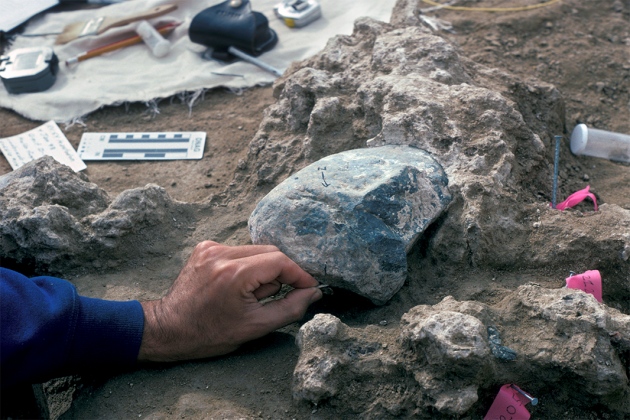 A researcher holds a mastodon molar fragment found under a rock anvil discovered at the California site.

Alistair Pike, an archaeological scientist at the University of Southampton who specializes in uranium dating, notes that the team’s method relies on simplified models of how uranium seeps from groundwater into bone, but he sees no obvious flaws in the dating work. “At face value, these results are about as good as it can get,” he says.

Collecting ancient DNA from the remains and determining the animal’s evolutionary relationship to other mastodons could also help to establish the site's age, notes Pontus Skoglund, a population geneticist at Harvard Medical School in Boston, Massachusetts, who works on ancient DNA. If the discovery holds up, he adds, “it would be one of the most Earth-shattering revisions of our view of the peopling of the world”.

Before invoking humans, however, the researchers need to better rule out the possibility that natural forces broke the rocks and bones, says David Meltzer, an archaeologist at Southern Methodist University in Dallas, Texas. “If you are going to push human antiquity in the New World back more than 100,000 years in one fell swoop, you’ll have to do so with a far better archaeological case than this one.”

McNabb would like to see the breakage patterns analysed in more detail. He finds it “curious” that the site yielded no other traces of human presence, such as the shaped stone tools that are typically found at much older animal-butchery sites in Africa.

Erella Hovers, an archaeologist at the Hebrew University of Jerusalem who reviewed the paper for Nature, says she raised her eyebrows when the manuscript arrived in her inbox: “I was like, ‘Uh, really?’”. But after revisions that elaborated on the dating work and demonstrated that hitting modern elephant bones with large rocks produces damage patterns similar to those seen on the mastodon bones, she is now convinced that hominins created the California site.

“This is mind-boggling,” says Hovers, who also wrote a commentary accompanying the study. “It leaves a ton of questions because we know nothing else, except that there were some sort of people there at this time.”

Who were the first Americans?

If humans or their ancient relatives were responsible, there are several candidates. The ancestors of modern non-African humans left the continent less than 100,000 years ago, but earlier migrations out of Africa might have reached North America, Deméré and his co-authors say. They point to 100,000-year-old Homo sapiens-like teeth from China and to hints that some indigenous groups in South America carry trace ancestry from a possible earlier migration into the Americas.

Chris Stringer, a palaeoanthropologist at the Natural History Museum in London, favours Denisovans or Neanderthals, which both lived in southern Siberia at least 100,000 years ago. Yet there is no evidence that either group could survive the epic Arctic voyage across from Siberia to Alaska. “Many of us will want to see supporting evidence of this ancient occupation from other sites before we abandon the conventional model of a first arrival by modern humans within the last 15,000 years,” Stringer says.

“We’re going to start looking,” says Deméré, who has his eye on another California site that his team excavated a few years ago.

Steven Holen hopes that other scientists will join the search. “Keep your eyes open for this kind of material when you’re out in the field,” he says. “Don’t just say ‘This can’t be’.”