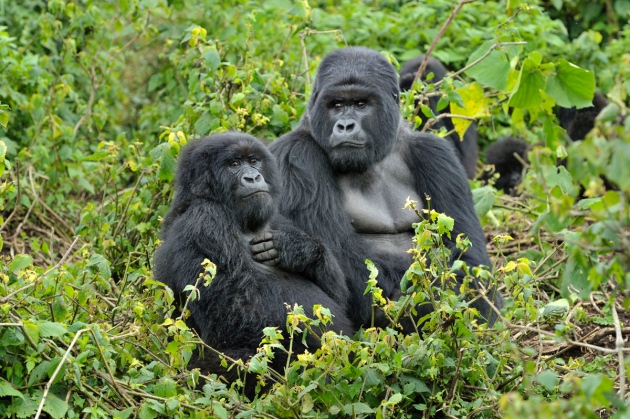 Not all mammals form strong family bonds, but some do — including mountain Gorillas (Gorilla beringei) — and biologists have different, competing theories to explain why.

For decades scientists have debated the evolutionary explanation for why some species practise social monogamy, or 'pair-living' exclusively with one mate. Two studies published this week have begun the arguments afresh.

There are two broad theories about what drives monogamy. Some researchers hold that in certain species, females were dispersed so widely that it would have been difficult for males to monopolize an area large enough for them to have multiple partners. Others think that monogamy evolved as males stuck around their mates to protect their offspring, in particular from being killed by rivals.

Christopher Opie, an anthropologist at University College London, and his colleagues have now traced potential drivers of monogamy in 230 primate species, back to a 75-million-year-old common ancestor. The researchers compiled information about how each species behaves, such as the range of females’ territories and whether the males care for their young and guard their mates, then they ran computer simulations of the evolutionary process.

“We’re effectively re-running history millions of times to see how all these behaviours would have had to have evolved in order for us to get to where we are now,” says Opie.

The researchers found that mating relationships co-evolved with several behaviours. “When the mating system changed, the behaviour changed,” says Opie. But of all the behaviours, infanticide by rival males was the only one to consistently precede a shift to monogamous mating, they report today in Proceedings of the National Academy of Sciences1. The fear of infanticide alone can be postulated as a cause of monogamy in primates, Opie says; the other behaviours are consequences.

Yet the waters will be muddied by a report published today in Science2. This study considered the wider origins of monogamy in mammals. Whereas almost one-third of primate species are monogamous, fewer than one-tenth of mammals are.

Tim Clutton-Brock and Dieter Lukas, both zoologists at the University of Cambridge, UK, used a previously published detailed evolutionary tree of 2,288 species of mammal3. They found that all but one of the evolutionary transitions to monogamous partnerships arose from scenarios in which females were solitary. Unable to mate with more than one female, males were probably guarding their mates as a way of maximizing their number of offspring, and any increase in paternal care was a “consequence, not a cause”, says Lukas.

Lukas and Clutton-Brock also ran the analysis on primates only, but unlike Opie and his colleagues, they found no association with infanticide. Clutton-Brock says that the discrepancy could be a result of different ways of categorizing the behaviours. “We clearly must get together with Opie to sort this out,” he says.

Opie calls the Cambridge study “interesting and ambitious” and says that his results for primates must be a peculiar subset. He says that his ultimate interest is in probing the origins of human monogamy. “It’s hard work in my experience, so why would so many primates do it?” he asks.

“We’re very cautious about extending our conclusions to humans,” says Clutton-Brock. “Humans are so very unusual because they have culture — and that changes things.”

Whereas Opie’s work indicates that the need for long periods of paternal care gave rise to monogamy, Lukas and Clutton-Brock see that need as just a lucky by-product of evolutionary chance.

“Both papers have been carefully researched and will be discussed for some time to come,” says Phyllis Lee, a behavioural ecologist at the University of Stirling, UK.