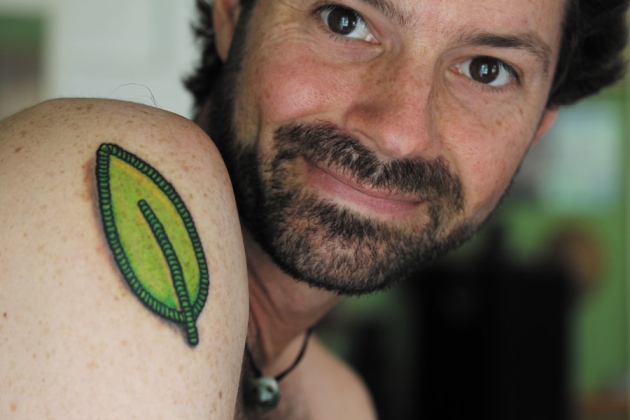 Some contributors to citizen-science initiatives, such as Project Noah, sport a tattoo of the project’s logo.

The family of ‘@home’ volunteer computing projects is growing ever more diverse. Spare time on a personal computer can now be donated to anything from finding alien life to crunching climate models or processing photos of asteroids. But enthusiasm is waning. The 47 projects hosted on BOINC, the most popular software system for @home efforts, have 245,000 active users among their 2.7 million registrants, down from a peak of about 350,000 active users in 2008 (see ‘Slumping @home’).

David Anderson, the founder of BOINC (Berkeley Open Infrastructure for Network Computing) and a computer scientist at the University of California, Berkeley, has several explanations for the slip. He says media coverage has declined now that volunteer computing is more than 15 years old. A shift to mobile-computing devices has probably also hurt — BOINC can run on an Android phone while charging, but uses too much battery power when unplugged. And the site has been unable to attract a broad demographic of volunteers.

“Essentially, we have a bunch of middle-aged, male computer nerds,” says Anderson. “We have thought long and hard about ways to break out of that category, using Facebook, for example, but none of that has been all that successful.”

On 20–22 February, at the 3rd Citizen Cyberscience Summit in London, conference-goers will trade tips on how to entice volunteers into projects ranging from BOINC-style distributed computing to more-active ‘citizen-science’ projects, in which users are asked to donate not just their time but also their brains.

The desire to keep numbers up is not just academic. If distributed computing flourishes, serious money can be saved, says Francois Grey, coordinator of the Citizen Cyberscience Centre, based in Geneva, Switzerland. He notes that the Chinese Academy of Sciences in Beijing has been monitoring the economic benefits of CAS@home, which uses volunteers’ computing time for projects such as predicting protein structures. The academy estimates that US$20 million has been saved since it launched CAS@home in September 2010, by using donated computing power rather than buying it from a company such as Amazon. 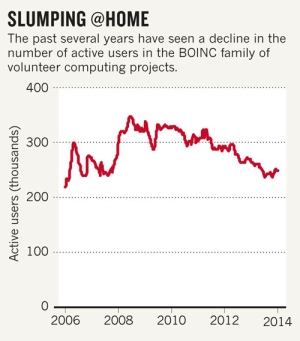 Grey predicts that funding bodies might at some point enforce the use of volunteer computing whenever possible, rather than allowing grant money to be used for supercomputer time or cloud-based services. “It’s very delicate. There are big IT companies with vested interests in selling supercomputers to universities,” he says. “But I think it’s something that will happen at some point.”

For volunteer computing to be used in a bigger way, participation rates need to keep up. Perhaps the most obvious motivator — money — is deemed a bad idea. “Small amounts of money are too trivial, and may be almost insulting,” says Grey. “It goes against the idea of volunteering.” Only one BOINC project — IBM’s World Community Grid, an umbrella initiative that oversees a batch of biomedical projects aimed at goals such as drug discovery — has partnered with a scheme that allows volunteers to earn virtual cash (which can be exchanged for real money) for their time. This had a measurable but small overall impact, says Anderson, earning the grid as many as 15,000 new volunteers, bringing the total so far up to almost 650,000.

A more powerful motivator is pleasure. This can be achieved by turning participation into a game. FoldIt, for example, asks volunteers to optimize protein folding, which requires a mix of intellect and intuition that some describe as similar to chess. Competition can also provide pleasure. Many projects offer scoreboards and awards such as virtual titles or badges to mark progress; some people have become so devoted that they have had the badges tattooed on their bodies. In the BOINC world, groups of volunteers have formed teams that compete to donate the most time over a designated period. These competitions offer a short-term boost, but the effect wears off, says Anderson.

Engaging participants in the core science mission is by far the best motivator, says Oded Nov, who studies links between new technologies and human behaviour at New York University. That includes giving participants credit in scientific papers and showing them how their help is advancing research. The World Community Grid, for example, hosts regular Q&A sessions with its project scientists. “Education is a great motivator,” says Nov.

That could be one reason why the Zooniverse — the largest host of citizen-science schemes — has not seen a decline in participation. Its family of 22 projects asks volunteers to do everything from identifying galaxy types in astronomical images to transcribing historical weather records. Robert Simpson, a developer and head of communications for the Zooniverse team, says that the five-year-old scheme has 930,000 registered participants and that there is fairly consistent interest in new projects.

Quantifying the effects of different motivational tools is difficult, says Grey, whose cyberscience centre has received funding to explore the possible benefits of common rules and credit schemes across different platforms such as BOINC and the Zooniverse. “Because of its grass-roots nature, everyone’s doing their own thing; there’s no common metric,” he says.

One thing is certain: there is still plenty of spare brainpower to access. “US citizens alone spend 200 billion hours watching television a year,” says Simpson. “We only need to tap a tiny fraction of that.”