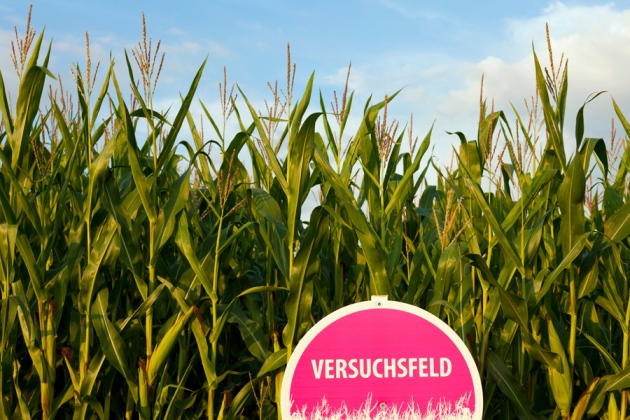 A trial field of GM maize in Germany, where many consumers are opposed to the technology.

After years of political deadlock and legal wrangling, the European Union appears to have reached a compromise on the approval process for the cultivation of genetically modified crops.

In the late hours of 3 December, representatives of member states and the EU Parliament hashed out an agreement to waive the principle that every member state honour EU approvals of GM crops. Instead, each member state will have the power to overrule EU approvals in their country. This means that EU approval of several GM crops that have been in limbo for years is now likely to now move forward.

“It means that those who don’t want to ignore the science can go ahead and use the science more easily” despite the opposition of GM-sceptic countries, says Jonathan Jones, a plant researcher at the Sainsbury Laboratory in Norwich, UK.

Jones says that the compromise should mean that GM crops can be approved more easily in the EU. Consumers in Europe have historically been more hostile to such plant-modification technologies than in the United States, and the approval gridlock has prompted some biotechnology companies to give up on the EU.

At present, the process for gaining EU approval to cultivate a GM crop requires the European Food Safety Authority to produce a risk assessment for the European Commission. The commission is then supposed to come to a decision, which has to be approved by a qualified majority of member states. But faced with opposition to GM food from some member states, the commission has delayed action on several crops for years. The application for a variety of maize (corn) known as Bt11, for instance, has languished on regulators’ desks since 1996. Further complicating the matter, some countries have enacted bans on the cultivation of GM crops, the legality of which has been questioned.

The European Commission will now introduce legislation to enshrine the right of member states to ban cultivation in their jurisdictions. This agreement has to be approved by the full EU Parliament and a separate committee of member-state representatives, but policy-watchers view it as likely to pass and to be in force by spring of 2015.

The EU commissioner of health and food safety Vytenis Andriukaitis said in a statement that the deal was “a significant step forward, after 4 years of intense debates”. It would, he said, “give the democratically elected governments at least the same weight as scientific advice when it comes to important decisions concerning food and environment”.

EuropaBio, a biotechnology industry group based in Brussels that has been pushing for GM crop approvals for years, responded unhappily to the news. A spokesman said that the compromise is a “non-cultivation agreement” that involves “rejecting modern technologies on non-scientific grounds”. Groups opposed to GM crop cultivation have also expressed disappointment. Greenpeace complained that the agreement does not allow countries to ban crops on the basis of suggestions of environmental harm and could leave them open to legal challenges from industry.

Huw Jones, a plant researcher at Rothamsted Research in Harpenden, UK, says that European attitudes have already resulted in biotech companies moving out of the continent. “While I doubt this agreement will reverse this trend in the short term,” he says, “I hope it will rekindle innovation in EU applied crop research and plant breeding.”