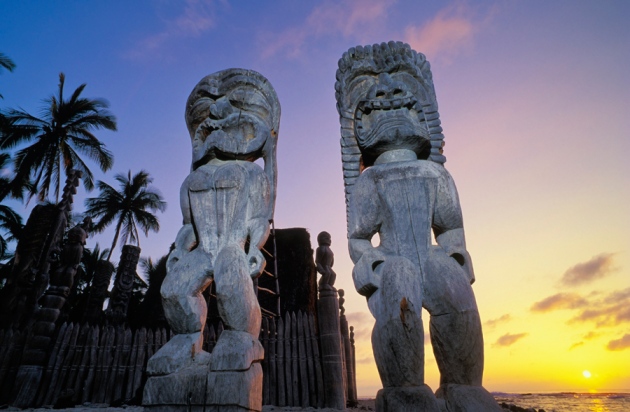 All human societies have been shaped by religion, leading psychologists to wonder how it arose, and whether particular forms of belief have affected other aspects of evolved social structure. According to one recent view, for example, belief in a "big God" — an all-powerful, punitive deity who sits in moral judgement on our actions — has been instrumental in bringing about social and political complexity in human cultures.

But a new analysis of religious systems in Austronesia — the network of small and island states stretching from Madagascar to Easter Island  — challenges that theory. In these states, a more general belief in supernatural punishment did tend to precede political complexity, the research finds, but belief in supreme deities emerged after complex cultures have already formed1.

Joseph Watts, a specialist in cultural evolution at the University of Auckland in New Zealand, who worked on the study, wanted evidence to examine the idea that "big Gods" drive and sustain the evolution of big societies. Psychologist Ara Norenzayan at the University of British Columbia in Vancouver, Canada, has suggested that belief in moralizing high gods (MHGs) enabled societies to outgrow their limited ability to police moral conduct, by threatening freeloaders with retribution even if no-one else noticed their transgressions2, 3.

The most common examples of religions with MHGs — Christianity and Islam, the dominant representatives of so-called Abrahamic religions — are relatively recent and obviously postdated the appearance of complex societies. But the question is whether earlier MHGs, for example in Bronze Age civilisations, catalysed sociopolitical complexity or resulted from it.

Rather than searching for statistical associations between social complexity and religious beliefs, researchers need ways to untangle cause and effect, Watts says. “Austronesian cultures offer an ideal sample to test theories about the evolution of religions in pre-modern societies, because they were mostly isolated from modern world religions, and their indigenous supernatural beliefs and practices were well documented," he says.

Watts and his colleagues pruned the 400 or so known Austronesian cultures down to 96 with detailed ethnographic records, excluding any in which contact with Abrahamic religions might have had a distorting outside influence. They range from native Hawaiians, who hold polytheistic beliefs, to the Merina people in Madagascar, who believe in a supreme God.

The team considered two classes of religion: MHGs and a broader belief in systems of supernatural punishment (or 'BSP') for social transgressions, such as those enacted through ancestral spirits or inanimate forces such as karma. Although both schemes see religious or supernatural agents as imposing codes of moral conduct, BSP does not assume a single supreme deity who oversees that process.

Six of the cultures had MHGs, 37 had BSP belief systems and 22 were politically complex, the researchers concluded. They used trees of evolutionary connections between cultures, deduced from earlier studies of linguistic relationships, to explore how the societies were inter-related and exchanged ideas. That in turn allowed them to test different hypotheses about MHGs and BSPs — for example, whether belief in MHGs precedes (and presumably then stabilizes) the emergence of political complexity.

“I think the ordering of events these authors prefer is what one expects from first principles,” says evolutionary biologist Mark Pagel of the University of Reading, UK. He says that societies became more politically complex as networks of trade and reputation emerged, and that the key to this process was language, not religion.

So what are MHGs for? “They are tools of control used by purveyors of religion to cement their grip on power,” says Pagel. “As soon as you have a large society generating lots of goods and services, this wealth can be put to use by someone who can grab the reins of power. The most immediate way to do this is to align yourself with a supreme deity and then make lists of things people can and cannot do, and these become ‘morals’ when applied to our social behaviour.”

Anthropologist Hervey Peoples at the University of Cambridge, UK, says that there is good evidence that, even if MHGs do not drive political and social complexity, they can affect and stabilize it. “This study is impressive and innovative, but may be hard to generalize,” she adds.

Norenzayan agrees. "In Austronesia, social and political complexity has been limited", he says. "There have been cases of chiefdoms but there has not been a single state-level society. So it's not all that surprising that big moralizing gods don't play a central role." He argues that such gods did co-evolve with the very large, state-level societies typically found in Eurasia. The "big Gods" idea was never supposed to hold true everywhere, he says.