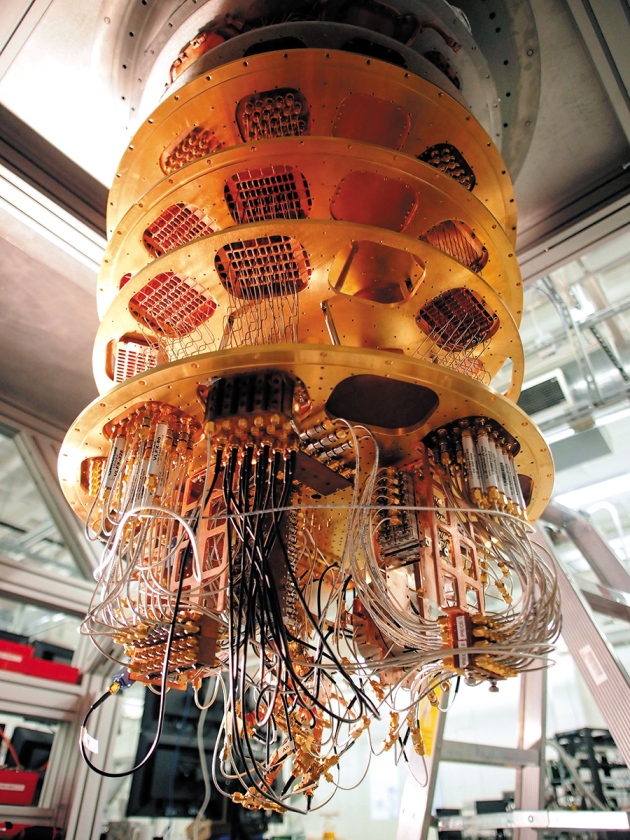 From aspects of quantum entanglement to chemical reactions with large molecules, many features of the world cannot be described efficiently with conventional computers based on binary logic. The solution, as physicist Richard Feynman realized three decades ago1, is to use quantum processors that adopt a blend of classical states simultaneously, as matter does. Many technical hurdles must be overcome for such quantum machines to be practical, however. These include noise control and improving the fidelity of operations acting on the quantum states that encode the information.

The quantum-computing community is channelling most of its efforts towards building the ultimate machine: a digital quantum computer that tolerates noise and errors, and that in principle can be applied to any problem. In theory, such a machine — which will need large processors comprising many quantum bits, or qubits — should be able to calculate faster than a conventional computer. Such capability is at least a decade away2. Correcting for errors requires redundancy, and the number of qubits needed quickly mounts. For example, factorizing a 2,000-bit number in one day, a task believed to be intractable using classical computers3, would take 100 million qubits, even if individual quantum operations failed just once in every 10,000 operations. We have yet to assemble digital quantum processors with tens of qubits.

This conservative view of quantum computing gives the impression that investors will benefit only in the long term. We contend that short-term returns are possible with the small devices that will emerge within the next five years, even though these will lack full error correction.

A lack of theoretical guarantees need not preclude success. Heuristic 'hybrid' methods that blend quantum and classical approaches could be the foundation for powerful future applications. The recent success of neural networks in machine learning is a good example. In the 1990s, when the computing power required to train deep neural networks was unavailable, it was fashionable in the field to focus on 'convex' methods (based on functions with a clear minimum solution) that had a strong theoretical basis. Today, these methods are no match for deep learning. The underlying algorithms of neural networks have hardly changed, yet impressive new performance milestones are being reached, thanks to 'Moore's law'.

Similarly, although there is no proof today that imperfect quantum machines can compute fast enough to solve practical problems, that may change. The scale, fidelity and controllability of analog and digital quantum hardware are improving steadily. We anticipate that, within a few years, well-controlled quantum systems may be able to perform certain tasks much faster than conventional computers based on CMOS (complementary metal oxide–semiconductor) technology.

Capitalizing on imminent advances in quantum technologies requires that the discipline broadens its focus and that scientists work more closely with entrepreneurs. Hardware improvements are needed to make devices reliable and controllable enough to be commercialized. Heuristic quantum algorithms need to be developed that address practical problems within the current hardware limitations. As researchers working on quantum computing at Google, we plan to provide access to our quantum processors through cloud services to facilitate the development and benchmarking of quantum algorithms and applications across industries, delivering real benefit to society.

If certain feasible technological improvements are achieved, we believe that emerging quantum processors have a good chance of carrying out the following classes of computational tasks and could become commercially valuable within a few years.

Quantum simulation. Modelling chemical reactions and materials is one of the most anticipated applications of quantum computing. Instead of spending years, and hundreds of millions of dollars, making and characterizing a handful of materials, researchers could study millions of candidates in silico. Whether the aim is stronger polymers for aeroplanes, more-effective catalytic converters for cars, more-efficient materials for solar cells, better pharmaceuticals or more-breathable fabrics, faster discovery pipelines will bring enormous value.

Computational materials discovery is already a large industry. Quantum computers promise a radical transition: from the qualitative and descriptive to the quantitative and predictive. Chemical-reaction rates are extremely sensitive to molecular energies and span a range wider than classical methods can handle. If robust algorithms are developed, it might be possible to simulate important materials without the overhead of full quantum error correction4. For example, algorithms are already known (such as the 'quantum variational eigensolver' approach) that seem to be immune to qubit control errors.

A variety of business models could supply quantum simulators. Laboratories might pay a subscription for access. Computing companies could act as consultants. Some businesses might exchange equity in return for quantum-assisted breakthroughs that lead to innovative material developments.

Quantum-assisted optimization. A central and difficult computational task in all quantitative disciplines of physical and social sciences, and across industries, is optimization. Such problems are difficult to solve with conventional computers because algorithms can navigate only slowly through the mathematical landscape of possible solutions; good solutions may be hidden behind high barriers that are hard to overcome. The most general classical algorithms use statistical methods (such as thermal energy distributions) to 'jump' over these barriers. We believe that this type of classical sampling could be enhanced by occasionally invoking quantum phenomena such as tunnelling (whereby quantum information is transmitted through barriers) to find rare but high-quality solutions. 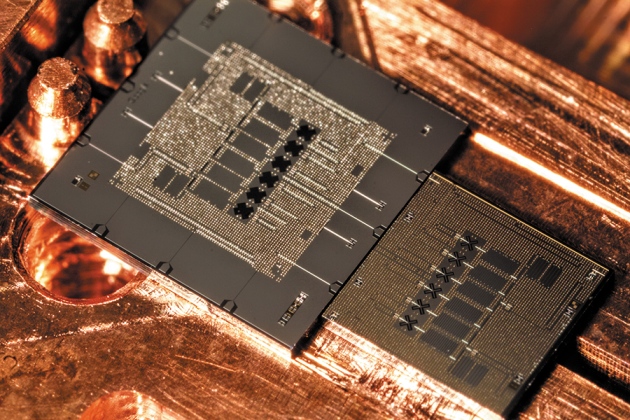 The smaller of these chips, a 6-mm square, holds 6 qubits.

For example, online recommendations and bidding strategies for advertisements use optimization algorithms to respond in the most effective way to consumers' needs and changing markets. More-powerful protocols, based on a combination of quantum and classical solvers, could improve the quality of products and services in many industries. Logistics companies need to optimize their scheduling, planning and product distribution daily. Quantum-enhanced algorithms could improve patient diagnostics for health care. The quality of search or product recommendations for large information-technology companies such as ours, Microsoft, Amazon and Facebook could be enhanced.

In fact, sampling from distributions with such a shallow quantum circuit is likely to constitute the first example of 'quantum supremacy'. This term was coined by theoretical physicist John Preskill6 to describe the ability of a quantum processor to perform, in a short time, a well-defined mathematical task that even the largest classical supercomputers (such as China's Sunway TaihuLight) would be unable to complete within any reasonable time frame. We predict that, in a few years, an experiment achieving quantum supremacy will be performed.

Among promising applications of quantum sampling are inference and pattern recognition in machine learning. To facilitate experimentation across academia and industry, we plan to offer access to the quantum hardware through a cloud-computing interface.

Several technological challenges must be overcome for quantum computing to be commercialized. Quantum hardware needs to be scaled up to compete with classical hardware, which has been improving exponentially for decades. Qubits require quantum coherence, which leads to quantum entanglement, by analogy with how classical circuits require transistors with gain. Combining scaling and coherence is the big challenge of quantum systems engineering. It is fundamentally difficult because quantum information cannot be copied and subsystems are entangled, leading to design trade-offs that are global in nature.

We think that superconducting qubits are one of the most promising hardware platforms for quantum computers. Based on standard integrated-circuit and superconducting technologies, they are relatively easy to construct and control. And there are many possible designs that might suit different requirements for digital and analog quantum processors. High-fidelity systems of around ten qubits have been demonstrated, showing the feasibility of the engineering concepts.

New technologies are emerging that could aid scalability, such as superconducting bump bonds — a two-layer architecture for information-processing units and control circuits. Prototype 'quantum annealers' of about 1,000 qubits are already available commercially7, 8. (These are analog quantum processors that could find good-quality solutions for certain optimization tasks.)

Several improvements are required for today's imperfect quantum devices to be practical. Shallow quantum circuits need higher gate fidelities and more stability to limit decoherence. Quantum-annealing hardware needs to be improved with respect to connectivity, control precision and coherence times, as well as having access to alternative annealing schedules9. 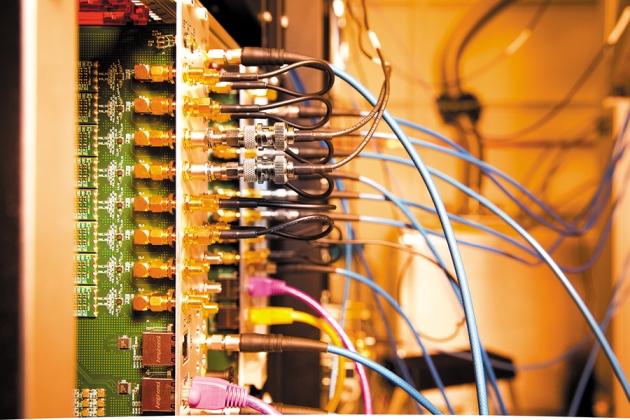 Radio-frequency and microwave electronics are used at Google to make scalable control hardware.

A new technology can improve business in three ways: by increasing revenue, reducing costs or lowering investments in infrastructure. In the digital era, introducing a new technology has an exponential impact: even a 1% gain in product quality can help a company to achieve overwhelming growth in terms of user numbers or revenue10. This is the 'superstar effect', which assumes close competition, transparency and an efficient market.

If early quantum-computing devices can offer even a modest increase in computing speed or power, early adopters will reap the rewards. Rival companies would face high entry barriers to match the same quality of services and products, because few experts can write quantum algorithms, and businesses need time to tailor new algorithms. The markets that are most open to such disruptions are information-rich and digital, and involve business challenges that rely on many variables. Such markets include financial services, health care, logistics and data analytics.

Making a business case requires companies to examine demand and supply. Demand can be assessed as follows. First, identify the 'minimal viable products' — early quantum innovations with just enough core features to enter the market. Estimate whether the innovation solves an existing need (product–market fit), the time it would take to commercialize the product (speed to market) and the market's response (business traction).

For example, encryption breaking — often portrayed in the media as a 'killer application' for digital quantum computers — does not score highly in terms of market fit. It will one day be superseded by cryptosystems that are immune to quantum attack. And most private enterprises are uninterested in breaking encryption systems. By contrast, portfolio optimization and risk management need immediate data feedback and could benefit from quantum-enhanced models11. More efficient quantum-chemistry calculations would revolutionize the development of pharmaceuticals, catalytic converters, solar cells and fertilizers.

Quantum-assisted optimization and inference techniques could empower new machine-learning and artificial-intelligence systems. These could improve the management of renewable power generators, and of remote-sensing and early-warning systems. The techniques would also aid dynamic pricing for online goods and services, as well as warehouse automation and self-driving cars.

On the supply side, companies will distinguish themselves through the quality of their technology and teams. Pioneering quantum academics and entrepreneurs will have to work together. This will be challenging because academic incentives are often inconsistent with those of start-up cultures and industry.

Strategic partnerships can help businesses to stand out. To attract venture capitalists, the winning quantum products should have business models that require few assets, are low on manufacturing costs and clearly help customers to increase their revenues. Through the cloud, a company could benefit from using existing data centres when applying classical solvers to simple problems, and invoke quantum processors when it matters.

The field of quantum computing will soon achieve a historic milestone — quantum supremacy. It is still unknown whether application-related algorithms will be able to deliver big increases in speed using the sorts of processors that will soon be available. But when quantum hardware becomes sufficiently powerful, it will become possible to test this and develop new types of algorithms.

Over the next decade, academia, industry and national labs should work together to develop quantum simulation and quantum machine-learning algorithms. We plan to support such research by offering access to Google's quantum processors through cloud services to others that lack the necessary capital, expertise or infrastructure.

Google plans to offer access to its emerging quantum processors via a cloud computing service.