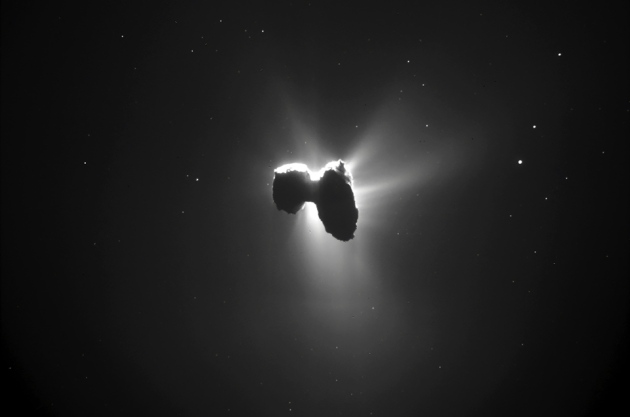 The Rosetta comet orbiter will meet a sticky end on 30 September, but not before a finale that should see it gather the most detailed images yet of 67P/Churyumov–Gerasimenko — or indeed of any comet.

In 2014, after a ten-year journey through deep space, Rosetta, operated by the European Space Agency (ESA), became the first craft ever to orbit a comet. Two years later, the orbiter is losing solar power as it speeds away from the Sun, and ESA scientists have opted to end the mission in style, with a controlled crash into the comet’s surface. “I love the idea that Rosetta will be resting on the comet surface for many thousands of years — it’s a fitting resting place for an amazing satellite,” says Laurence O’Rourke, an ESA astrophysicist and engineer.

Engineers at the European Space Operations Centre (ESOC) in Darmstadt, Germany, will set Rosetta on a collision course with the comet at around 20:50 utc on 29 September. The target is a 700-by-500-metre zone on the head of the rubber-duck-shaped comet, close to a 130-metre wide pit in a region named Ma’at, which is known for expelling gas and dust (see ‘Rosetta’s last hours’). 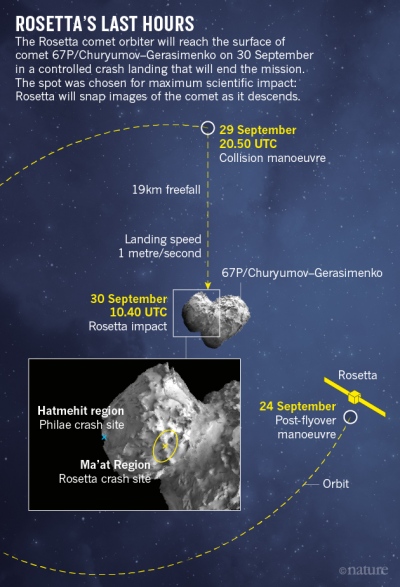 The crash site is around 2 kilometres away from the final resting place of Philae, the probe that landed in November 2014 but soon ran out of power. The trajectory of Rosetta's descent — a 13.5-hour freefall of around 19 kilometres — is designed to maximize sunlight and will not afford the orbiter a view of Philae. But the final flyby is expected to include spectacular images from elsewhere on the comet, perhaps as close as 15 metres from the surface and with resolution as high as mere millimetres per pixel. Rosetta has not previously been closer than 1.9 kilometres to its comet.

Rosetta scientists hope to use the cameras to see intriguing structures in the walls of the Ma'at pit that might hint at how comet 67P/Churyumov–Gerasimenko formed. Other instruments will chart gas, dust and ionized particles at an unprecedented range. “It’s a chance to get really unique science,” says Patrick Martin, mission manager for Rosetta. For the final images, Rosetta will have to race to send back precious data before it crashes seconds later. “It’s going to be really challenging,” adds Martin.

Resources are at a premium. At almost 575 million kilometres from the Sun, Rosetta is already operating on low power, and its increasing distance from Earth means that the speed with which it can transfer data is also dropping. To eke out the most science from the descent, scientists broadly agreed on which instruments would operate, with 3 of 11 teams volunteering to turn their instruments off, says Martin.

Rather than disintegrate on impact, the orbiter will perform a gentle crash-landing, striking the comet at a slow walking speed (around 1 metre per second) at 10:40 utc. But because Rosetta is not designed to land, even this could cause its 32-metre-wide solar-panel wings to snap, and the craft to tumble and bounce.

Exactly how Rosetta meets its end is likely to remain a mystery, because the craft will stop communicating with Earth after impact. The crash will trigger commands that shut down Rosetta even if the orbiter is intact, in order to comply with international regulations aimed at avoiding interference from deep-space network communication channels. (Even without this requirement, it's very unlikely that Rosetta, once crashed, would be capable of communication — because it will be unable to point its antenna in Earth's direction).

Rosetta’s distance from Earth means that news of the craft’s demise will come around 40 minutes after impact, when ESOC’s mission control expects to see Rosetta’s characteristic communication signal flat-line, at around 11:20 utc, or 13:20 local time. “For sure, it’s going to be a sad time for me,” says O’Rourke.