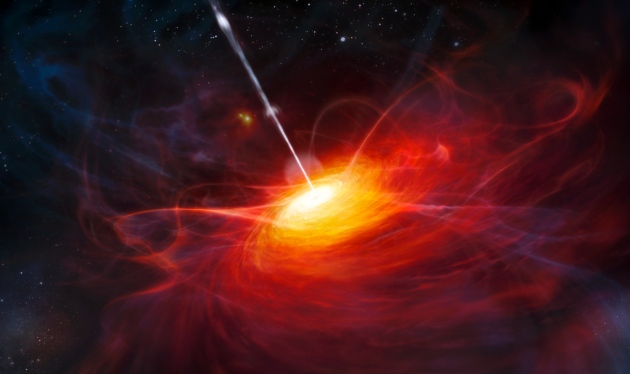 A quasar in the Leo constellation.

Some of the brightest objects in the Universe — quasars — are vanishing rapidly. Astronomers now think that they understand this mysterious behaviour1, 2, and the answer could help them to explain how galaxies such as the Milky Way evolve.

Quasars are supermassive black holes at the centres of galaxies fed by huge quantities of gas that shine across the visible Universe. Astronomers have long thought that quasars persist for millions of years before dimming slowly over tens of thousands of years. But in 2014, Stephanie LaMassa, an astronomer now at the Space Telescope Science Institute in Baltimore, Maryland, discovered a quasar that seemed to disappear in less than ten years3. That’s a blink of an eye, astronomically speaking.

Researchers struggled to explain the oddity. Perhaps a massive dust cloud passed in front of the quasar’s bright beacon and momentarily blocked its light. Or maybe a star passed too close to the black hole and was rapidly torn apart, causing a bright flare that scientists mistook for a quasar. It seemed physically impossible that such a bright object could fade in such a short time.

The discovery set in motion the hunt for more of these ‘changing-look’ quasars. The search has identified dozens of these mysterious beasts, some of which have dimmed more dramatically than the first. The two studies published this month on the preprint server arXiv suggest that these quasars blaze out of existence because the amount of gas and dust flowing through their accretion disks — the swirl of hot matter that encircles a black hole — drops dramatically. In effect, the black hole starves.

In one study, Zhenfeng Sheng, an astronomer at the University of Sciences and Technology of China in Hefei, and his colleagues peered closely at ten changing-look quasars that had been previously imaged by the Sloan Digital Sky Survey and NASA’s Wide-Field Infrared Survey Explorer1. By looking at these quasars in both optical and infrared wavelengths, the team could probe both the quasar’s accretion disk and its torus — the doughnut-shaped ring of dust clouds that wraps around it.

The other study, led by astronomer Damien Hutsemékers of the University of Liège in Belgium, reinforces this idea. Hutsemékers’ team examined the light emanating from a single changing-look quasar. Some of this light is polarized as it passes through regions around the quasar that are thought to be rich in electrons, just as molecules in Earth's atmosphere scatter and polarize light from the Sun.

Nicholas Ross, an astronomer at the University of Edinburgh, UK, says that the two studies’ results are intriguing, if preliminary.

A peek at primordial galaxies

If astronomers can pin down the mechanism behind changing-look quasars, and the timescales on which these objects wink out of existence, it could help them to better understand how galaxies evolve.

Every massive galaxy is thought to have hosted a quasar in its early years. The supermassive black holes in quasars can release winds strong enough to halt star formation in a young galaxy. Over time, a galaxy that hosted a stable quasar for long periods may look very different to one with a quasar that behaved unpredictably. One way to think about it is to picture two identical bathtubs full of water, says Meg Urry, an astronomer at Yale University in New Haven, Connecticut. Pouring a cup of boiling water into one and a couple of litres of lukewarm water into the other would give bathers very different experiences, she notes.

Uncovering the inner workings of changing-look quasars could also help astronomers to trace how gas and dust flows into a black hole. Although the latest results suggest that changing-look quasars dim dramatically because they run out of fuel, researchers still can’t explain how that would happen in such a short time.

But LaMassa, who was one of the chairs of the first conference on changing-look quasars in July along with Ross, thinks that the field is on the right track. “There are a lot of questions still to be answered,” she says. “But I think we’re asking the right questions and going in the right direction.”