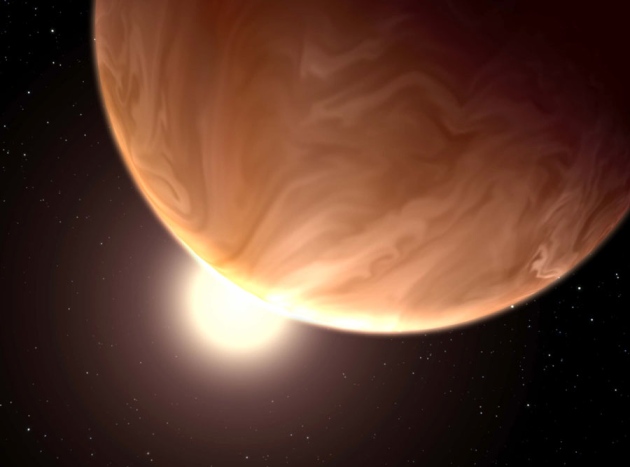 An artist's view of the extrasolar planet GJ 1214b, which scientists say has an atmosphere thick with clouds.

One of the best-studied nearby extrasolar planets — a body just a little larger than Earth — is swaddled in alien clouds, researchers have found. It is the smallest and most Earth-like world yet to yield the secrets of its atmosphere. Another study has found tantalizing hints of clouds on a larger, Neptune-sized world. The pair of discoveries, reported today in Nature1, 2, suggests that clouds may envelop many exoplanets.

“We always knew the clouds must be there for some planets, but now we have a wave of results telling us that clouds are actually very common,” says Heather Knutson, a planetary astronomer at the California Institute of Technology in Pasadena and lead author of the second paper.

The two planets are among the closest to our Solar System to have been found so far. The super-Earth discovery involves GJ 1214b, just 13 parsecs (about 42 light years) from us, which whirls around a red dwarf star once every 38 hours. As the planet passes across the star’s face, some of the starlight should filter through the planet's atmosphere, revealing its composition.

In 2010, scientists reported finding no imprint of GJ 1214b's atmosphere in the spectrum of light from its host star (see ‘A gaze at exoplanet haze’). Researchers speculated that clouds could be blocking the background starlight from getting through.

Another possible explanation was that the planet's atmosphere was made mostly of heavy molecules, such as water, rather than lightweight hydrogen. If this were the case, then the planet's gravity would compress its atmosphere into a thin, dense layer. This thin layer shrinks the size of features in the spectrum to below what the measurements could detect.

At the time, researchers could not distinguish between these two options. Now, observations from the Hubble Space Telescope show that clouds must be present.

A team led by Laura Kreidberg, of the University of Chicago in Illinois, studied near-infrared light filtering around GJ 1214b during 15 of its passages in front of its star. This gave the scientists enough data to have seen the spectral imprint of a water-rich atmosphere had it been there. They saw nothing, and concluded that the planet must be swathed in clouds.

Kreidberg says that the atmosphere could still be made mostly of water vapour. “But we found there also have to be clouds,” she says.

Those clouds would be unlike any on Earth, given the temperatures and pressures in the exoplanet's atmosphere. They could be made of zinc sulphide, for example, or potassium chloride, as both of these compounds would condense into microscopic droplets, and thus form clouds, under such conditions. “It’s the first time that we’ve been able to characterize the atmosphere of an exoplanet smaller than Neptune,” says Kreidberg.

Similar clouds may also enshroud the larger, Neptune-sized world known as GJ 436b, located about 10 parsecs (33 light years) away. Knutson and her colleagues targeted this planet because the extensive studies of it have made it an archetype of many similarly sized exoplanets. Like Kreidberg’s team, these scientists also used the Hubble telescope to watch changes in a star’s light as the planet passed in front of it.

Once again, the star’s spectrum showed no imprint of the planet's atmosphere. And once again, the options are either a cloudy atmosphere or one that is weighed down by heavy molecules such as water or methane.

Neptune is made mostly of hydrogen and helium, so a Neptune-sized object with a heavy atmosphere would defy expectations, says Knutson. “We thought this was just a Neptune analogue, but if it doesn’t have a lot of hydrogen we have to think harder about how you would build a planet like that,” she says.

Both studies show that more and more exoplanets are turning out to have clouds, says Julianne Moses, a planetary scientist at the Space Science Institute in Boulder, Colorado. In October, a team led by scientists at the Massachusetts Institute of Technology in Cambridge reported mapping clouds on two different hemispheres of a planet called Kepler-7b3. 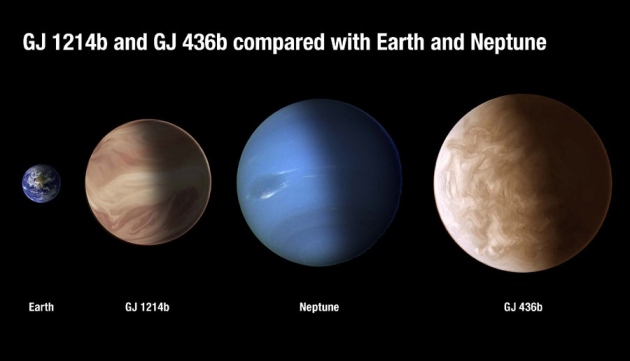