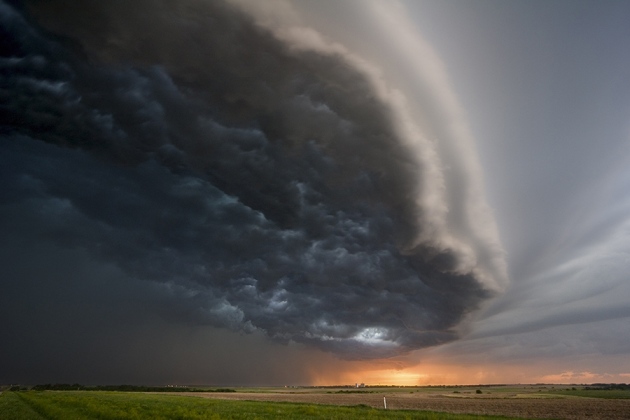 A line of storm clouds rolls over Kansas.

Clouds are moving up, up and away. An analysis of satellite data has found that, since the early 1980s, clouds have shifted towards Earth’s poles and cloud tops have extended higher into the atmosphere.

“It’s really the first credible evidence that we have of climate change and clouds in the observed record,” says Joel Norris, an atmospheric scientist at the Scripps Institution of Oceanography in La Jolla, California. Norris and his colleagues describe the work on 11 July in Nature1.

Clouds are both hard to observe and difficult to simulate in climate models, says Katherine Marvel, a climate researcher at NASA’s Goddard Institute for Space Studies in New York City. This is because researchers have to cobble together data on cloud patterns from existing satellite observations. These are designed to collect information on short-term weather trends, not the long-term behaviour needed for climate models.

Norris’s team tried to get around this issue by purging satellite data of misleading readings, such as those produced by sensors that have degraded over time. The scientists used two long-term databases of cloud cover, along with measures of water content over the oceans and of Earth’s reflectivity — or how much sunlight the planet's surface throws back into space.

By 2009, the team found that there were fewer clouds over the mid-latitudes than there had been in 1983. That finding meshes with climate predictions that dry zones will expand out of the subtropics and push storms towards the poles. The team also found that cloud tops rose higher in the atmosphere by the end of the 2000s, again as predicted for a warming atmosphere.

Norris and his colleagues “have done a great job using the satellite record in an appropriate way”, says Ryan Eastman, an atmospheric scientist at the University of Washington in Seattle. In 2013, he and a colleague used ground-based observations of clouds to describe some of the same trends. Their study also noted that clouds were declining in middle latitudes as storms shifted poleward2. The new work meshes well with the earlier findings, Eastman says.

The fact that observations match the model predictions is worrying, says Veerabhadran Ramanathan, an atmospheric scientist at the Scripps Institution of Oceanography who was not on the team. If models really are starting to get clouds correct, it suggests that the planet may warm on the higher end of estimates over the coming century, he says.

Still, the story remains complicated. The cloud shifts match what scientists would expect from increasing greenhouse-gas emissions, but also what happens in the aftermath of large volcanic eruptions that spew particles into the atmosphere. Researchers need to dig a little more to tease out the relative roles of greenhouse gases and volcanoes, Marvel says.

Norris aims to do that next. “The data aren’t hopeless,” he says. “There’s more here than we thought.”