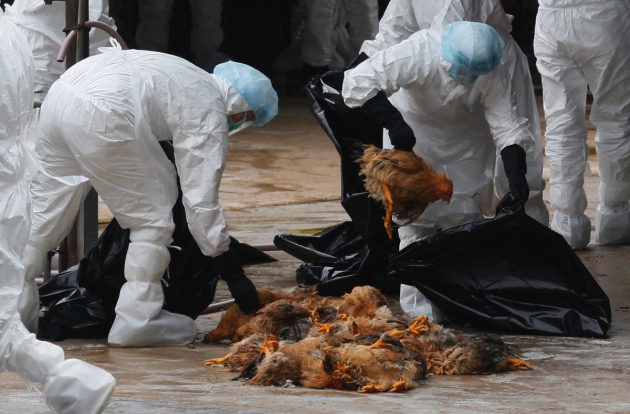 More than 17,000 chickens were culled in Hong Kong last month after one was found to have H5N1.

“I don’t like to scare people,” says microbiologist Paul Keim. “But the worst-case scenarios here are just enormous.”

Keim, who chairs the US National Science Advisory Board for Biosecurity (NSABB), is reflecting on its unprecedented recommendation to censor two scientific papers describing how to make a more transmissible form of the H5N1 avian flu virus. On 20 December, the board said that although the general conclusions could be published, the papers (currently under review at Nature and Science) should not include “the methodological and other details that could enable replication of the experiments by those who would seek to do harm”.

That advice has brought the NSABB flak from all sides. Although the board has said that selected researchers should have access to the full details of the work, some scientists have accused it of trying to curtail academic communication, and suggest that partial publication could hamper research intended to help to defend humans against a flu pandemic. Others complain, however, that the NSABB has done too little, too late, to protect the world from a potentially dangerous man-made pathogen.

Perhaps most worryingly, some argue that the NSABB — a purely advisory body — is not equipped to oversee research that could pose a biosecurity threat. “The NSABB was set up not to do anything,” says John Steinbruner, a security expert at the University of Maryland in College Park. “It is just a way of pretending there is some kind of oversight when there isn’t.”

The roots of the NSABB go back to the 2001 anthrax attacks in the United States, when letters laced with the pathogen killed five people and infected more than a dozen others. The attacks prompted calls to limit the publication of scientific research that terrorists could use to design biological weapons. Scientists in turn feared that the government would step in to regulate sensitive work. “There was a sense, whether right or wrong, that if the community did not act to protect the integrity of science, government would overreach and there would be censorship,” recalls Ronald Atlas, a microbiologist at the University of Louisville in Kentucky, who at the time was president-elect of the American Society for Microbiology. That society was one of many that pushed for a system in which researchers would regulate themselves, with the help of an advisory board made up of scientists. The US government agreed, and the NSABB was born in 2004.

“We’re being accused of being the bad guys,” says Keim, based at Northern Arizona University in Flagstaff. “But most of what we’ve done is to push back against harsher regulations.” Since its inception, Keim says that the NSABB has only been asked to review six papers, including two in 2005 that described the reconstruction of the 1918 influenza virus that is thought to have killed more than 20 million people. In that case, the board recommended that the papers simply be amended to spell out the public-health benefits of the research.

But the stakes are higher for the H5N1 work, because the altered viruses readily spread between laboratory ferrets breathing the same air. If the same were true in humans, the new strains could combine H5N1’s high death rate — much higher than the 1918 flu — with seasonal flu’s rapid transmission (see Nature 480, 421–422; 2011). Add in uncertainties about the efficacy and availability of vaccines and drugs to combat the virus, and the risk of misuse becomes more frightening than any other case that the board has considered, says NSABB member Kenneth Berns, a microbiologist at the University of Florida in Gainesville.

The editors-in-chief of Nature and Science have both acknowledged the NSABB’s concerns, but say that they are reserving judgement about whether to censor the papers until the US government provides details of how it will allow genuine researchers to obtain redacted information.

Steinbruner is frustrated that no such mechanism exists. About five years ago, he and his collaborators studied a scenario similar to the H5N1 transmissibility studies, and realized that the government would need to construct a system to disseminate such information to a limited, vetted set of users (J. Steinbruner et al. Controlling Dangerous Pathogens: A Prototype Protective Oversight System; Center for International and Security Studies at Maryland, Univ. Maryland, 2007). He says they notified the NSABB of their findings, to no effect.

Keim says that working out how to distribute sensitive information is “not our job”, adding that it may fall to the US government’s Department of Health and Human Services (DHHS), possibly with guidance from the White House Office of Science and Technology Policy.

Other biosecurity experts say that the NSABB should have been involved in reviewing the H5N1 work earlier. “The time when action is needed is at the grant-application level,” says Laura Kahn, a security expert at Princeton University in New Jersey. But the NSABB can only evaluate a project when the DHHS explicitly asks it to do so. Keim and several other board members hope that in the future they will be asked to weigh in earlier.

“All along, we hoped to assist the US government in putting in place a much more far-reaching, proactive oversight system,” says David Relman, a microbiologist at Stanford University in Palo Alto, California, and a member of the board since it began. But “everything of this sort comes at some cost, not just in terms of work and burden and time, but also dollars and bodies”.

For security experts such as Steinbruner, the best solution is to replace the board, or to supplement its role, with a mandatory biosecurity oversight system. Even some scientists who have argued strongly in favour of self-regulation say that they have been disappointed by the NSABB’s performance. “I wanted to see them do more,” says Atlas.

He may get his wish. In the course of its deliberations over the H5N1 papers, the NSABB became aware of additional work on H5N1 transmissibility that was nearing publication. Keim says the board is now considering whether to recommend a voluntary moratorium on the publication of such work until the community can discuss further precautions to prevent misuse. He expects the board to vote on this in the next few weeks, and adds: “It is time for us to have a broad and global discussion.”