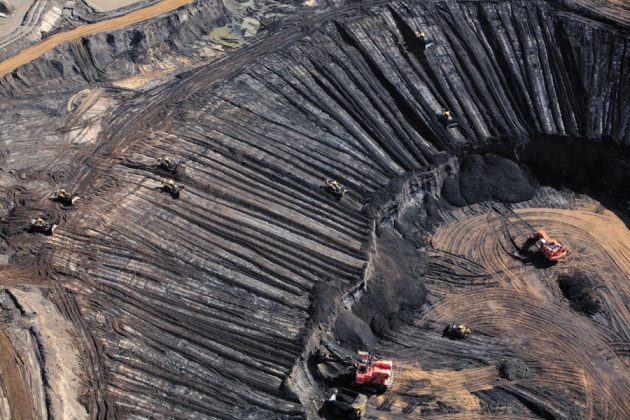 The tar sands of Alberta supply 7% of the oil used in the United States.

Environmental activist Bill McKibben has called it the “fuse to the biggest carbon bomb on the planet”. Famed US climate researcher James Hansen has warned that it would unleash a “monster”. And protestors have chained themselves to the White House fence, declaring that it would feed a nasty fossil-fuel addiction and enrich the oil industry while dooming the global climate.

The object of all that ire, the Keystone XL pipeline, is designed to carry crude oil some 1,900 kilometres from the tar sands of Alberta, Canada, to the US Midwest, where it will link into a network of pipelines supplying refineries on the Gulf of Mexico. Proponents say that it would provide North America with a secure source of energy and reduce dependence on overseas oil. But for environmentalists frustrated by a stalemate in Congress and repeated failures to secure an aggressive international climate treaty, the pipeline has become a key battle — one that they hope will trigger a popular uprising against unbridled fossil-fuel development.

The issue has also divided the scientific community. Many climate and energy researchers have lined up with environmentalists to oppose what is by all accounts a dirty source of petroleum: emissions from extracting and burning tar-sands oil in the United States are 14–20% higher than the country's average oil emissions. But other researchers say that the Keystone controversy is diverting attention from issues that would have much greater impact on greenhouse-gas emissions, such as the use of coal.

Some experts find themselves on both sides. “I'm of two minds,” says David Keith, a Canadian climate scientist who is now at Harvard University in Cambridge, Massachusetts. “The extreme statements — that this is 'game over' for the planet — are clearly not intellectually true, but I am completely against Keystone, both as an Albertan and somebody who cares about the climate.”

The pipeline's future rests with US President Barack Obama, who declared in June that Keystone would serve the national interest only if it “does not significantly exacerbate the problem of carbon pollution”. The debate now centres on the definition of 'significantly', which requires a bit of context.

Canada has an estimated 170 billion barrels of dense, viscous oil locked up in deposits of loose sandstone in Alberta. These tar sands, or oil sands, produced 1.8 million barrels of oil per day in 2012, and that figure is projected to nearly triple by 2030. More than two-thirds of that oil makes its way via pipelines to the United States, where it accounts for around 7% of US oil consumption. But the pipelines are reaching capacity, so companies looking to increase production must first figure out how to get their product out of Canada. Keystone is just the first step and would eventually carry some 730,000 barrels per day from the tar sands to US refineries. To meet the industry's production forecast, however, at least three more pipelines of comparable capacity will be needed.

A draft environmental-impact statement by the US Department of State found that halting the Keystone pipeline would have a minimal impact on the development of the tar sands, because oil companies would find other ways to get their product to market. In the short term, that means shipping by rail, which would increase emissions. But the state department's conclusions have come under fire from environmentalists as well as the US Environmental Protection Agency, which urged the state department to conduct “a more careful review” of the economic analysis for its final assessment.

There is cause for scepticism about the alternatives to the Keystone pipeline. Although companies are increasingly using rail to ship conventional oil out of North Dakota, where production is booming, that option is less attractive for the oil sands. Rail cars carrying tar-sands oil cost more to run because they must be heated, and they cannot carry as much, because the oil is much heavier than typical crude. Trains from Alberta must also travel much farther to reach the Gulf coast. The combination of factors increases prices by about US$20 per barrel.

Other proposed pipelines could transport the oil, but they also face challenges. Last week TransCanada, the company behind the Keystone XL plan, said that it wants to build a $12-billion pipeline to the country's Atlantic coast, but environmentalists concerned about oil spills have vowed to block that route. And British Columbia's ruling party took a stance in May against a planned pipeline to Canada's Pacific coast.

“Really what you are left with is that the Keystone pipeline is the only route forward” to increase production from the tar sands, says Susan Casey-Lefkowitz, director of the international programme for the Natural Resources Defense Council in Washington DC. And because increasing production necessarily increases emissions, she says, Keystone “fails the president's climate test”.

But the matter is far from settled. The oil industry has already begun shipping conventional oil out of Alberta by rail, and IHS Cambridge Energy Research Associates, a consulting firm in Englewood, Colorado, projects that tar-sands producers will employ rail if no pipelines are built. “We think it's economic, and we think it will grow in the absence of pipelines,” says Jackie Forrest, senior director for global oil at the firm. Others argue that the industry would push to build other pipelines if Keystone were to fail.

The environmental impact must also be weighed against issues such as safety and energy security, says Andrew Weaver, a climate scientist at the University of Victoria in British Columbia, who was elected this year to the province's parliament as a member of the Green Party. He refuses to weigh in on whether the pipeline should be built, saying that the decision rests with the United States. But he calls the argument for North American energy security “quite compelling”. And he cites the crash last month of an oil-transport train in Quebec, as evidence that the potential for human error is higher with rail than with pipelines.“I think it's mad that we are burning all of our oil,” Weaver says, “but we've got to put it into perspective.”

In 2012, Weaver sought to do just that. He and a student calculated what would happen to global temperatures if the tar sands were fully developed. The proven reserves — those that could be developed with known technologies — make up roughly 11% of the global total for oil, and Weaver's model suggested that full development would boost the average global temperature by just 0.03 degrees Celsius (N. C. Swart and A. J. Weaver Nature Clim. Change 2, 134–136; 2012). Weaver says that the initial focus should be on coal, which he found would have 30 times the climate impact of oil if the world burned all proven coal reserves.

“As a serious strategy for dealing with climate, blocking Keystone is a waste of time,” says David Victor, a climate-policy expert at the University of California, San Diego. “But as a strategy for arousing passion, it is dynamite.”

Well aware that their future prosperity may depend on it, producers as well as the government of Alberta — which hauled in about $4.3 billion in royalties from the oil sands in the 2011–12 fiscal year — say that they are cleaning up operations there. Within Canada much of the concern has focused on local pollution from the mining operations, which spew exhaust and toxic chemicals into the atmosphere and leave behind large wastewater ponds. But companies are also working to trim the overall greenhouse-gas emissions associated with production.

Environment Canada, the country's environment agency, claims that tar-sand producers reduced their emissions by 26% per barrel of oil between 1990 and 2010. But emissions are poised to increase in the coming years as companies probe deeper into the earth. The industry is up against geology. Having depleted many of the tar-sand deposits accessible through surface mining, companies are exploiting deeper formations by injecting steam into the rock layers to liquefy and produce the oil. Producing steam requires natural gas, which can increase emissions by up to 30% compared with the surface-mining process (see 'Dirty oil'). Those deeper deposits now account for roughly half of oil-sands production, but they make up 80% of proven reserves, so their share of production will only climb higher.

Alberta is investing more than $700 million in a $1.35-billion demonstration project that would capture and bury up to 1.2 million tonnes of carbon dioxide annually from a facility that upgrades bitumen, the tar-like product from the oil sands, into crude oil for shipment. On its own, however, that project would not have a significant impact on emissions. More generally, Alberta enacted a law in 2007 requiring all major emitters in the province to reduce their annual emissions intensity — a measure of emissions relative to production — by 12% or face a levy of $14 for every tonne of emissions in excess of that target. That levy has raised $376 million for clean-energy investments to date, nearly $79 million of which has been invested in projects related to the tar sands.

Yet there is no way to cleanly produce oil from the tar sands — or from anywhere else. “The way that you drive down emissions in the transportation sector is by driving less, by becoming more efficient, and then by changing your fuels,” says Michael Levi, an energy-policy fellow at the Council on Foreign Relations in New York.

Many researchers who have sided with environmentalists on Keystone acknowledge that the decision is mostly symbolic. But in the absence of other action, says Harvard's Keith, it is important to get people involved and to send industry a message that the world is moving towards cleaner fuels, not dirtier ones.

For Ken Caldeira, a climate researcher at the Carnegie Institution for Science in Stanford, California, it is a simple question of values. “I don't believe that whether the pipeline is built or not will have any detectable climate effect,” he says. “The Obama administration needs to signal whether we are going to move toward zero-emission energy systems or whether we are going to move forward with last century's energy systems.”