Extreme weather, such as the 2010 Russian heat wave or the drought in the horn of Africa, will become more frequent and severe as the planet warms, the Intergovernmental Panel on Climate Change (IPCC) warns in a report released today. Some areas could become “increasingly marginal as places to live in", the report concludes. 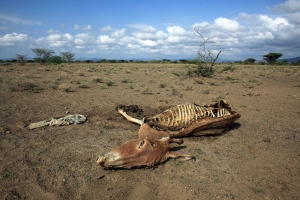 It is “virtually certain” — meaning 99–100% probability in IPCC terminology — that the twenty-first century will see an increase in the frequency and magnitude of warm temperature extremes and a decrease in cold extremes.

It is much less clear, however, how climate change will affect rainfall, flood risk and storminess.

A summary of the report for policymakers was released today at the IPCC plenary meeting in Kampala, Uganda. The full report, compiled over the past two and a half years by more than 100 scientists, draws on the results of thousands of published studies on physical-climate change, risk management and climate-change adaptation, and is scheduled for release early next year.

“We are more confident now than we have been before that climate change will amplify the number of unusually warm days and that it will in many regions also affect precipitation patterns,” says Thomas Stocker, a climate scientist at the University of Bern, Switzerland, and head of the IPCC’s physical sciences group.

But confidence has not increased for other phenomena, including relatively small-scale events such as mudslides and landslides or tropical storms. “There are large research gaps,” he says.

Uncertainty is particularly large as to what will happen in the immediate future. For all the possible levels of greenhouse-gas emissions over the next two or three decades, the projected changes in extremes are relatively small compared with the natural variability of the climate. For some events, such as local floods, it is even unclear whether they will be more or less frequent, says the report.

“It is exceedingly unlikely that climate change will not affect some weather extremes,” says Peter Stott, a climate scientist with the UK Met Office's Hadley Centre in Exeter, who was not involved in writing the report. “But it will take more time and effort to assess in the wider context of climate change how changes in mean temperature and precipitation will alter the likelihood of any extremes to occur.”

Uncertainty arises from both the limitations of even the most sophisticated numerical climate models and from the brevity, and in some regions, unreliability, of the observational record.

The report finds "low confidence" in any observed long-term increases in tropical cyclone activity, for example. It also finds that the rising trend in economic losses from cyclones, including hurricanes, “cannot be reliably attributed to natural or anthropogenic climate change”.

The report is “more candidly addressing uncertainty and more accurately reflecting the peer-reviewed literature”  than previous IPCC assessments have done, says Roger Pielke Jr,a climate-policy researcher at the University of Colorado in Boulder.

“It is satisfying to see that the climate-science community is on the brink of finally getting this topic right,” he says.

But the gap between the release of the summary and the full report is still “unfortunate”, says Stefan Rahmstorf, an ocean and climate researcher at the Potsdam Institute for Climate Impact Research in Germany.

“Governments have in the past considerably weakened the language of IPCC summaries for policymakers,” he says. “As long as the full report is not available it is hard to say if, and to what extent, this may have happened again."

Unlike the full reports, IPCC summaries for policymakers are subject to approval by all governments involved in the IPCC process. Delegates in Kampala say that it was, as usual, a lengthy and cumbersome exercise to go through, and agree on, every sentence of the 29-page summary.

What has been agreed on does provide important guidance for nations and communities vulnerable to climate change, says Rajendra Pachauri, IPCC chairman.  The findings, he says, are especially useful for increasing the resilience of developing countries which tend to generally suffer more severely from extreme weather events than rich countries.

Over the past 30 years, 95% of all fatalities related to storms, floods and other weather-related disasters have occurred in developing countries. The report outlines a variety of adaptation strategies, such as early-warning systems and improved building codes, drainage systems and soil and plant conservation practices, which can help reduce future harm and loss of life.

The report is also meant to inform the United Nation’s upcoming climate talks which start on 28 November in Durban, South Africa.

“Despite all uncertainties, it is crucial for policy-makers to remain aware of the scientific reality of climate change,” says Pachauri. “If science is not given the primacy it deserves it is unlikely that any of the actions will be taken that this report is begging of.”