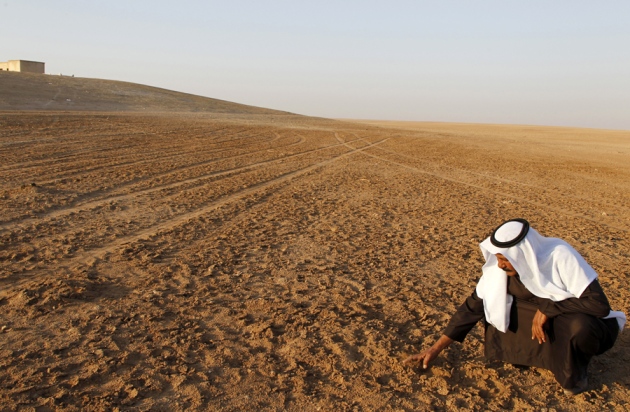 A historic drought that began in 2007 helped to drive roughly 1.5 million Syrians from rural areas to cities.

The drought that ravaged Syria from 2007 to 2010 was the worst in that nation’s recorded history, devastating agriculture in the region. Roughly 1.5 million people fled rural areas for urban outskirts where, in March 2011, social unrest boiled over into civil uprising.

Now, researchers say that global warming helped to cause that drought — and, by extension, helped to exacerbate the conflict, now a full-blown civil war, between armed insurgents and the government of Bashar al-Assad.

The study, published on 2 March in Proceedings of the National Academy of Sciences1, documents a century-long trend of increasing temperatures and decreasing rainfall in the region. Because the observed trend could be reproduced only when climate models took manmade greenhouse-gas emissions into account, the study’s authors conclude that global warming helped to drive the recent drought.

Climate change was not the only factor at play in the conflict, says Colin Kelley, a climatologist at the University of California, Santa Barbara, who led the study. But, he says, “there’s strong evidence for global warming having an impact on this region, and that this most recent drought is due in part to this long-term trend.”

The research adds to a fierce debate over whether climate change influences human conflict. In 2009, a study in the Proceedings of the National Academy of Sciences found evidence that warming contributed to the incidence of armed conflict in Africa2. A 2013 analysis in Science looked at 60 studies and found that climate change was linked to conflict over a broad span of time periods and geography3. But no study has yet described a mechanism by which climate change leads to conflict, a sore point for political scientists who argue that a complex stew of factors drives social unrest.

“I don’t think anyone would claim that climate change is a proximate cause of conflict,” says Francesco Femia, director of the Center for Climate and Security, a think tank in Washington DC. “But it can exacerbate those conditions that can make conflict more likely.” The new research on Syria is worrying, he adds, as climate models predict further drying in the region in coming decades.

The study is the first of its kind to look at a modern, ongoing war. Kelley says that his team focused on the Syrian conflict because it was preceded by a well-documented series of events: the drought caused agriculture to collapse in the country’s northeastern ‘breadbasket’ region, displacing roughly 1.5 million people to urban areas that were already stressed by rapid population growth and an influx of refugees from Iraq.

The situation spawned discontent over mismanagement of ground water and agricultural policies that favoured water-intensive crops such as cotton. Although natural-resource mismanagement may not have been the primary grievance driving the uprising, “there was clearly significant social unrest because of the drought,” says Femia.

Some argue that that these failures of policy — not climate change — had the greatest influence over the drought’s impact. Andrew Solow, an environmental statistician at the Woods Hole Oceanographic Institute in Massachusetts, says that the analysis adds little to the debate over the link between climate and conflict. “In the absence of this drought, would there have been violence? And that’s not a question you can answer,” he says. “We don’t have models like that.”

Femia acknowledges that it is hard to gather even qualitative data to answer that question. Asking people if they joined the insurgency because of the drought would, in principle, provide insight, but their answers are subject to the elusiveness of collective political memory. “The movement gets mythologized and why people join changes,” Femia says. “Memories are going to be hard to extract.”

Solow worries that focusing on the effects of climate change in the hopes of preventing conflict may be a distraction. “You don’t have to cut CO2 emissions by 80% to provide clean water to poor people living in Africa or [implement] better agricultural practices,” he says. “So to me the clearest policy issue is how do we strengthen civil institutions and bring people up in their standard of living so they’re not living on the edge.”