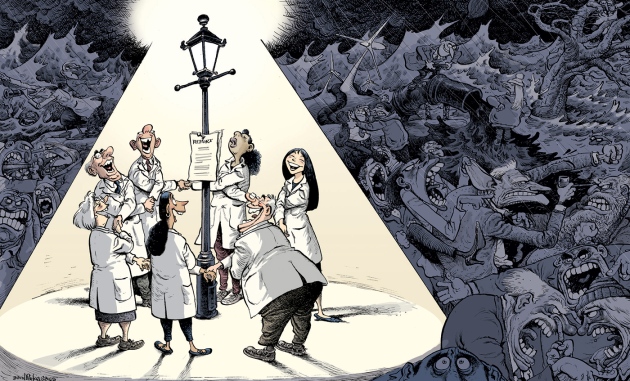 The Intergovernmental Panel on Climate Change (IPCC) is becoming irrelevant to climate policy. By seeking consensus and avoiding controversy, the organization is suffering from the streetlight effect — focusing ever more attention on a well-lit pool of the brightest climate science. But the insights that matter are out in the darkness, far from the places that the natural sciences alone can illuminate.

With the ink barely dry on the IPCC's latest reports, scientists and governments are planning reforms for the next big assessment1, 2. Streamlining the review and writing processes could, indeed, make the IPCC more nimble and relevant. But decisions made at February's IPCC meeting in Nairobi showed that governments have little appetite for change.

David Victor to discusses the factors that are missing from climate research.

The basic report-making process and timing will remain intact. Minor adjustments such as greater coverage of cross-cutting topics and more administration may make the IPCC slower. Similar soul searching, disagreement, indecision and trivial procedural tweaks have followed each of the five IPCC assessments over the past 25 years3.

This time needs to be different. The IPCC must overhaul how it engages with the social sciences in particular (see go.nature.com/vp7zgm). Fields such as sociology, political science and anthropology are central to understanding how people and societies comprehend and respond to environmental changes, and are pivotal in making effective policies to cut emissions and collaborate across the globe.

The IPCC has engaged only a narrow slice of social-sciences disciplines. Just one branch — economics — has had a major voice in the assessment process. In Working Group III, which assesses climate-change mitigation and policy, nearly two-thirds of 35 coordinating lead authors hailed from the field, and from resource economics in particular. The other social sciences were mostly absent. There was one political scientist: me. Among the few bright spots in that report compared with earlier ones is greater coverage of behavioural economics and risk analysis. In Working Group II, which assesses impacts and adaptation, less than one-third of the 64 coordinating lead authors were social scientists, and about half of those were economists.

Bringing the broader social sciences into the IPCC will be difficult, but it is achievable with a strategy that reflects how the fields are organized and which policy-relevant questions these disciplines know well. It will require big reforms in the IPCC, and the panel will have to relinquish part of the assessment process to other organizations that are less prone to paralysis in the face of controversy.

The IPCC walks a wavering line between science, which requires independence, and diplomacy, which demands responsiveness to government preference. Although scientists supply and hone the material for reports, governments have a say in all stages of assessment: they adopt the outline for each chapter, review drafts and approve the final reports.

“Insights such as which policies work (or fail) in practice are skirted.”

Such tight oversight creates incentives for scientists to stick to the agreed scope and strip out controversial topics. These pressures are especially acute in the social sciences because governments want to control statements about social behaviour, which implicate policy. This domain covers questions such as which countries will bear the costs of climate change; schemes for allocating the burden of cutting emissions; the design of international agreements; how voters respond to information about climate policy; and whether countries will go to war over climate-related stress. The social sciences can help to provide answers to these questions, key for effective climate policy. In practice, few of these insights are explored much by the IPCC.

The narrowness of what governments will allow the IPCC to publish is particularly evident in the summary for policy-makers produced at the end of each assessment. Governments approve this document line-by-line with consensus. Disagreements range from those over how to phrase concepts such as a 'global commons' that requires collective action to those about whole graphs, which might present data in ways that some governments find inconvenient.

For example, during the approval of the summary from Working Group III last April, a small group of nations vetoed graphs that showed countries' emissions grouped according to economic growth. Although this format is good science — economic growth is the main driver of emissions — it is politically toxic because it could imply that some countries that are developing rapidly need to do more to control emissions4.

The big problem with the IPCC's output is not the widely levelled charge that it has become too policy prescriptive or is captivated by special interests5. Its main affliction is pabulum — a surfeit of bland statements that have no practical value for policy. Abstract, global numbers from stylized, replicable models get approved because they do not implicate any country or action. Insights such as which policies work (or fail) in practice are skirted. Caveats are buried or mangled.

Readers of the Working Group III summary for policy-makers might learn, for instance, that annual economic growth might decrease by just 0.06 percentage points by 2050 if governments were to adopt policies that cut emissions in line with the widely discussed goal of 2 °C above pre-industrial levels6. They would have to wade through dense tables to realize that only a fraction of the models say that the goal is achievable, and through the main report to learn that the small cost arises only under simplified assumptions that are far from messy reality. 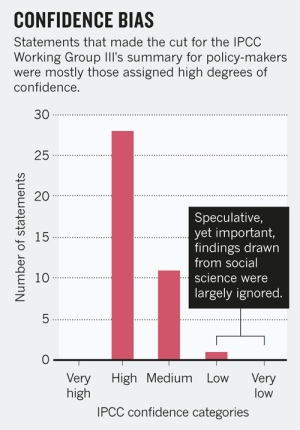 Consider the role of international law. Some social scientists treat law like a contract; others believe that it works mainly through social pressures. The first set would advise policy-makers to word climate deals precisely — to include targets and timetables for emissions cuts — and to apply mechanisms to ensure that countries honour their agreements. The second group would favour bold legal norms with clear focal points — striving for zero net emissions, for example7. Each approach could be useful in the right context.

Multiple competing paradigms make it hard to organize social-science knowledge or to determine which questions and methods are legitimate. Moreover, the incentives within the social sciences discourage focusing on particular substantive topics such as climate change — especially when they require interdisciplinary collaboration. In political science, for example, research on political mobilization, administrative control and international cooperation among other specialities are relevant. Yet no leading political-science department has a tenured professor who works mainly on climate change8.

The paradigm problem need not be paralysing. Social scientists should articulate why different intellectual perspectives and contexts lead to different conclusions. Leading researchers in each area can map out disagreement points and their relevance.

Climate scientists and policy-makers should talk more about how disputes are rooted in different values and assumptions — such as about whether government institutions are capable of directing mitigation. Such disputes help to explain why there are so many disagreements in climate policy, even in areas in which the facts seem clear9.

Unfortunately, the current IPCC report structure discourages that kind of candour about assumptions, values and paradigms. It focuses on known knowns and known unknowns rather than on deeper and wider uncertainties. The bias is revealed in how the organization uses official language to describe findings — half of the statements in the Working Group III summary were given a 'high confidence' rating (see 'Confidence bias').

Building the social sciences into the IPCC and the climate-change debate more generally is feasible over the next assessment cycle, which starts in October and runs to 2022, with efforts on the following three fronts.

First, the IPCC must ask questions that social scientists can answer. If the panel looks to the social-sciences literature on climate change, it will find little. But if it engages the fields on their own terms it will find a wealth of relevant knowledge — for example, about how societies organize, how individuals and groups perceive threats and respond to catastrophic stresses, and how collective action works best. 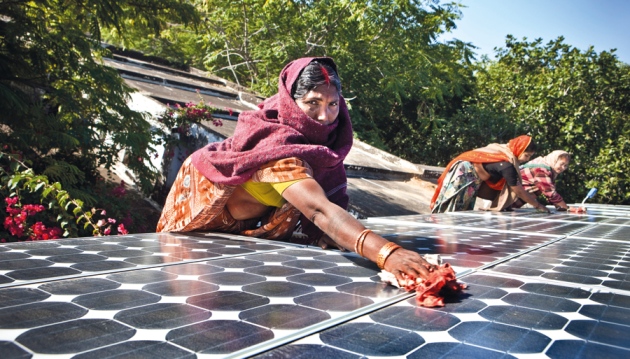 The solar-powered Barefoot College in Rajasthan, India, trains rural villagers in how to install, build and repair solar technologies.

As soon as the new IPCC leadership is chosen later this year, the team should invite major social-sciences societies such as the American Political Science Association, the American and European societies of international law, the American Sociological Association and the Society for Risk Analysis to propose relevant topics that they can assess and questions they can answer. Multidisciplinary scientific organizations in diverse countries — such as the Royal Society in London and the Third World Academy of Sciences — would round out the picture, because social-sciences societies tend to be national and heavily US-based.

These questions should guide how the IPCC scopes its next reports. The agency should also ask such societies to organize what they know about climate by discipline — how sociology examines issues related to the topic, for example — and feed that into the assessment.

Second, the IPCC must become a more attractive place for social-science and humanities scholars who are not usually involved in the climate field and might find IPCC involvement daunting. The IPCC process is dominated by insiders who move from assessment to assessment and are tolerant of the crushing rounds of review and layers of oversight that consume hundreds of hours and require travel to the corners of the globe. Practically nothing else in science service has such a high ratio of input to output. The IPCC must use volunteers' time more efficiently.

Third, all parties must recognize that a consensus process cannot handle controversial topics such as how best to design international agreements or how to govern the use of geoengineering technologies. For these, a parallel process will be needed to address the most controversial policy-relevant questions.

This supporting process should begin with a small list of the most important questions that the IPCC cannot handle on its own. A network of science academies or foundations sympathetic to the UN's mission could organize short reports — drawing from IPCC assessments and other literature — and manage a review process that is truly independent of government meddling. Oversight from prominent social scientists, including those drawn from the IPCC process, could give the effort credibility as well as the right links to the IPCC itself.

The list of topics to cover in this parallel mechanism includes how to group countries in international agreements — beyond the crude kettling adopted in 1992 that split the world into industrialized nations and the rest. The list also includes which kinds of policies have had the biggest impact on emissions, and how different concepts of justice and ethics could guide new international agreements that balance the burdens of mitigation and adaptation. There will also need to be a sober re-assessment of policy goals when it becomes clear that stopping warming at 2 °C is no longer feasible10.

The IPCC has proved to be important — it is the most legitimate body that assesses the climate-related sciences. But it is too narrow and must not monopolize climate assessment. Helping the organization to reform itself while moving contentious work into other forums is long overdue.