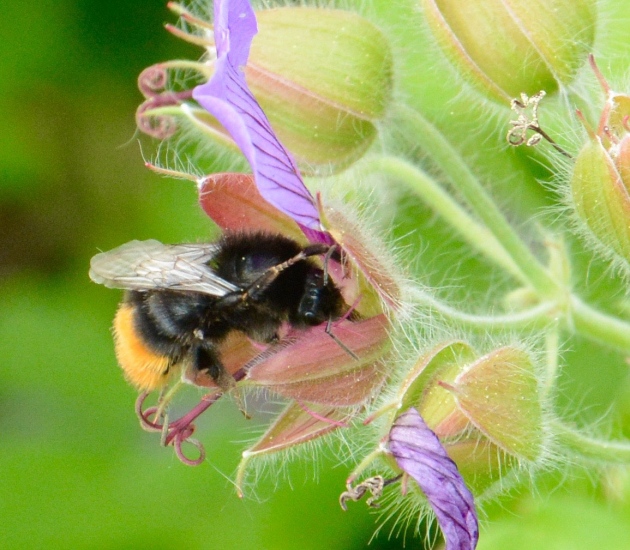 Climate change appears to be a major factor in the decline of some bee populations.

Global warming is serving to “crush bumblebees in a kind of climate vice”, according to the leader of a team that has revealed a dramatic shrinkage in the range of these crucial pollinators.

As temperatures rise, the southern limits of many North American and European bumblebee species’ ranges are moving north — by as much as 300 kilometres in some cases, researchers report today (9 July) in Science1. But the northern edges of the bees’ ranges are staying in place, leading to an overall contraction of the insects’ habitat.

Jeremy Kerr, a biodiversity researcher at the University of Ottawa in Canada, and his colleagues collated more than 400,000 observations of bumblebee species collected in North America and Europe between 1975 and 2010. When the researchers charted the locations of these bee populations over time, they found that many of the 67 species analysed were retreating northward from their southern limits.

This shift has also been observed in other species, such as butterflies. But unlike butterflies, bumblebees have failed to extend the northern boundaries of their ranges, into territory that is now habitable for them due to climate change, the latest study finds.

“Bumblebee species across Europe and North America are declining at continental scales,” says Kerr. “Our data suggest that climate change plays a leading, or perhaps the leading, role in this trend.”

Bees have been under scrutiny in recent years, with populations of honeybees and bumblebees markedly declining in some parts of Europe. Suggested causes include habitat change due to agriculture, diseases, parasites and the use of insecticides, particularly neonicotinoids.

But the work by Kerr’s team found that neither total pesticide use nor neonicotinoid use seemed to be correlated with the observed shifts in the ranges of bumblebee species, and neither was a change in land use.

“Previously, attention on bee declines has focused on habitat loss, pesticide use and the spread of bee parasites,” says Dave Goulson, a bee researcher at the University of Sussex, Brighton, UK. “This study shows that a fourth factor — climate change — is also beginning to take its toll. It is likely that the combined stresses from all of these pressures will have devastating impacts on bumblebees in the not-too-distant future.”

Exactly what can be done to help bumblebees is not clear. Kerr’s team suggests that relocating colonies might be an answer, but Goulson says that because the animals are mobile they are capable of moving northwards if there is suitable habitat available.