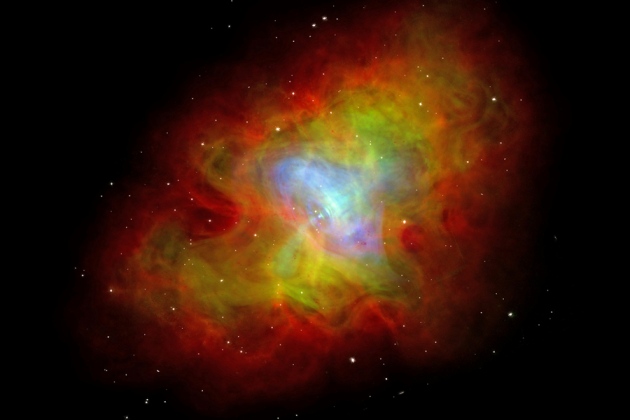 At the centre of the Crab Nebula (pictured) is a pulsar, a type of neutron star, that may emit gravitational waves.

The next discovery of gravitational waves could come from citizen scientists. The Einstein@home project, which uses the idle time on the computers of volunteers who have downloaded a screen saver, is about to start analysing the data from the recently-upgraded Laser Interferometer Gravitational-Wave Observatory (LIGO), a US-led experiment that made history last month with its announcement that it had detected ripples in spacetime.

Since Einstein@home began in 2005, the network has analysed previous data collected by LIGO and its Franco-Italian-led counterpart Virgo near Pisa, Italy, but has so far seen nothing.

On 9 March, the project is due to start analysing data that the upgraded observatory, known as Advanced LIGO, collected between September and January, says Maria Alessandra Papa, a LIGO astrophysicist at the Max Planck Institute for Gravitational Physics in Hannover, Germany. The upgrade vastly increased the volume of sky that LIGO could scan for signals, and led to the discovery of gravitational waves, which was announced on 11 February.

The Einstein@home screen saver automatically downloads and searches chunks of LIGO data, and then sends its results back to the central server, a model inherited from the SETI@home project, which searches radio-astronomy data for messages sent by alien civilizations.

Rather than looking for dramatic sources of gravitational waves, such as the black-hole merger that LIGO detected on 14 September, Einstein@home looks for quieter, slow-burn signals that might be emitted by fast-spinning objects such as some neutron stars. These remnants of supernova explosions are some of the least well understood objects in astrophysics: such searches could help to reveal their nature.

Because they produce a weaker signal than mergers, rotating sources require more computational power to detect. This makes them well-suited to a distributed search. “Einstein@home is used for the deepest searches, the ones that are computationally most demanding,” Papa says. The hope is to extract the weak signals from the background noise by observing for long stretches of time. “The beauty of a continuous signal is that the signal is always there,” she says.

The magnitude of the waves would also allow physicists to determine how hilly or inhomogeneous the neutron star is, which in turn would provide clues about their internal structure. Although neutron stars get their name because their high density means that any protons and electrons present may have been crunched together to form neutrons, astrophysicists don’t know for sure what they are made of, nor how the known laws of physics apply to them. “We call them neutron stars, but we don’t even have overwhelming evidence that they’re made of neutrons. They could be made of more exotic materials,” says Graham Woan, a LIGO astrophysicist at the University of Glasgow, UK.

As it scans its first tranche of data, Einstein@home will look for neutron stars that are emitting waves with frequencies of between 20 hertz and 100 hertz (corresponding to rotation rates of between 10 hertz and 50 hertz), a range where LIGO's sensitivity has improved dramatically following the US$200 million upgrade.

The professionals aren't leaving all the work to citizen-scientists, though. Whereas Einstein@home will look for signals that could be coming from anywhere in the Milky Way, scientists at LIGO and Virgo are planning to target known pulsars. Such targeted searches are computationally less intensive than the Einstein@home scans, so can run on a lab’s computer. But they can also be very powerful. “They are probably the most sensitive observations which LIGO makes,” Woan says.