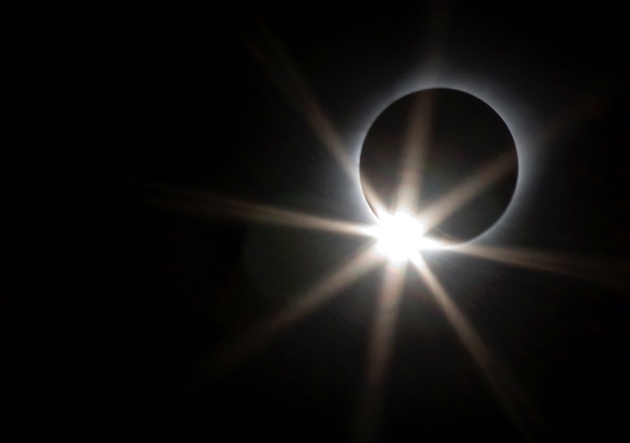 The Sun’s corona becomes visible during an eclipse.

Fred Isberner is a retired healthcare professor in Carbondale, Illinois. But on 21 August, the 69-year-old will be collecting data about the Sun’s superheated outer atmosphere during a total solar eclipse. Isberner is one of thousands of people across the United States who plan to gather data during the event. Their combined efforts will be one of the largest, one-off citizen-science efforts yet.

“It absolutely has the potential to be the biggest,” says Scott McIntosh, director of the National Center for Atmospheric Research’s High Altitude Observatory in Boulder, Colorado.

Total solar eclipses occur about once every 18 months, but they often pass over remote areas such as the ocean. The 21 August eclipse is rare because it will be visible over a heavily populated landmass — the continental United States. About 12 million people live in the path of totality, which stretches from Oregon to South Carolina. Scientists and volunteers plan to take advantage of the situation to gather data and encourage the public to participate in research.

One of the larger efforts is the Eclipse Megamovie Project. The team behind it is inviting anyone with a camera, telescope or smartphone to submit images of the eclipse to an app. Data collected by the project, co-led by McIntosh, will allow researchers to study the ‘diamond ring effect’: a period when sunlight leaks through a valley on the Moon prior to and just after totality, resembling the diamond on a ring. Analysing how this effect changes during the eclipse could help scientists to measure the size of the Sun more precisely.

The project that Isberner is part of — Citizen Continental-America Telescopic Eclipse (Citizen CATE) — involves 68 teams of volunteer stargazers along the path of totality. They will capture images of the eclipse using identical telescopes to get a close, continuous look at the corona, the Sun’s outermost atmosphere. It is a region people normally do not see owing to the Sun's brightness. Researchers hope to spot features including plumes, streamers and loops.

If they are successful, the data could provide insights about this poorly studied region of the Sun, says Matt Penn, a solar astronomer at the National Solar Observatory in Tucson, Arizona, and leader of the Citizen CATE project. Penn’s team will analyse the information and compile the images into a 90-minute timelapse. “No one has taken a 90-minute sequence of this part of the solar atmosphere before”, he says.

Not every citizen-science effort will focus on the heavens, however. A project called Life Responds will ask people to record what animals do during the eclipse. Volunteers can submit their observations on the iNaturalist app.

Life Responds is the brainchild of Elise Ricard, a public programmes supervisor at the California Academy of Sciences in San Francisco, who noticed that birds stopped singing during a 2012 eclipse in Australia. “It wasn’t just us on the beach enjoying the eclipse,” Ricard says. “Animal life was responding.”

There is a lot of anecdotal evidence of odd animal behaviour during an eclipse, but research on it is sparse, says Andrew Fraknoi, a Life Responds adviser and retired astronomy professor at Foothill College in Los Altos Hills, California.

Stories of unusual behaviour during a solar eclipse include chickens returning to their roosts, llamas surrounding a group of people during the event and whales and dolphins surfacing around a boat minutes before totality.

The data collected by Life Responds is not currently destined for a scientific study. But Ricard hopes that the observations will inspire future research on animal behaviour during eclipses.

The sounds of an eclipse

Other projects will keep an ear out on 21 August. The Eclipse Soundscapes project wants people to collect audio of wildlife in urban and rural settings during the eclipse. The information could have potential applications for anthropological or biological studies, says project leader Henry Winter, an astrophysicist at the Harvard-Smithsonian Center for Astrophysics in Cambridge, Massachusetts.

His primary goal, however, is to create an app that pairs sound and vibrations to deliver an eclipse experience to blind people. The idea came to Winter when he noticed that some solar eclipse museum displays only included one label written in braille for the visually impaired.

Like Winter, the scientists leading these projects emphasize the importance of including non-researchers in scientific endeavours. “It gives people the sense that they can contribute to science,” says Fraknoi, who is also helping with Citizen CATE.

This is especially true for students. “It will get kids outside of the classroom and give them the hands-on ability to explore science instead of reading about it in a textbook,” says Janet Jorgensen, a former prinicpal at Harlem Junior High School in Harlem, Montana. She will be in Jay Em, Wyoming, along with two teachers and a student from her former school collecting data for Citizen CATE.

The excitement of doing science is a sentiment Isberner, the first Citizen CATE volunteer, can get behind. “Proves that an old guy like me can be trained without any experience in astroimaging and succeed,” he says.

The story originally placed Henry Winter at Harvard University. He is at the Harvard-Smithsonian Center for Astrophysics. The piece has been corrected to reflect this.