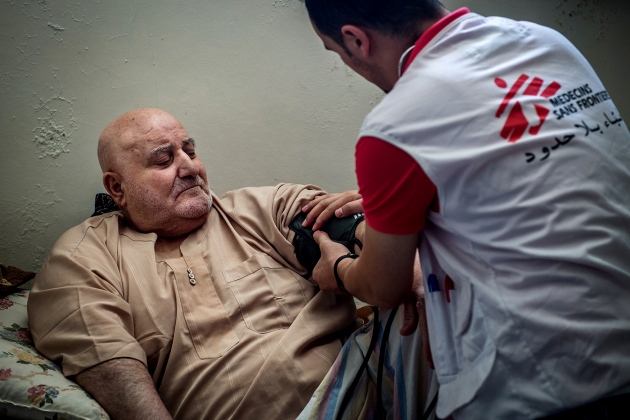 A physician checks on Ibrahim Hassan (left), who lives as a displaced person in Jordan after fleeing the regime in Syria.

Ibrahim Hassan is propped up on pillows on a cement floor when a physician comes to check on him. Hassan fled to Jordan from southern Syria after conflict erupted there in 2011. The 65-year-old can no longer walk as a result of multiple strokes, which his doctor blames on high blood pressure — but Hassan blames on fear. One stroke hit just as Hassan (whose name has been changed to protect him) made it to Syria’s border with Jordan, after 18 hours of dodging bullets, bombs and hostile soldiers.

Hassan’s encounter with tragedy is all too common here. Across the Middle East, deaths resulting from violence grew by 850% between 1990 and 2015, according to a series of reports published on 3 August in the International Journal of Public Health1–15. The increase accelerated after 2010, corresponding with the beginning of the Arab Spring movement and wars in Syria and Iraq. At the same time, the authors found, the incidence of many chronic diseases has also risen dramatically; the death rate from diabetes, for instance, grew 216% over the study period.

Taken together, the analyses describe a disturbing deterioration in health across a broadly defined Middle Eastern region, which includes 22 countries — including Afghanistan, Iraq, Syria, Somalia and the United Arab Emirates — that are home to more than 580 million people.

A fight for health

Sitting cross-legged across from her husband, Hassan’s wife, Zahra, recalls how she watched the Syrian regime burn her son in front of her in 2012. The regime arrested another son, who returned home days later beaten nearly to death. That was when the family decided to flee to Jordan. After Ibrahim had his stroke at the Syria–Jordan border, it took Zahra two weeks to find the Jordanian hospital where he was taken for medical treatment.

Since then, daily pills keep Ibrahim’s blood pressure in check, but Zahra — who also has high blood pressure — says that their days remain dark. Both still struggle with physical and mental health problems. “After they killed my son and took my child, I used to walk down the streets and say, I don’t care anymore,” Zahra says in tears. “I’m really sick now. My body is sick.”

The latest analyses add country-specific details to the Global Burden of Disease study released by the IHME last year, which so far is the most comprehensive investigation worldwide of the causes of death and disease.

To carry out analyses focused on the Middle East, the authors gathered information from the media, government officials and university researchers, among other sources. They used mathematical models to extrapolate in cases in which data were limited. For countries that do not track rates of smoking, for instance, the team estimated smoking prevalence using a model that included data on lung-cancer rates, income and education3.

Cardiovascular disease is the biggest killer in the region, just as it as worldwide, according to one of the papers4. In 2015, cardiovascular-related diseases, such as strokes, were responsible for 34% of all deaths in the Middle Eastern region; that is a slight increase over the 1990 figure of 30%. In addition the large jump in the death rate from diabetes, the rate of deaths from diabetes-related kidney disease rose by 179%.

Among the starkest changes was a 1,027% increase in deaths from events such as war, terrorism and state-sanctioned punishment for crimes5. In 2015 alone, around 144,000 people in the Middle Eastern study region died from this collective violence. Yet during the same period in other parts of the world, deaths from the same cause decreased by 67%.

Homicide and death from physical and sexual assault also increased in the Middle East between 1990 and 2015, but the current overall rate — 5.7 people per 100,000 in 2015 — remains lower than in the Americas or Africa.

Richard Garfield, an epidemiologist at Columbia University in New York City, says that the overall trends highlighted by the latest reports are probably true, but that figures related to disease incidence or death rates in some countries — such as Somalia — might be off because of the paucity of public-health data in the Middle Eastern region studied.

Mokdad’s team relied on modelling to compensate for a lack of hard numbers, and as a result, the margins of error for some estimates are wide. Although the team suggests that diabetes caused the loss of about 510 collective 'healthy years' for every 100,000 men in Syria2, that’s the midpoint of a range that spans from 381 years to 672. In Somalia, the range is even wider: between 328 and 1,303 healthy years lost.

The authors of the studies “have done the most with the data they have, and nothing they’ve done is wrong, but it’s a bit opaque to give precise numbers at the country level”, Garfield says.

To address the rise in chronic disease, Mokdad and his colleagues say, people in the Middle Eastern region require healthier diets, more exercise and better access to health care. But Mokdad says that significant improvements are unlikely in areas where conflict continues. “People are resilient, and I am optimistic that the medical sectors can rebuild themselves, but I am pessimistic because there is no end in sight to the war,” he says. “The best intervention is to stop the violence.”