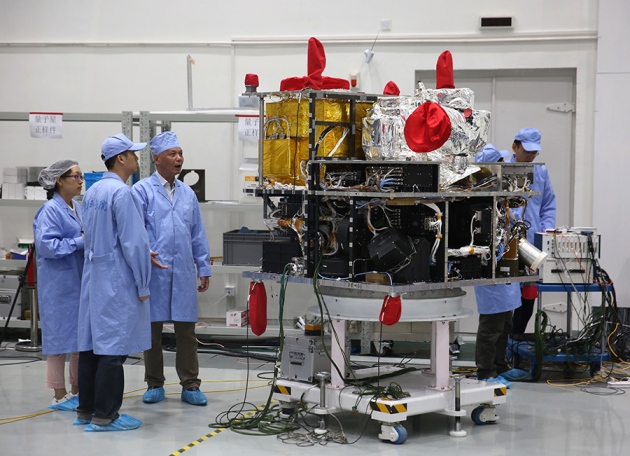 Update: China launched the world’s first quantum satellite on 16 August. The Quantum Experiments at Space Scale (QUESS) satellite, which lifted off from the Jiuquan Satellite Launch Center in northern China at 1:40 a.m. local time, successfully entered orbit at an altitude of 500 kilometres.

China is poised to launch the world’s first satellite designed to do quantum experiments. A fleet of quantum-enabled craft is likely to follow.

First up could be more Chinese satellites, which will together create a super-secure communications network, potentially linking people anywhere in the world. But groups from Canada, Japan, Italy and Singapore also have plans for quantum space experiments.

“Definitely, I think there will be a race,” says Chaoyang Lu, a physicist at the University of Science and Technology of China in Hefei, who works with the team behind the Chinese satellite. The 600-kilogram craft, the latest in a string of Chinese space-science satellites, will launch from Jiuquan Satellite Launch Center in August. The Chinese Academy of Sciences and the Austrian Academy of Sciences are collaborators on the US$100-million mission.

Quantum communications are secure because any tinkering with them is detectable. Two parties can communicate secretly — by sharing a encryption key encoded in the polarization of a string of photons, say — safe in the knowledge that any eavesdropping would leave its mark.

So far, scientists have managed to demonstrate quantum communication up to about 300 kilometres. Photons travelling through optical fibres and the air get scattered or absorbed, and amplifying a signal while preserving a photon’s fragile quantum state is extremely difficult. The Chinese researchers hope that transmitting photons through space, where they travel more smoothly, will allow them to communicate over greater distances.

At the heart of their satellite is a crystal that produces pairs of entangled photons, whose properties remain entwined however far apart they are separated. The craft’s first task will be to fire the partners in these pairs to ground -stations in Beijing and Vienna, and use them to generate a secret key.

During the two-year mission, the team also plans to perform a statistical measurement known as a Bell test to prove that entanglement can exist between particles separated by a distance of 1,200 kilometres. Although quantum theory predicts that entanglement persists at any distance, a Bell test would prove it.

The team will also attempt to ‘teleport’ quantum states, using an entangled pair of photons alongside information transmitted by more conventional means to reconstruct the quantum state of a photon in a new location.

“If the first satellite goes well, China will definitely launch more,” says Lu. About 20 satellites would be required to enable secure communications throughout the world, he adds.

The teams from outside China are taking a different tack. A collaboration between the National University of Singapore (NUS) and the University of Strathclyde, UK, is using cheap 5-kilogram satellites known as cubesats to do quantum experiments. Last year, the team launched a cubesat that created and measured pairs of ‘correlated’ photons in orbit; next year, it hopes to launch a device that produces fully entangled pairs.

A Canadian team proposes to generate pairs of entangled photons on the ground, and then fire some of them to a microsatellite that weighs less than 30 kilograms. This would be cheaper than generating the photons in space, says Brendon Higgins, a physicist at the University of Waterloo, who is part of the Canadian Quantum Encryption and Science Satellite (QEYSSat) team. But delivering the photons to the moving satellite would be a challenge. The team plans to test the system using a photon receiver on an aeroplane first.

An even simpler approach to quantum space science, pioneered by a team at the University of Padua in Italy led by Paolo Villoresi, involves adding reflectors and other simple equipment to regular satellites. Last year, the team showed that photons bounced back to Earth off an existing satellite maintained their quantum states and were received with low enough error rates for quantum cryptography (G. Vallone et al. Phys. Rev. Lett. 115, 040502; 2015). In principle, the researchers say, the method could be used to generate secret keys, albeit at a slower rate than in more-complex set-ups.

Researchers have also proposed a quantum experiment aboard the International Space Station (ISS) that would simultaneously entangle the states of two separate properties of a photon — a technique known as hyperentanglement — to make teleportation more reliable and efficient.

As well as making communications much more secure, these satellite systems would mark a major step towards a ‘quantum internet’ made up of quantum computers around the world, or a quantum computing cloud, says Paul Kwiat, a physicist at the University of Illinois at Urbana–Champaign who is working with NASA on the ISS project.

The quantum internet is likely to involve a combination of satellite- and ground-based links, says Anton Zeilinger, a physicist at the Austrian Academy of Sciences in Vienna, who argued unsuccessfully for a European quantum satellite before joining forces with the Chinese team. And some challenges remain. Physicists will, for instance, need to find ways for satellites to communicate with each other directly; to perfect the art of entangling photons that come from different sources; and to boost the rate of data transmission using single photons from megabits to gigabits per second.

If the Chinese team is successful, other groups should find it easier to get funding for quantum satellites, says Zeilinger. The United States has a relatively low profile when it comes to this particular space race, but Zeilinger suggests that it could be doing more work on the topic that is classified.

Eventually, quantum teleportation in space could even allow researchers to combine photons from satellites to make a distributed telescope with an effective aperture the size of Earth — and enormous resolution. “You could not just see planets,” says Kwiat, “but in principle read licence plates on Jupiter’s moons.”

This article was updated after the launch of China's quantum satellite.