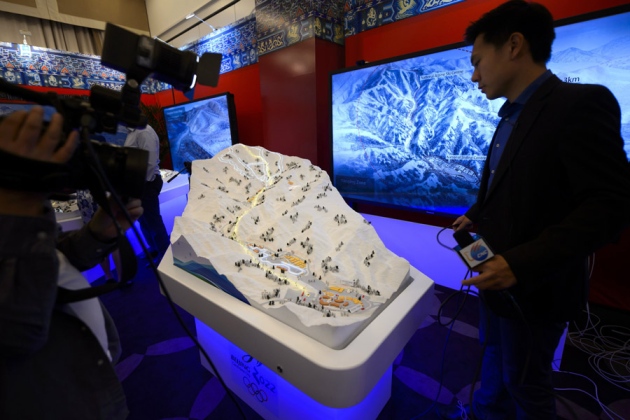 A model of the alpine ski centre displayed during Beijing's bid to host the 2022 Winter Olympic Games.

Celebrations of Beijing’s successful bid to host the 2022 Winter Olympic Games have been tempered by online protests from young biologists over the proposed alpine ski site. They say it falls within a protected nature reserve that contains many rare species, including Beijing’s only Shanxi orchids (Cypripedium shanxiense). More importantly, say other biologists, the proposed site would violate environmental protection laws touted by the government and create a precedent that would hamper already fraught efforts to conserve other, more significant sites.

Local officials have since said they will redraw the lines that delineate the national reserve — but this has left the protesters unsatisfied. Meanwhile their online posts, to the Chinese social media website Weibo, are no longer visible; the protesters say they have been blocked.

After the International Olympic Committee, based in Lausanne, Switzerland, announced on 31 July that Beijing would host the Winter Olympics, nature enthusiasts quickly noted that the proposed alpine ski routes fall within the core area of the 4,600-hectare Songshan National Nature Reserve. On 1 August, Wang Xi, who recently received his PhD and works at the Chinese Academy of Sciences in Shanghai, overlaid maps from the International Olympic Committee’s evaluation report with those from the reserve’s website and posted the result on his Weibo account: both the start and end of the alpine runs fall within the reserve, he found. 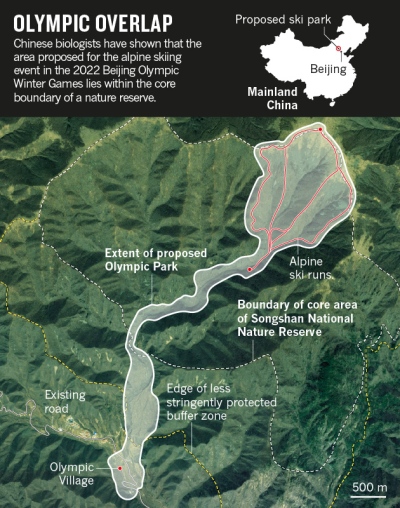 Xi told Nature’s news team that his main motivation was to spread news of the possible ecological impact on plants there, including three orchid species that are classified at the highest protection level under Beijing's conservation system. “It’s a chance for the government to connect with the people and talk to each other to solve this problem,” he says. “I am not against the Olympic Games, but they should be carried out in an environmentally friendly way.”

His post was clicked some 240,000 times and forwarded more than 1,000 times, but within two days he found that it no longer appeared online. Word spread anyway. Yun Ji, a 28-year-old entomologist in Beijing who did not want his affiliation mentioned, had copied Xi’s maps. He added information on and pictures of the various plants found in the reserve that are on a list of the rarest and most rigorously protected of Beijing's plants, along with photos of birds whose habitat, he says, could also be destroyed. His Weibo post was no longer accessible from the site — within four hours, he says — but while it was still online, it was forwarded 3,000 times, and from one of those reposts, was forwarded an additional 16,000 times.

Neither the Chinese Olympic Committee nor the Beijing government has released official statements responding to the allegations in the posts; in its evaluation report, the Beijing 2022 Olympic Winter Games Bid Committee said the ski area was “adjacent to” the reserve. But on 7 August, the deputy mayor of Yanqing, the county in Beijing that has jurisdiction over the Songshan National Nature Reserve, announced that the borders of the reserve would be “adjusted” to take in land to the north-east of the current boundaries, and that some of the original reserve will be taken “to provide the necessary space for local sustainable development and to promote interaction between ecological protection and economic society”.

The mayor’s office deferred queries from Nature’s news team to the bid committee but the team did not receive a response from that committee nor from the China Olympic Committee. The International Olympic Committee has also not replied to queries from Nature’s news team on how it handles applications that have inconsistencies, and whether conflict with a nature reserve would have affected its decision. Beijing won its bid by a 44 to 40 majority over Almaty in Kazakhastan.

According to 2013 government regulations, those who wish to change nature-reserve boundaries must submit an application that includes a public comment, an ecological assessment and four other documents. Xi and Ji say that they can find no evidence that this happened.

Lei Gu, a postdoctoral researcher in evolution and conservation biology at Peking University, says that Songshan is not that important in terms of biodiversity. The bigger problem, he says, is that a government that has been increasingly issuing statements and regulations that emphasize its commitment to environmental sustainability and conservation seems to be backing away from its promises. In May, for example, China's environment ministry released a notice, signed by ten government agencies, that stated that any development at odds with a reserve’s function is “strictly forbidden”.

That is a promise “to crack down on illegal acts in nature reserves”, says Gu, whose Weibo posts on the subject are no longer accessible. “But it isn’t working here. Gu and Xi both worry that seeing the strict policies fail in Beijing would send a broader signal to local governments. If Beijing violates Songshan’s reserve, “it will be easier for local governments to give construction projects higher priority than conservation issues”, says Gu. “The real impact is the breaking of Chinese laws and policies on nature reserves.”

Xi says that a better site for the alpine ski event would be Zhangjiakou, a city in neighbouring Hebei province, which will also host some winter Olympic events. Zhangjiakou has mountains that are already developed and would suffer no environmental loss.