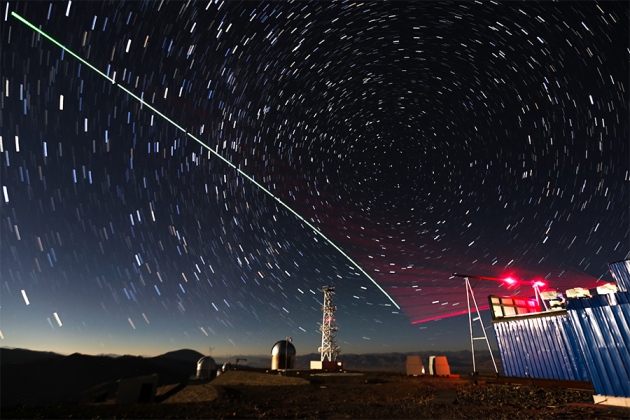 A composite photo from December 2016 shows a link established between China's quantum satellite Micius and a ground station in the Tibet Autonomous Region.

Just months into its mission, the world’s first quantum-communications satellite has achieved one of its most ambitious goals.

Researchers report in Science1 that, by beaming photons between the satellite and two distant ground stations, they have shown that particles can remain in a linked quantum state at a record-breaking distance of more than 1,200 kilometres. That phenomenon, known as quantum entanglement, could be used as the basis of a future secure quantum-communications network.

Chinese satellite is one giant step for the quantum internet

The feat is the first result reported from China’s Quantum Experiments at Space Scale (QUESS) mission, also known as Micius after an ancient Chinese philosopher. Launched last August, the craft is designed to demonstrate principles underlying quantum communication. The team is likely to launch more quantum-enabled satellites to start building a network.

Quantum communication is secure because any interference is detectable. Two parties can exchange secret messages by sharing an encryption key encoded in the properties of entangled particles; any eavesdropper would affect the entanglement and so be detected.

The Micius team has already done experiments exploring whether it is possible to create such encryption keys using entangled photons, and even 'teleport' information securely between Earth and space, says Pan Jian-Wei, a physicist at the University of Science and Technology of China in Hefei and the main architect of the probe. But he says that his team is not yet ready to announce the results.

In theory, entangled particles should remain linked at any separation. That can be checked using a classic experiment called a Bell test.

Central to QUESS's experiments is a laser beam mounted on the satellite. For the Bell test, the beam was split to generate pairs of photons that share a common quantum state, in this case related to polarization. The entangled photons were funnelled into two onboard telescopes that fired them at separate stations on the ground: one in Delingha, on the northern Tibetan Plateau, and the other 1,203 kilometres south, at Gaomeigu Observatory in Lijiang. Once the particles arrived, the team used the Bell test to confirm that they were still entangled.

The researchers had a window of less than 5 minutes each night when the satellite, which orbits at an altitude of about 500 kilometres, was in view of both observatories. Within weeks of launch, they were able to transmit a pair of entangled photons per second — a rate ten times faster than they had hoped. The crucial experiment was completed before the end of the year, says Pan: “We are very happy that the whole system worked properly.” The previous record for such an experiment was 144 kilometres2.

“I am really impressed by the result of the Chinese group,” says Wolfgang Tittel, a physicist at the University of Calgary in Canada. “To me, it was not clear after the satellite launch if they would succeed,” he says, or whether they would use it to learn for the next improved mission.

Pan says that in addition to the quantum-key and teleportation experiments, the team also plans to use Micius to test how gravity affects the quantum state of photons. And they want to launch a second, improved, quantum satellite in two years. A major challenge, he says, will be to upgrade the technology so that it can send and receive signals during the day, when there are many more photons around and it is harder to pick out the ones coming from the satellite.

For now, Pan feels vindicated about the first spacecraft’s design. Colleagues thought that it was too ambitious, he says, because it produced the entangled photons in space and required two photon-firing systems.

Similar missions in the planning stages — such as Canada’s Quantum Encryption and Science Satellite (QEYSSat) — use a simpler approach, creating the entangled photons on Earth and beaming them to a satellite. In a study3 published last week, the QEYSSat team reported a successful test of its technology, transmitting photons from the ground to an aircraft as much as 10 kilometres in the air.

Thomas Jennewein, who is at the University of Waterloo in Canada and part of the Canadian mission, says that his group and others around the world are now racing to catch up with the Chinese effort. “They are now clearly the world leader in quantum satellites,” he says.