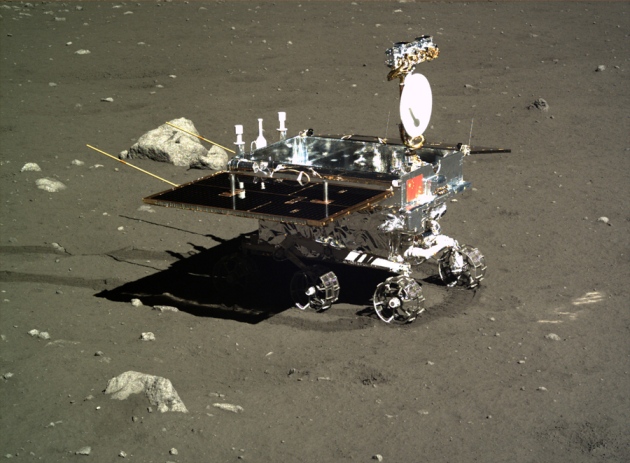 China’s Moon rover Yutu, or ‘Jade Rabbit’, has stopped hopping. But its ears are still twitching — and communicating with Earth.

Last week Yutu and its companion spacecraft, the Chang’e 3 Moon lander, awoke from a period of dormancy after the frigid, two-week lunar night — the third awakening since landing on 14 December, Chinese scientists said this week at the Lunar and Planetary Science Conference in The Woodlands, Texas. The probes continue to gather data and send it back to Earth.

But Yutu may never move more than the 100–110 metres it has already travelled from its landing site — in the Mare Imbrium. Mission officials had hoped that Yutu would travel to the rim of a nearby crater and explore it, but a mechanical failure in Yutu’s drive system has stilled the rover since late January.

The rover has already used its ground-penetrating radar to probe the structure of the lunar soil more than 100 metres deep. Those data are still being processed, but Le Qiao, a planetary scientist at the China University of Geosciences in Wuhan, is anxious to see whether the results confirm the thickness of basaltic rocks at the landing site. Using satellite images of craters that expose the underlying layer, Qiao’s team estimates that the basaltic rocks are 41–46 metres thick at the landing site.

Early results from the rover’s alpha-particle X-ray spectrometer also hint at the chemical composition of the landing site. A presentation led by scientists at the Institute of High Energy Physics in Beijing showed that the instrument analysed the chemical makeup of lunar soil at two locations. It spotted expected major chemical elements such as magnesium, aluminium, silicon, potassium and calcium.

Much of the purpose of having a rover is lost, though, if Yutu can no longer gather data from different areas.

Scientists were hoping to see more of the Chinese lunar data at the conference, says Alexander Basilevsky, a lunar geologist at the Vernadsky Institute of Geochemistry and Analytical Chemistry in Moscow. “They should have something by now,” he says. Basilevsky is comparing the geology of Yutu’s landing site to a site about 500 kilometres away, where the Soviet Lunokhod-1 rover travelled in 1970. Comparing the two could show how widespread different rock types are in the region, he says.

Even if Yutu never moves again, it and the Chang’e 3 lander will keep taking data. And Chinese officials have already talked about Chang’e 4, a mission similar to Chang’e 3 that will launch to a different part of the Moon next year.