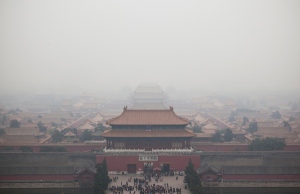 When Dabo Guan was studying the sources of carbon dioxide that were driving China to become the world’s top emitter of global-warming gases, he came across a puzzling mismatch: adding up the emissions estimates from China’s 30 provinces and municipalities gave a figure much higher than those reported for the nation as a whole1.

This week in Nature Climate Change, Guan, an expert in sustainability science at the University of Leeds, UK, and his colleagues compare provincial aggregates with national data2. They find that in 2010, the gap between the two was a whopping 1.4 gigatonnes ― equivalent to 5% of the world’s emissions, and all of Japan’s. A gap has existed since the late-1990s, but it has widened dramatically over the past 5 years.

The report is part of spate of bad news for China’s environmental progress. Last week the country’s Ministry of Environmental Protection and the National Development and Reform Commission released data showing that, in 2011, China emitted 24 million tonnes of nitrogen oxide ― a 5.7% increase over the previous year. The country had planned a 1.5% reduction. China’s official press says that the failure to clean up as much as hoped applies to water and soil as well.

The failure to meet the targets has led to soul searching at the National Development and Reform Commission. Zhang Ping, chairman of the commission, admits that the nation has fallen short in its efforts to “transform [China’s] economic development model” to one based less on heavy industry.

Despite these hints of transparency in reporting environmental problems, China wants to stay firmly in control of monitoring its pollution. China's deputy environment minister last week demanded that foreign embassies stop their independent recording of the nation's air-pollution levels, calling the readings “illegal”. The US embassy, for instance, releases its readings online.

But carbon seems to be the touchiest subject internationally. China does not publish official figures for carbon dioxide emissions, and estimating them has been a headache for researchers. The uncertainties have been as large as 20%3. Guan’s study is the first close, systematic look that is based on official energy figures.

Most of the gap comes from differences in reported energy loss during coal washing and in reported consumption by manufacturing. Guan says that it probably arises because regional data compilers are under pressure from two forces: local officials, whose performance evaluation depends on economic growth so use high estimates of energy use that inflate gross domestic product figures, and central government officials who want lower figures that look more environmentally friendly on the international stage. “Both have flaws,” says Guan.

Zhu Liu, a co-author of the report, from the Institute of Applied Ecology of the Chinese Academy of Sciences in Shenyang, points out that they have no idea which of the two figures is more accurate. “We just have these possible explanations," he says. “China’s real carbon emissions could be higher than our provincial aggregate estimate, or even lower than our national estimate. It’s a huge uncertainty.”

Guan says that the widening gap could be partially explained by rapid economic development, especially in western provinces, which has led to high demand for cement, processed metals, and other energy-intensive products. Small firms that lack any kind of bookkeeping experience or statistical expertise are popping up to meet that demand. “Getting accurate statistics there is challenging,” he says.

China is stepping up its efforts to combat climate change. This week, it launched the National Climate Change Strategy Research and International Cooperation Center to advise the country on ways to decrease emissions and to devise a carbon trading system that will be tested in seven provinces and cities next year.

But Guan says that such efforts must be based on solid baseline figures. He and his colleagues are now trying to refine estimates of coal-based emissions, which account for 70% of the gap. For example, they are re-calculating energy-to-emission conversion factors to take into account the quality of coal used in different regions. They are also looking at emissions data from other sources, such as the China Coal Information Institute & National Institute for Occupational Safety in Beijing, and the Carbon Dioxide Information and Analysis Center at the Oak Ridge National Laboratory in Oak Ridge, Tennessee.

Liu says that the problem is probably global, and especially evident in large developing countries. “The uncertainty of their emission estimates is a great challenge for global greenhouse-gas mitigation. Such a challenge hasn’t been widely recognized.”