China formally submitted its climate pledge to the United Nations on 30 June, committing to boost renewable-energy supplies and to level off its emissions around 2030.

Expanding on a November 2014 agreement between the China and the United States, China said that it would reduce the amount of carbon dioxide that it emits per unit of gross domestic product (carbon intensity) to 60–65% below 2005 levels. The country also pledged to produce 20% of its energy through non-fossil-fuel resources and to expand its forests, in an attempt to capture more carbon dioxide from the atmosphere.

An analysis by GWG Energy, a consultancy in London, suggests that China may be able to level off its emissions well before 2030 if it meets its new carbon-intensity target, depending on how fast the economy grows. 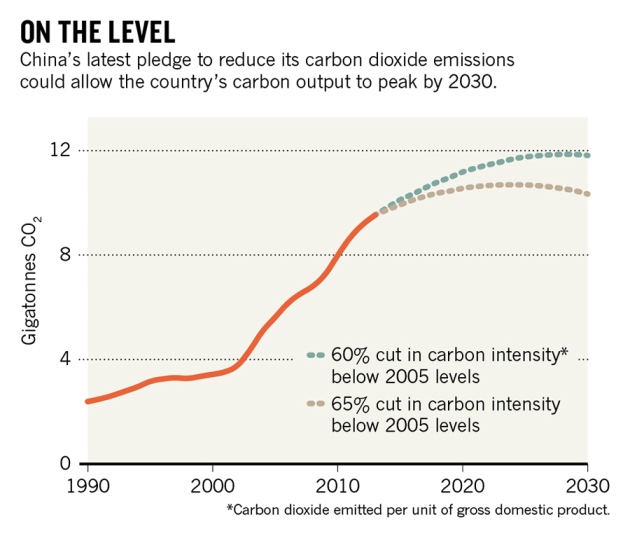 “I can see emissions peaking before 2030, but cutting emissions relatively quickly after 2030 is going to be a problem,” says GWG Energy director Gerard Wynn. Emissions have soared alongside a rapid expansion of coal-fired power over the past decade, says Wynn, and reducing emissions in the future would mean closing down coal plants prematurely.

Environmentalists were hoping that China would commit to reducing its carbon intensity even more, but nonetheless said that the commitment represents a step forward.

“It’s still a little conservative, but still pretty good,” says Barbara Finnemore, who heads the Asia programme for the Natural Resources Defense Council, which is based in New York City. “We think they can and will go beyond what they pledged today.”