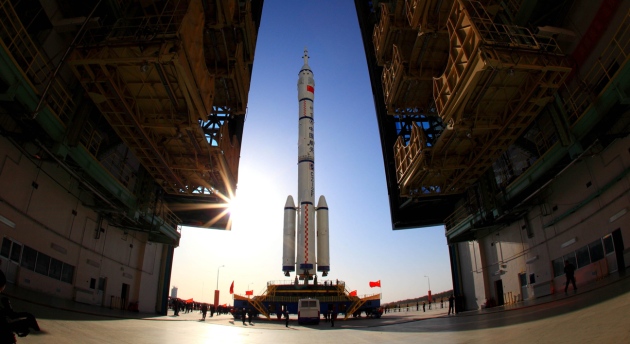 The Shenzhou-8 spacecraft (pictured before launch) has docked successfully with the Tiangong-1 module.

The likely demise of Russia’s Phobos-Grunt mission has dashed China’s hopes for its first Mars orbiter, Yinghuo-1, which was piggybacking on the larger craft (see ‘Russia gets the red planet blues’). But it is a relatively small setback for a nation that has notched up a string of high-profile space successes in recent years, including this month’s ‘heavenly kiss’ of two unmanned orbiters, Shenzhou-8 and Tiangong-1 — a milestone in the country’s effort to build a manned space station, the Tiangong (‘Heavenly Palace’), by the end of the decade.

And ambitious moves on the ground suggest that China will increasingly be able to develop and launch its probes without partnering with other nations. In July, the Chinese Academy of Sciences (CAS) in Beijing opened its National Space Science Center (NSSC), which will take charge of overall planning for the country’s space science. “China was a space country without a space science programme,” says Ji Wu, the centre’s director. Now that the CAS “has got government support to manage space science missions as a series”, he says, “it will lead to a new era for space science in China”.

For years, the lack of a clear national strategic plan that prioritized missions has hampered researchers’ efforts to launch space telescopes or planetary probes. The convoluted relationships between the various Chinese agencies involved in funding, building and launching satellites impeded many mission proposals, and decisions about their fate were at best “opaque”, according to one European researcher who has collaborated with Chinese space scientists.

Centralized planning under the NSSC could change that. The centre already has about 450 staff, including 50 scientists, inherited from its predecessor, the Center for Space Science and Applied Research, which last year had a budget of 300 million renminbi (US$47 million). (Individual missions have separate funding.) That will grow to 700 million renminbi as the centre develops space science missions over the next few years.

First in the queue is an orbiting X-ray observatory, HXMT, with a budget of about 900 million renminbi and due for launch in 2014. Then there is the KuaFu mission, which aims to reach space the following year, to study the Sun’s effects on space weather. Later missions could fly on China’s Long March 5 rocket, expected to enter service in 2014. Its ability to loft payloads of 14 tonnes into a highly elliptical orbit should allow China to launch interplanetary missions as large as Phobos-Grunt.

The NSSC’s mission selection and planning pro­cedure is “more or less the way we prepare missions at ESA”, says Philippe Escoubet, a mission manager at the European Space Agency’s (ESA’s) Science and Robotic Exploration Directorate in Noordwijk, the Netherlands. “It’s very much welcome.”

Escoubet collaborated with Chinese scientists on the Double Star mission, a joint effort with ESA that launched two satellites, in 2003 and 2004, to study Earth’s magnetosphere. He believes that, as China devotes more resources to space science, there will be greater opportunities for collaboration.

“In twenty years, China will be dominating the United States.”

CAS president Bai Chunli, in his speech at the NSSC inauguration, confirmed that the centre will endeavour to “deepen inter­national cooperation”, adding that “scientists from around the world will be able to access data” from the missions.

But Wu must win the confidence of potential collaborators who have been frustrated in the past by bureaucracy and delays when they tried to work with China. Indeed, several scientists interviewed by Nature for this article were unwilling to speak on the record, fearing that future partnerships with China could be jeopardized.

Some worry that the new missions, like China’s space station, may be exclusively national projects. “In principle, it is relatively advantageous to European researchers to be involved in Chinese missions,” says one UK space scientist. “However, there has not yet been a Chinese mission with an instrument selection process that was open to the wider world, as opposed to ‘by invitation’.”

Collaboration with scientists in the United States is certainly unlikely. That country has always vetoed Chinese participation in the International Space Station, and congressional antipathy towards China was ramped up earlier this year. In April, congressman Frank Wolf (Republican, Virginia), who chairs the subcommittee that funds NASA, modified a spending bill to prevent the agency from using federal funds on joint projects with China. But if China’s planned space science missions go ahead “and the United States is locked out, it will be a huge missed opportunity”, says a US-based astrophysicist familiar with Chinese science.

“China is firmly committed to upping its profile in space science, both to expand its technological base and to boost its domestic and international prestige,” says space security expert Clay Moltz of the Naval Postgraduate School in Monterey, California. “As long as China’s economy continues to deliver strong growth, I expect space science missions will continue to expand.”

A European scientist who has worked with China’s space scientists agrees that its space science will flourish, particularly as Chinese senior scientists return from research positions in the West. “In twenty years, China will be dominating the United States,” he says. “There is a sense of national urgency and dedication in China, and the rate at which they learn is phenom­enal. It won’t take that long.”