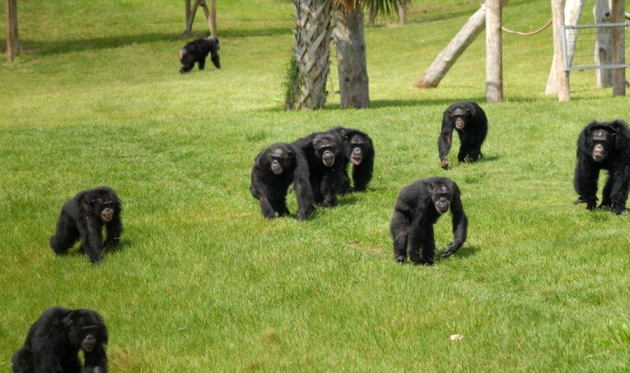 An animal rights group wants two chimpanzees in a New York laboratory moved to a sanctuary in Florida.

A campaign by animal rights activists to establish the legal personhood of chimpanzees took a bizarre turn this week, when a New York judge inadvertently opened a constitutional can of worms only to clamp it shut a day later. On 20 April, New York Supreme Court Justice Barbara Jaffe signed an order forcing Stony Brook University to respond to claims by the Nonhuman Rights Project (NhRP) that two research chimpanzees, Hercules and Leo, were being unlawfully detained. The Coral Springs, Florida, organization declared victory, claiming that because such an order, termed a writ of habeas corpus, can only be granted to a person in New York state, the judge had implicitly determined that the chimps were legal persons.

An eruption of news coverage on 21 April sparked a backlash by legal experts claiming the significance of the order had been overblown. By that evening, Jaffe had amended the order, letting arguments on the chimps’ detainment go forward but explicitly scratching out the words WRIT OF HABEAS CORPUS at the top of the document. Nature takes a look at the episode’s significance in the campaign to give animals legal rights and what it means for the research community.

What is the basis for the idea of giving chimps personhood rights, rather than improving animal treatment laws?

The NhRP stands apart from typical animal welfare and animal rights groups in that it narrowly focuses on getting the most intelligent, autonomous, self-aware animals recognized under the law as “persons” with specific rights, rather than things. “We are only asking for one legal right and that’s bodily liberty,” says the organization’s executive director, Natalie Prosin. Animal welfare laws in New York already allow people and organizations to obtain relief from the courts when animals are being abused or kept in poor conditions. The organization’s petition to the court, filed with affidavits from animal cognition researchers, states that keeping chimps in captivity is unlawful, independent of the conditions in which they are kept and whether animal welfare laws are being violated.

Would a writ of habeas corpus mean that the chimps were persons, legally speaking?

Under New York state law, a writ of habeas corpus can be issued only for legal “persons”. However, issuing the writ is a two-step process, and the NhRP has noted in previous filings that the courts do not have to make a determination about personhood before giving the opponents a chance to respond. The order issued on 20 April was only the first step, and the judge likely sought to make that clear with her modifications. The burden of proof is now on the New York attorney general, who represents Stony Brook, to provide a legal reason for keeping the chimpanzees detained.

If the NhRP wins the case, what will happen to the chimps?

The organization would like the two chimps, who are used in biomechanics research in the anatomy department, to be released to the Save the Chimps sanctuary in Fort Pierce, Florida, where they would live with other chimps on an island of roughly 0.8–1.2 hectares in an artificial lake. Even though the chimpanzees would technically remain in captivity, the NhRP argues that under New York law, relief from unlawful imprisonment can be obtained by moving the animals to a place where they can satisfy their “social, emotional, and physical needs” and “exercise their autonomy and self-determination to the greatest degree possible in North America”.

However, in a separate case filed by the NhRP, a higher court judge has said that habeas corpus can be used only to free a person unlawfully detained, not to change the conditions of the detainment. The organization has sought permission to appeal that decision.

Would this set a precedent for the United States?

Because it is being heard in a New York court, a positive ruling on the NhRP habeas corpus filing would apply only in that state. It also would not set a binding legal precedent, because decisions made by the New York Supreme Court would likely be appealed to the New York Court of Appeals, the state's highest judicial body. However, such a decision would be influential because it would represent the first time in any state that a non-human animal had been granted rights previously reserved for Homo sapiens. In December, a court in New York ruled against the NhRP in the case of Tommy, a former performing chimpanzee. The court determined that he was a not a “person” because he was unable to bear duties and had no responsibilities. The NhRP has asked for permission to argue that case before the Court of Appeals.

Could the group’s arguments apply to other animals?

The NhRP’s current efforts focus on litigating three court cases related to four captive chimpanzees, but they argue that scientific evidence suggests that bodily rights should extend to all great apes; marine mammals, including orcas and dolphins; and elephants. They are preparing to file suit to get a writ of habeas corpus on behalf of captive elephants, such as those used in circus performances.

How will these lawsuits affect researchers?

In the near future, these lawsuits will have little impact on chimpanzee researchers beyond the ones at Stony Brook who work with Leo and Hercules. There are no other research chimpanzees in New York state, and even if this particular case reaches the US Supreme Court, separate lawsuits would have to be filed to obtain legal personhood for other animal species used in research. Nevertheless, David Cassuto, a specialist in animal law at Pace University in New York City, says that the case is part of an “evolving societal mindset that the research community needs to participate in.”

The attorney general will respond to the filing, and a hearing on Hercules and Leo is scheduled for 27 May.