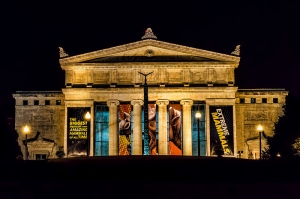 After years of financial woes, the Field Museum of Natural History in Chicago, Illinois, is slashing US$3 million from its annual budget for science operations, which include a $10-million programme for research on the institution’s collection of some 25 million specimens of fossils, plants and animals. Museum president Richard Lariviere unveiled the cuts to museum staff on 18 December as part of a plan to reduce the museum’s total budget by $5 million next year.

For some in the scientific community, the changes signal the end of an era. “It’s one of the great research institutions in comparative zoology, biodiversity and natural history, and it has been one of the leading centres of research for more than 100 years,” says James Hanken, director of the Museum of Comparative Zoology at Harvard University in Cambridge, Massachusetts. “There’s no way the Field Museum will be able to maintain its position of prominence under those circumstances.”

Endowments for museums and universities across the country have been hit hard by the economic recession, but the Field Museum has been pushed to its financial limits in part by recent expansion projects, including the $65-million Collections Resource Center, a storage and laboratory facility that opened in 2005.

“We took on a lot of debt, more than we could sustain, to do some really exciting things, but now we’re paying for it,” says Mark Westneat, a Field Museum curator and chair of zoology.

Despite weathering hiring freezes and repeated budget cuts in the past few years, Field Museum scientists are reeling from the latest announcement, which they feel may cut into crucial scientific capabilities.

“We’ve already cut all the fat off the bone,” says Westneat.

The budget cuts will be accompanied by the dissolution, on 1 January, of the 120-year-old institution’s classical academic departments — zoology, botany, geology and anthropology — and by the shuffling of member scientists into a new, leaner organization, broadly titled Science and Education.

No plans have been released about how the cuts will be applied. “There will be staff input on all the recommendations,” says Debra Moskovits, who will head the new organization.

But most scientists believe layoffs and incentivized retirements are likely to have a big role. “Morale is extremely low,” says Peter Makovicky, curator and chair of geology at the Field Museum. “I would imagine that there will be a lot of résumé polishing in the near future.”

At present, the museum employs 168 science staff, 27 of whom are curators — scientists who collect specimens from around the world and maintain research labs to study the museum’s collection. Much like academic professors, some curators are tenured, but others are not.

At the president’s request, Makovicky and other members of a special museum committee have met to decide whether the institution needs to declare ‘financial exigency' — an emergency status that would allow for layoffs of tenured scientists at the world-class institution.

“To have that put on the table is frightening,” says Corrie Moreau, assistant curator of zoology and one of four 'pre-tenure' curators at the museum.

Museum cutbacks are also likely to affect researchers at other universities. At any given time, around 50–60 graduate students from the University of Chicago and other area universities perform dissertation research in the labs of museum curators.

“The Field Museum has some of the world’s authorities on certain insects and certain kinds of fossils,” says Hanken. “If those people no longer have a job, we in the scientific community have lost their expertise.”

The original of this article incorrectly stated that a special museum committee had begun the process of declaring 'financial exigency.' In fact, the committee is studying whether financial exigency is warranted. The text has been changed to reflect this.