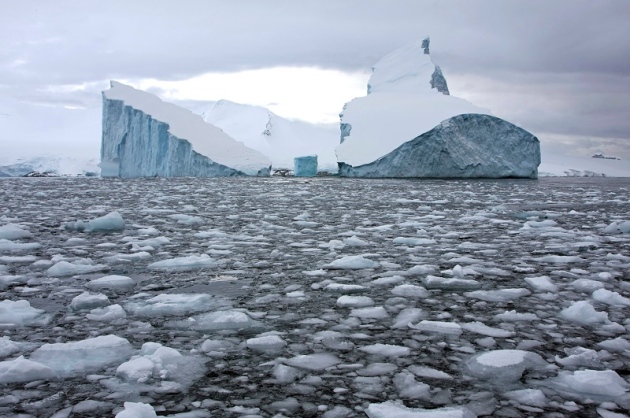 Shifting, strengthening winds will help to counteract future sea-level rise in Antarctica — and by doing so, they may help to stabilize ice sheets on some parts of the southern continent.

The band of westerly winds that encircles Antarctica has been speeding up and creeping southwards since the 1950s. The trend, largely driven by the Antarctic ozone hole, is expected to continue thanks to climate change — and could alone cause a drop in sea level of up to 40 centimetres over 70 years, according to research led by Leela Frankcombe, a geophysicist at the Centre of Excellence for Climate System Science in Sydney, Australia1.

“That’s really significant,” says Aimee Slangen, who studies sea-level variation at the Australian Commonwealth Scientific and Industrial Research Organisation in Hobart and was not involved with the study.

Along Antarctic shores, the effect of the winds could counteract almost half of the average global sea-level rise expected by the end of the century, which the latest report of the Intergovernmental Panel on Climate Change estimates to be up to 97 centimetres. That report notes, however, that tens of centimetres of extra rise might be caused by the unpredictable collapse of the West Antarctic Ice Sheet.

The reason for the sea-level drop is the Coriolis force, a consequence of Earth's rotation. As the Antarctic Circumpolar Current flows clockwise around Antarctica, it causes sea water to slope higher to the north and lower to the south. As the westerly winds strengthen by up to 15% over the next 70 years, both the current and this slope are expected to increase.

Frankcombe’s results are not entirely surprisIing: other climate models have similarly predicted this effect. But her model has a higher resolution, and so is able to include the effects of eddies in the Southern Ocean, which most full climate models are not able to incorporate.

The work, published online this month in Geophysical Research Letters1, also finds that the southern shift of the wind by up to 4 degrees latitude over the next 70 years could significantly decrease the transfer of heat from the air to the sea. Because the Southern Ocean has a key role in global ocean circulation, this would lower the heat content of the entire ocean. In the absence of global warming, this chain of events could cause global sea levels to drop by about 5 centimetres. “Our model really does show how fundamental the Southern Ocean is,” says Frankcombe. “It can affect global sea levels.”

Shifting winds are not the only reason why local sea levels will be kept in check. Slangen has shown that as the massive ice sheets in Antarctica and Greenland lose weight by melting, the poles lose some of their gravitational pull. As a result, water slopes away from the poles and towards the equator. This means that the net sea-level rise around the Antarctic Peninsula is expected to be about zero by 2100, she says2.

The big question, however, is whether these effects will have a stabilizing effect on the ice sheets.

In theory, sea-level rise would help to cause the collapse of the West Antarctic Ice Sheet. The base of this ice sheet is underwater; the weight of the continent’s ice presses it down onto bedrock, preventing it from floating like an iceberg. Thinning of the ice-sheet edges or rising sea levels would lever more of the ice up off bedrock, pushing the ‘grounding line’ ever farther inland. Slowing sea-level rise should hinder this, says Slangen. By contrast, a drop in sea level might cause some ice to flow more steeply and quickly into the sea. “There’s a lot of complicated processes happening there,” she says.

Sridhar Anandakrishnan, a glaciologist at Pennsylvania State University in Philadelphia, notes that the biggest factor affecting the stability of the western ice sheet is not sea level but water temperature. Warm waters can melt floating ice shelves from the bottom up at rates of metres per year, allowing continental ice to flow outwards to replace it. “Relative sea-level rise is not what makes the ice shelves go away in the 200-year timescale,” says Anandakrishnan. Although a decline in heat exchange in the Southern Ocean might help, he adds, it depends on exactly where those cooler waters hit the ice. “I’m not convinced that’s going to help us a lot,” he says.