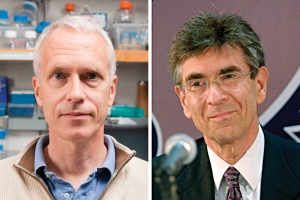 Two molecular biologists who have spent decades uncovering the workings of proteins central to cell communication have won this year’s Nobel Prize in Chemistry, to general acclaim from others in the field.

Brian Kobilka at Stanford University School of Medicine in California and Robert Lefkowitz of Duke University Medical Center in Durham, North Carolina, were granted the award for their work on G-protein-coupled receptors (GPCRs), the major players in mammalian cell signalling (see 'Cell signalling: It's all about the structure').

“The many hundreds of seminal contributions they have made have really helped us understand how this important family of proteins work,” says Roger Sunahara, a pharmacologist at the University of Michigan in Ann Arbor, who works closely with Kobilka.

“It’s an absolutely fantastic award, and richly deserved,” says Chris Tate, who works on GPCR structures at the MRC Laboratory of Molecular Biology in Cambridge, UK. "Kobilka is a very quiet, thoughtful guy, but passionate about science and G-protein-coupled receptors. I can’t think of a nicer guy to win a Nobel prize,” he adds.

GPCRs loop across the membranes of cells, and recognize and pass on from outside the cell signals as diverse as a burst of adrenalin, the odour of a perfume, the taste of a food, the release of a neurotransmitter in the brain and even a flash of light witnessed by the eye. The receptors are already the targets of around 30% of all drugs, and scientists hope that an understanding of their structure and activity will aid in the development of more efficient pharmaceuticals that activate or shut down particular signals without affecting other processes. 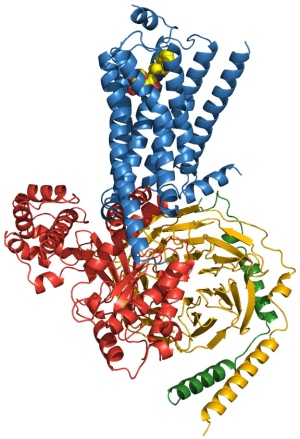 A signalling molecule (gold spheres) outside a cell activates a membrane-spanning G-protein-coupled receptor (blue), which passes the message on to a G protein (red, yellow and green) within the cell.

These proteins, Tate explains, are “the cornerstone of signalling in the human body”. They form a large family of around 800 closely related structures. An incoming signal — a molecule that latches on to the protein — changes the shape of the part of the receptor that lies outside the cell membrane. This change carries through to the portion of the protein inside the cell, setting off a cascade of intracellular events.

When Lefkowitz started his work on these receptors in the 1970s, however, none of this was well understood. By labelling hormones with radioactive iodine, Lefkowitz helped to determine which receptors they were binding to1. In the 1980s, he focused on the cell receptor for the hormone adrenalin and — aided by Kobilka, who had joined the lab on a fellowship — managed to clone and sequence the gene for the receptor2.

The next step — capturing a detailed crystal structure of the receptor — took Kobilka two decades. The protein tended to unravel when it was extracted from the cell membrane through which it was intimately looped, making it hard to purify and crystallize without the assistance of other molecules to hold the structure in place. In 2007, however, Kobilka's group published the receptor’s structure with a resolution of around 3.5 ångströms — sufficient to see how atoms are organized3.

Last year, his team revealed an even more impressive structure: the receptor frozen in action, connected to adrenalin at one end and the G protein at the other4. The work launched an explosion of activity in the field; researchers have already worked out the structures of around 15 of the receptors, and expect to publish many more in the coming years.

Today's two prizewinners are quite different in character, colleagues say: Kobilka notoriously reserved; Lefkowitz more outgoing. Gilbert Vassart, a biologist at the Free University of Brussels, says that Kobilka and Lefkowitz deserve the award, but that he would also have given a share of the prize to Krzysztof Palczewski at Case Western Reserve University in Cleveland, Ohio, whose group published the crystal structure of rhodopsin, another GPCR, in 20005.

The two Nobel winners have taken different approaches since they worked together in the 1980s. Kobilka has concentrated entirely on the structure and function of cell receptors, and has also founded a company in Santa Clara, California, called Conformetrx, which uses biophysical approaches to work out how drugs and receptors interact. Lefkowitz, meanwhile, has focused more on what happens once the receptor has been activated, and has helped to show that GPCRs don’t always involve G-proteins in their downstream effects; sometimes, another signalling pathway entirely is involved. Trevena, a company based on his work and headquartered in King of Prussia, Pennsylvania, creates drugs that try to avoid adverse side effects; its most advanced drug, for acute heart failure, is in phase II clinical trials.

Lefkowitz told the Nobel Foundation that the prize was “a total shock and surprise”, and that he was fast asleep when the phone rang. “I was going to get a haircut, but that will have to be postponed,” he added.