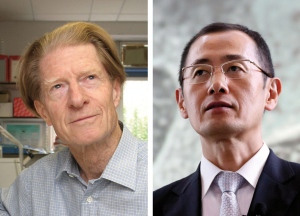 John Gurdon (left) and Shinya Yamanaka showed how to reprogram cells into their embryonic states.

The discovery that cells can be reprogrammed to an embryonic-like state has won this year’s Nobel Prize in Physiology or Medicine for two leading lights of stem-cell research: John Gurdon and Shinya Yamanaka.

Reprogrammed cells regain pluripotency, the potential to differentiate into many mature cell types. Many researchers hope that cells created in this way will eventually be used in regenerative medicine, providing replacement tissue for damaged or diseased organs. The field has become one of the hottest in biology, but the prizewinners’ discoveries were not without controversy when they were made.

Gurdon, who is based at the Gurdon Institute in Cambridge, UK, was the first person to demonstrate that cells could be reprogrammed, in work published 50 years ago1. At the time, scientists believed that cellular specialization was a one-way process that could not be reversed. Gurdon overturned that dogma by removing the nucleus from a frog egg cell and replacing it with the nucleus from a tadpole’s intestinal cell. Remarkably, the process was able to turn back the cellular clock of the substitute nucleus. Although it had already committed to specialization, inside the egg cell it acted like an egg’s nucleus and directed the development of a normal tadpole.

Gurdon was a graduate student at the University of Oxford, UK, when he did the work. He received his doctorate in 1960 and went on to do a postdoc at the California Institute of Technology in Pasadena, leaving his frogs in Europe. He did not publish the research until two years after he got his PhD, once he was sure that the animals had matured healthily. “I was a graduate student flying in the face of [established] knowledge,” he says. “There was a lot of scepticism.”

Mammalian cells did not prove as amenable to this process, known as cloning by nuclear transfer, as frog cells. It was nearly 35 years before the first cloned mammal — Dolly the sheep — was born, in 1996. Dolly was the only live birth from 277 attempts, and mammalian cloning remained a hit-and-miss affair.

Scientists were desperate to improve the efficiency of the system and to understand the exact molecular process involved. That is where Shinya Yamanaka of Kyoto University, Japan, made his mark. Yamanaka — who was born the year that Gurdon published his formative paper — used cultured mouse cells to identify the genes that kept embryonic cells immature, and then tested whether any of these genes could reprogram mature cells to make them pluripotent.

In the mid-2000s, the stem-cell community knew that Yamanaka was close. “I remember when he presented the data at a 2006 Keystone symposium,” says Cédric Blanpain, a stem-cell biologist at the Free University of Brussels. “At that time he didn’t name them and everyone was betting what these magic factors could be.”

A few months later, attendees at the 2006 meeting of the International Society for Stem Cell Research in Toronto, Canada, packed out Yamanaka’s lecture. The audience waited in silence before he announced his surprisingly simple recipe: activating just four genes was enough to turn adult cells called fibroblasts back into pluripotent stem cells2. Such induced pluripotent stem (iPS) cells could then be coaxed into different types of mature cell types, including nerve and heart cells.

Gurdon will be 80 next year, but he continues his laboratory work on the molecular basis of reprogramming in frogs. With his mop of floppy hair and wry sense of humour, he is regarded by colleagues as a typical English gentleman, running his research institute with friendly collegiality. Gurdon sometimes notes that the honour of having an institute named after him — it was previously known as the Wellcome Trust/Cancer Research UK Institute — is usually accorded only to the dead, something colleagues can only smile at. “John is very much the active scientist,” says Azim Surani, a principal investigator at the institute.

Yamanaka, who has just turned 50, is equally well-regarded by colleagues, who describe him as smartly dressed, polite and meticulous. In an interview with the Nobel Foundation, based in Stockholm, he said that the phone call informing him that he had won the award had interrupted him as he was cleaning the house. Yamanaka’s research has won huge backing from the Japanese government, which now funds a large research centre for him at his university3 and has agreed to support a stem-cell bank for clinical use4. Yamanaka began his career as a surgeon, but, he said, “I had no talent for it, so I decided to change my career from clinics to laboratories”. “But I still feel that I am a physician — my goal, all my life, has been to bring stem-cell technologies to clinics.”

Both scientists are aware that translating their discoveries into regenerative therapies will take its own time. “That’s why it is so important to support basic science — it often happens that therapeutic benefit comes quite a long time after the initial discovery,” Gurdon told the Nobel Foundation.