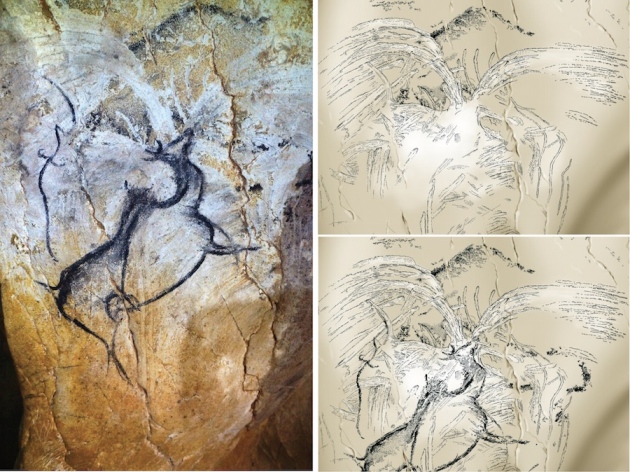 Mysterious paintings in one of the world’s most famous caves could mark the oldest-known depiction of a volcanic eruption. Spray-shaped images in Chauvet cave in France were painted at around the same time as nearby volcanoes spewed lava high into the sky, reports a paper published this month in PLoS ONE1.

Chauvet-Pont D'Arc cave, in southern France, is one of the world’s oldest and most impressive cave-art sites. Discovered in 1994 and popularized in the Werner Herzog documentary 'Cave of Forgotten Dreams', Chauvet contains hundreds of paintings that were made as early as 37,000 years ago.

Fearsome animals such as woolly rhinoceroses, cave lions and bears dominate Chauvet’s imagery. But one of its innermost galleries — named after a giant deer species, Megaloceros, that is depicted there — also contains a series of mysterious spray-shaped drawings, partly covered by the Megaloceros painting. A nearby gallery holds similar spray imagery, as does a wall near the cave’s original entrance, but researchers have not determined what the images represent.

The depictions are unique to Chauvet, notes Sebastien Nomade, a geoscientist at the University of Paris-Saclay in Gif-Sur-Yvette, France, who led the study. The Bas-Vivarais volcanic field, a well-known site containing more than a dozen extinct volcanoes, lies just 35 kilometres from the cave, but only eruptions that happened before humans occupied Chauvet had been dated, Nomade says.

In the hope of calculating the dates of younger eruptions, Nomade visited Bas-Vivarais in 2012 and sampled rock from three volcanic centres. By measuring the levels of different isotopes of radioactive argon gas, his team determined that the region had been lit up by a series of eruptions between about 19,000 years and 43,000 years ago. The events would have been dramatic ‘strombolian’ eruptions, Nomade says — named after those typical of the Stromboli volcano in Italy — with lava spewing 200-plus metres into the sky and flowing down the volcanoes' slopes. Each cone would have erupted once or twice before going extinct.

Hunter-gatherers living in the region at the time must have seen the eruptions, Nomade says, noting that the 35 kilometres between the Chauvet cave and Bas-Vivarais would have offered a safe vantage point. “You just have to climb the small hill on top of Chauvet, and looking north you see the volcanoes. During the night you could see them glowing and you could hear the sound of the volcanic eruption.” 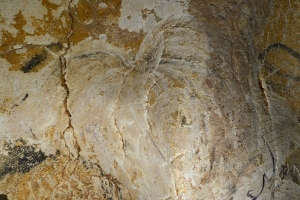 Another spray-shaped painting in the Chauvet cave.

A matter of record

If Nomade and his team are correct, Chauvet’s volcano imagery would represent the earliest record of any eruption. Other, younger examples include a mysterious 8,600-year-old mural found on a wall at the Neolithic site of Çatalhöyük in central Turkey, which may be a map depicting a nearby volcano that erupted at around that time2. And the poet Pliny the Younger famously documented the ad 79 eruption of Vesuvius (which took the life of his uncle, Pliny the Elder). 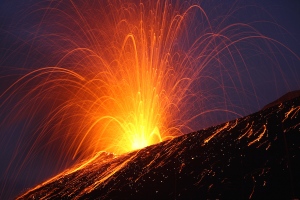 A ‘strombolian’ eruption (in Java, Indonesia).

Axel Schmitt, a geoscientist at Heidelberg University in Germany whose team studied the eruption near Çatalhöyük, says that the dating of the eruptions near Chauvet is solid. But it will be difficult to get more precise dates from the volcanic basalt rock in the Bas-Vivarais, he says. “You have to be lucky to find the right sample.”

“I think they make a pretty good case that it’s potentially a depiction of the kind of volcano that one sees on the landscape,” says Michael Petraglia, an archaeologist at the University of Oxford, UK. Depictions of natural events in rock art are rare, he notes, but this could be because they are too abstract or because researchers simply haven’t looked. “Maybe there’s more of this out there than we have realized.”