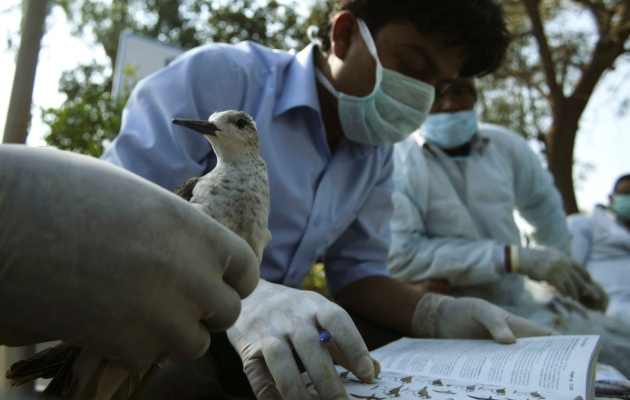 Countries with endemic H5N1 avian flu, such as India, often have limited resources to control the virus.

Why would scientists deliberately create a form of the H5N1 avian influenza virus that is probably highly transmissible in humans? In the growing debate about research that has done precisely that1, a key question is whether the public-health benefits of the work outweigh the risks of a potential pandemic if the virus escaped from the lab.

For the scientists who have created the mutated strains of the H5N1 virus, the justifications are clear. Surveillance of flu viruses could, they argue, allow health organizations to monitor birds and other animals for the mutations that would provide an early warning of a pandemic and enable authorities to act quickly to contain the virus.

That claim is meeting with scepticism, however. More than a dozen flu experts contacted by Nature say they believe that the work opens up important vistas in basic research, and that it sends a valuable warning about the potential for the virus to spark a human pandemic. But they caution that virus surveillance systems are ill-equipped to detect such mutations arising in flu viruses. As such, work on the viruses is unlikely to offer significant, immediate public-health benefits, they say.

That tips the balance of risk–benefit assessment in favour of a cautious approach, says Michael Osterholm, who heads the University of Minnesota’s Center for Infectious Disease Research and Policy in Minneapolis, and who is a member of the US National Science Advisory Board for Biosecurity (NSABB).

In a paper submitted to Science, Ron Fouchier’s team at Erasmus Medical Center in Rotterdam, the Netherlands, found that just five mutations allowed avian H5N1 to spread easily among ferrets, which are a good proxy for how flu behaves in other mammals, including humans. All five mutations have been spotted individually — although not together — in wild viruses. Yoshihiro Kawaoka of the University of Wisconsin-Madison and his colleagues have submitted similar work to Nature, which is partially described in an online Comment published this week2.

Acting on advice from the NSABB, the US  government last month asked Science and Nature to publish only the broad conclusions of the two studies, and not to reveal the scientific details, in order to limit the risk that uncontrolled proliferation of such research might lead to accidental or intentional release of similar mutant viruses. The journals and the authors have agreed to this redaction, provided that a mechanism is established to disseminate the data to flu researchers and public-health officials on a need-to-know basis. The US government, the World Health Organization (WHO) and other bodies are now trying to put this mechanism together, along with a framework for inter­national oversight of such research.

Last week, in a statement jointly published in Nature and Science3, 39 flu researchers declared a 60-day pause in the creation of lab mutant strains of the H5N1 avian flu virus. The hiatus, they hope, should give scientists and policy-makers time to debate how such research might best proceed, and what safety measures should be required of labs that handle the virus. The signatories to the statement, including the key authors behind the controversial research, plan to bring together some 50 experts at a WHO-hosted meeting in Geneva, Switzerland, next month to discuss these thorny issues.

Scientists contacted by Nature say that basic research on such mutated strains may eventually yield insight relevant to developing pandemic countermeasures such as drugs and vaccines. And they all agree that the new research has done the world a service by showing that H5N1 seems capable of evolving the ability to spread rapidly among humans, in contrast to what some scientists have claimed.

Fouchier’s study “raises a red flag”, says Ilaria Capua, an animal-flu expert at the Experimental Animal Health Care Institute of Venice in Legnaro, Italy. “That is the real, and most important message, of this whole exercise.” It should prompt donors and international organizations to ramp up their funding of efforts to control outbreaks of the H5N1 virus in poultry, and so give the virus fewer opportunities to evolve into a human pathogen, she says. Other scientists add that it should force governments to rethink existing vaccine technologies, which are only capable of supplying vaccine six months after a pandemic starts, and of producing enough vaccine for a small fraction of the world population.

But the notion that the research offers a guide to dangerous variants that could be stamped out before they spread is unrealistic, say Osterholm and other researchers. “In order to even consider the possibility of reducing the animal reservoir of an emerging pandemic virus, one would need rapid and complete detection of virus in all geographical areas,” Osterholm says. Yet surveillance of H5N1 in poultry worldwide is patchy, particularly in poorer countries, where the virus is prevalent. It is also largely geared towards simply detecting and monitoring outbreaks, and few of the viral samples collected are ever sequenced.

Last year, global surveillance resulted in partial sequences from just 160 H5N1 isolates being submitted to GenBank, the main repository of such data (see ‘Sequence shortfall’). And virus isolates are often sequenced months or years after they are collected — hardly the swift turnaround of a pandemic alert system. “Could we pick up a mutation in real time and stop a pandemic?” asks Capua. “Not with the surveillance we have now.” 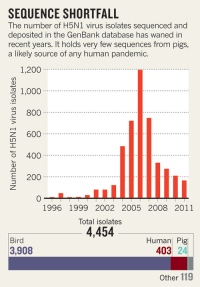 Moreover, if H5N1 surveillance in poultry is poor, the situation is far worse in pigs, where there is almost no systematic surveillance, even in richer countries. H5N1 infections in pigs are uncommon and cause only mild illness, creating little economic incentive to monitor them4. GenBank contains partial sequences from just 24 pig H5N1 isolates. Yet pigs are a likely source of a human pandemic H5N1 virus because they are susceptible to both human and avian viruses, creating opportunities for genetic reassortment in co-infected animals.

Fouchier argues that many countries collect more, and more-timely, sequence data than those deposited in GenBank. “That some outbreak countries are not yet fully capable of making optimal use of such data should not lead to the fatalistic conclusion not to generate and share the data as they emerge,” he says. “Warnings weeks after dangerous viruses have emerged in poultry, or mammals, may be better than no warnings at all.”

But even if a candidate pandemic H5N1 virus was detected in poultry, culling flocks to eliminate it would be no mean feat. H5N1 has become endemic in many countries, including China, Vietnam, Indonesia, Bangladesh, India and Egypt, and the United Nations’ Food and Agriculture Organization estimates that, with current resources, it would take at least a decade to stamp out the virus in such countries.

The relative ease of making H5N1 transmissible between mammals in the lab should now prompt the world to address these glaring inadequacies in surveillance, says Jeremy Farrar, director of the Oxford University Clinical Research Unit in Ho Chi Minh City, Vietnam. Molecular technologies need to be made more easily available and affordable to countries at risk, and genetic surveillance more comprehensive and timely. But building such systems would require sustained political will, financial resources, and overcoming major logistical hurdles in the field.

Even if such a revolution occurred, looking only for the mutations reported by Fouchier and Kawaoka would be short-sighted, says Marc Lipsitch, an epidemiologist at the Harvard School of Public Health in Boston, Massachusetts. “There are many, many, other ways that the virus could become transmissible,” he says. “It would be very unfortunate if people say that if we don’t see these mutations, we don’t need to worry,” he adds. Moreover, says Farrar, H5N1 is far from being the only flu virus that poses a pandemic threat. But he believes that more extensive genetic surveillance could eventually pay off. “The research points us to where we need to go, rather than where we are today,” he says. “Before this research, we were all guessing what changes might be needed. This work pushes that forward.”

Asked whether there were any areas in which the mutant flu research could provide immediate public-health benefits, Anthony Fauci, director of the US National Institute of Allergy and Infectious Diseases, replies: “I would say that, in a perfect world, the immediate benefit would be in surveillance. But from a logistics standpoint, in the world we live in, that will be difficult to do.”

Because the value of these studies is more likely to emerge in the longer term, it makes sense to take time to consider how such research can proceed safely, he says. “What’s the rush?” he asks. “I am very much in favour of having a pause in the research.”