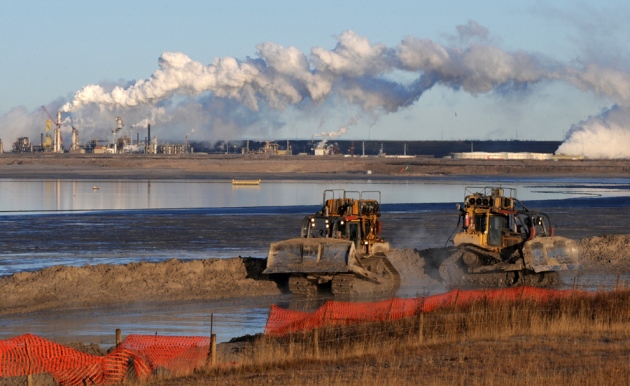 Producing oil from Canada's oil sands is more carbon-intensive than most conventional sources.

Environmentalists and many politicians have called the oil sands a planetary-scale threat as they fight to prevent further development of the resource. Andrew Weaver and Neil Swart, both climate scientists at the University of Victoria in British Columbia, listened to the rhetoric and decided to run some calculations. Because of the energy-intensive process for producing oil from this region, it is true that greenhouse gas emissions are higher than average. But their work underscores evidence that the environmental impacts of producing the oil sands are primarily local rather than global. “We wanted to address the carbon-bomb question,” Weaver says. “And frankly, these numbers aren’t as big as I thought they would be.”

What are the consequences if Canada pushes forward with development of the oil sands?

Weaver and Swart tried to answer this question in a recent commentary in Nature Climate Change1. They modelled the effects on global climate of the carbon emissions that would result if all of the oil available in the Alberta reserves were to be burned. Their results suggest that complete development of the sands would boost the average global temperature by roughly 0.36 °C, which is about half of the warming seen over the past century. But that calculation represents an emissions ceiling. In practice, burning every tonne of carbon underground would be virtually impossible.

So what is the likely impact?

Restricting the analysis to proven reserves — those believed to be economically viable using present technologies — the duo calculated a temperature increase of 0.02 °C. Taking into account the portion of the reserve that is already under active development, the authors found that the impact was “almost undetectable”. But their analysis did not delve into more subtle comparisons of the overall “life-cycle” greenhouse gas emissions of various fuels

What about greenhouse gas emissions from the oil sands development process?

Oil sands are as thick and sticky as their other moniker — tar sands — would suggest. Converting that goop into a liquid that can flow through a pipeline requires the use of heat and steam, which consumes energy and increases emissions. However, such a life-cycle comparison is not included in Weaver and Swart’s analysis, owing to the complexity of assessing future technological changes for this and other fuels. But their calculations suggest that a full life-cycle analysis increases the overall emissions from oil sands by roughly 17%.

Are the oil sands dirtier than conventional crude in terms of greenhouse gas emissions?

Yes, generally speaking. But there are many varieties of crude as well as various production methods that factor into cumulative life-cycle greenhouse-gas emissions. Oil from Norway and Saudi Arabia is easy to produce and relatively clean in terms of overall emissions. But depending on how much energy goes into production and other factors — such as the flaring of the natural gas produced as a by-product, which is common in Nigeria — the dirtiest conventional oils could be just as bad or even worse than crude from the oil sands.

What about local environmental issues, such as water quality and air pollution?

A study published last week by researchers at Environment Canada in Toronto used satellite measurements to analyse emissions of nitrogen dioxide and sulphur dioxide from the oil sands2. Emissions of nitrogen dioxide, in particular, have increased alongside oil development in recent years and are on par with emissions from individual coal-fired power plants. In areas where the sands are mined and cooked to produce oil, the development has also resulted in concerns about water pollution and eventual reclamation. In situ production, by contrast, uses steam injection to liberate the oil underground, which reduces surface disturbance but actually increases greenhouse-gas emissions as a result of higher energy consumption.

Does development of the oil sands depend on the proposed Keystone XL pipeline, which would link Alberta with US oil refineries along the Gulf of Mexico?

Environmentalists see the pipeline, proposed by Calgary-based TransCanada Corporation, as enabling the development of a dirty fuel, and US President Barack Obama seemed to be catering to them when he nixed the project, at least temporarily, in January. But barring a precipitous drop in oil prices or a sudden imposition of carbon regulations, Canada will probably find customers for its oil one way or another. The Obama administration cited concerns about the route chosen for the first proposal, leaving the door open to a revised application down the road, and this week Obama seemed to welcome news that TransCanada is considering a new route. Canada is also investigating other options for piping the oil directly into international markets.

What’s next on the scientific agenda?

Concerns about global warming in general and regulations in places like California and Europe have spurred scientists to tackle life-cycle emissions for the full suite of energy sources in recent years. Despite considerable progress, however, major uncertainties remain, weighing heavily as policy-makers seek to create policies that promote cleaner fuels and reduce greenhouse-gas emissions. Governments will surely demand additional detail from scientists in the coming years.