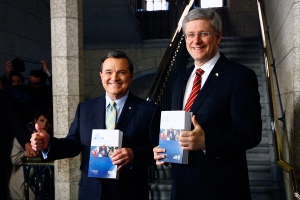 Canada's latest budget will slash spending on the environment and push for more collaboration between basic researchers and industry. The changes are aimed at stimulating the economy and balancing the budget by 2015, but researchers fear that they will undermine the country's long-term competitiveness. The budget is the first since the Conservative party gained a majority in parliament last year.

“This is disastrous,” says James Turk, executive director of the Canadian Association of University Teachers in Ottawa, Ontario. “The government has no understanding of how scientific advancement is made. No appreciation of blue-sky research.”

Like many nations in the West, Canada has been under pressure to cut spending, balance its budget, and stimulate its sluggish economy. The 500-page budget will ease the environmental review of major projects and cut 12,000 government jobs, while boosting investment in industrial research and natural-resources development.

To balance its budget in three years, the government introduced a cost-cutting exercise to its 68 departments and agencies, asking each to envisage scenarios of 5–10% reductions in their bottom lines. Under the resulting cuts, funding to the environment portfolio will drop by 8.3%. Environment Canda will lose Can$13.3 million (US$13.3 million) from its Can$1.1 billion budget this year, and Can$31.5 million and Can$53.8 million in the following two years. The announced cuts could mean more job losses at the agency, which announced in August that 700 positions might change or disappear by 2014 (see 'Canadian ozone network faces axe').

The budget also eliminates a federal advisory panel on the environment. The National Round Table on the Environment and the Economy, an independent agency established in the 1990s, studied questions of climate, water, energy, biodiversity and governance, and offered advice to the Canadian prime minister. But its reports frequently challenged the government’s views, says Andrew Weaver, a climate modeller at the University of Victoria in British Columbia. Combined with the announced cuts at Environment Canada, it is clear that “the environment is a huge loser in this budget,” he says.

To enhance partnerships between industry and academia, the budget includes a Can$37-million annual boost to the country’s three main granting agencies — the Canadian Institutes for Health Research (CIHR), the Natural Sciences and Engineering Research Council (NSERC), and the Social Sciences and Humanities Research Council. But the money will have to come from savings generated within each council. The NSERC and the CIHR have each planned savings of Can$15 million to their approximately Can$1-billion budgets in 2012–13, increasing to Can$30 million for each of the next two years.

Researchers had been hoping for increases to operating grants, as success rates for both the NSERC’s Discovery Grants and the CIHR’s operating grants have been in decline for more than five years. “Nothing in this budget is going to fix that,” says Turk.

As expected, the budget overhauls the National Research Council (NRC) of Canada, which runs most of the federal government’s research laboratories. The reforms follow many of the recommendations put forward last October by an expert panel that reviewed federal investment in the NRC (see 'Panel would change Canada’s research landscape'). The NRC has been given Can$67 million specifically for it to refocus on business-driven, industry-relevant research. Earlier this week, Gary Goodyear, the minister of state for science and technology, said the NRC had begun to “lose its focus”, and that it would be transformed into a one-stop shop for businesses and offer concierge services to link businesses with federal programmes aimed at boosting innovation.

The government continues to fund the Canada Foundation for Innovation (CFI), Genome Canada and the Canada Space Agency. The CFI, which invests in research infrastructure, scored Can$500 million over five years beginning in 2014. Genome Canada was not so lucky. In the past, the non-profit organization has received annual federal contributions as high as Can$160 million, but the latest budget contains just Can$60 million over two years to launch a new applied research competition in the area of human health. The Canadian Space Agency will continue to participate in the International Space Station mission until 2020. But it also faces pressure to generate internal savings to its Can$425 million budget over the next few years, beginning with Can$7.9 million this year and steeply ramping up to Can$29.5 million by 2014.

The research community is apprehensive. Although it is clear that cuts are coming, the budget remains vague about how they will be implemented. “It’s hard to gauge the impact,” says Paul Dufour, a policy expert at the science-policy agency Paulicyworks in Gatineau, Quebec. “There’s a lot of ambiguous wording in the budget, particularly in terms of what is to come.”