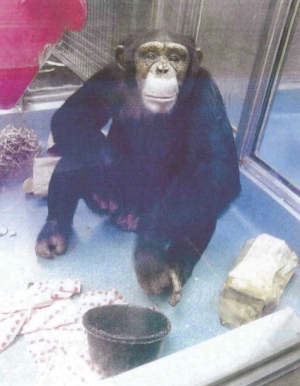 Chaos, a then-healthy 8-year-old male, died in transit to a Louisiana research center last year just days after this photo was taken.

Loretta, Ricky, Tiffany and Torian lead increasingly quiet lives, munching peppers and plums, perching and swinging in their 16-cubic-metre glass enclosures. They are the last four chimpanzees at Bioqual, a contract firm in Rockville, Maryland, that since 1986 has housed young chimpanzees for use by the nearby National Institutes of Health (NIH). Now an animal-advocacy group is demanding that the animals' roles as research subjects is brought to an end.

Researchers at the NIH’s National Institute of Allergy and Infectious Diseases (NIAID) and the Food and Drug Administration have used the juvenile chimpanzees to study hepatitis C and malaria, as well as other causes of human infection, such as respiratory syncytial virus and norovirus. But now the NIH’s demand for ready access to chimpanzees is on the wane as the scientists who relied on them retire and social and political pressures against their use grow. The four remaining chimps are set to be returned soon to their owner, the New Iberia Research Center (NIRC) near Lafayette, Louisiana.

“Much of what I have done over the past years has been research in chimps,” says Robert Purcell, 76, who heads the hepatitis viruses section at the NIAID’s Laboratory of Infectious Diseases. “It’s just a good time now [to retire] as the chimps are essentially no longer available.”

Last December, a report from the US Institute of Medicine concluded that most chimpanzee research was scientifically unnecessary and recommended that the NIH sharply curtail its support. The agency has since set up a working group to review existing studies and advise on whether they should be ended. Purcell and his team have formally requested that one study on liver disease, involving three of the remaining chimps at Bioqual, should be allowed to continue.

But animal activists say that the Bioqual chimpanzees, which could undergo decades more research at the NIRC, should be retired. On 5 July, the Physicians Committee for Responsible Medicine (PCRM), an animal-advocacy group in Washington DC, launched a petition and wrote to NIH director Francis Collins urging him to intervene to ensure that the animals are placed in a federally supported sanctuary in Louisiana called Chimp Haven.

In reply, the NIH issued a statement noting that the Bioqual animals are leased, but not owned, by the agency. As a result, it said, “NIH does not have authority over privately owned chimpanzees and cannot decide where they are placed”.

The NIRC, the chimps’ owner, and part of the University of Louisiana at Lafayette, houses around 350 research chimpanzees and conducts studies on them for commercial clients. It has for decades leased young animals to NIAID. Thomas Rowell, the NIRC's director, could not be reached for comment.

The activists are also concerned because last year one chimpanzee, an 8-year-old male called Chaos, died during transit from Bioqual to the NIRC. The US Department of Agriculture, which enforces the Animal Welfare Act, is investigating the incident. Procedures have changed since; when eleven other chimps were shipped back to the NIRC last month, the truck was driven by a vet, and an animal technician rode with the animals.

The remaining four chimps at Bioqual are scheduled to be shipped back to the NIRC soon: Loretta, a three-year-old that has just completed a two-year study probing how malaria parasites resist chloroquine and artemisinin, two key drugs against the disease, will travel to Louisiana within weeks. Seven-year-old Ricky, with Tiffany and Torian, who are both four years old, will follow a few months later. Purcell is using them to study a possible infectious trigger of primary biliary cirrhosis, a chronic autoimmune disease of the liver that is usually fatal without a liver transplant.

Purcell says that his team hopes to follow the animals for several years after their return to the NIRC, drawing blood and taking liver biopsies at intervals to track the slowly developing disease. “If we can confirm that this is a transmissible disease … one could try to develop a vaccine [or] therapeutic measures.” If the animals are retired, he says, “all of that would be lost”.

The PCRM disagrees. As well as lobbying Collins to retire the four animals at Bioqual, it is asking him to pressure the NIRC to retire the eleven recent returnees as well. It has dubbed the animals 'the Rockville 15'.

The activists argue that the animals are not needed for the rapidly dwindling research, noting that the NIH instituted a moratorium on funding new studies when the IOM report was issued last year and that, at the time, Collins estimated that funding for perhaps half of current grants would be ended.

“All of these elements argue for the lack of necessity of these 15 individuals in future research and for their retirement to Chimp Haven,” the PRCM wrote to Collins.