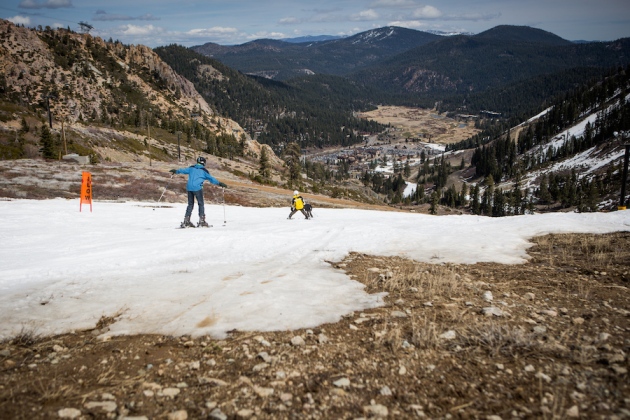 A historic drop in spring snowpack has affected recreation in the Sierra Nevada mountains.

The spring snowpack on mountains crucial to California's water supply reached its lowest level this year in half a millennium, according to a study published1 on 14 September in Nature Climate Change.

Researchers combined tree-ring measurements from two previous studies to reconstruct the annual spring snowpack in the Sierra Nevada mountains stretching back to 1500. The historical data suggest that this year's low reading was an extreme event, likely unmatched in the past 500 years.

“This is an interesting contribution that seems to fit very well with the emerging evidence that the current drought in California is exceptional,” says Ben Cook, a climate scientist at the NASA Goddard Institute for Space Studies in New York City.

On 1 April, an official state survey at a site in the Sierra discovered no snow there for the first time in 75 years of tallies. Snow levels throughout the mountain range — which can provide up to 30% of California’s water in a given year — were at 5% of the annual average since the state began taking the measurements in 1950. The same day, California’s governor issued an executive order mandating a 25% reduction in potable urban water use statewide. 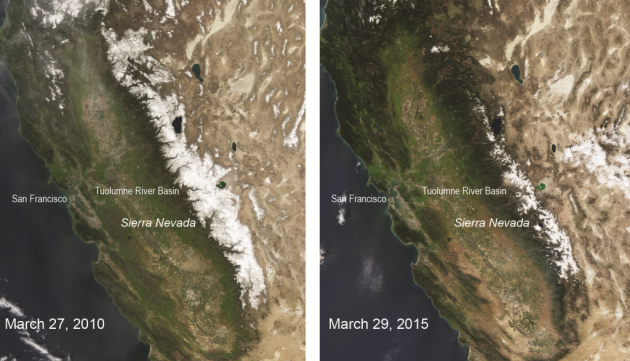 This satellite image shows snow loss in the Sierra Nevada between 2010 (left) and this year (right).

To determine how extreme those snowpack readings were, scientists turned to trees, which can serve as a faithful proxy of past climate conditions. Valerie Trouet, a tree-ring scientist at the University of Arizona in Tucson and an author of the latest study, says that blue-oak trees (Quercus douglasii) in central California are particularly good records because “they are super sensitive to winter precipitation”.

Trouet and her colleagues used tree-ring data from a previous study2 of 1,505 blue-oak trees to reconstruct the history of snowfall in the Sierra. Although the blue oaks analysed were not in the mountains themselves, they were close enough to record mountain precipitation. The trees tend to grow larger rings in wetter years than in drier years.

But other factors — such as temperature — also affect tree growth. The team used data from a different study3 that estimated annual temperatures in February and March throughout the western United States on the basis of another set of tree rings. Taken together, the temperature and precipitation reconstructions enabled the researchers to estimate the amount of water in the historical spring snowpack, which they expected to be greater in colder, wetter years.

When the scientists compared this reconstruction to snowpack measurements taken since 1930, their model accounted for nearly two-thirds of the observed annual fluctuations. “To my mind, I think it's a fairly robust reconstruction,” says Peter Brown, a dendrochronologist and the director of Rocky Mountain Tree-Ring Research in Fort Collins, Colorado.

Understanding the Sierra snowpack is especially important because it serves as a natural reservoir for Californians, Trouet says. When high temperatures — such as those that California experienced this past winter — combine with low precipitation, that reservoir vanishes. “Without snow,” she says, “you have no access at all during dry summers.”