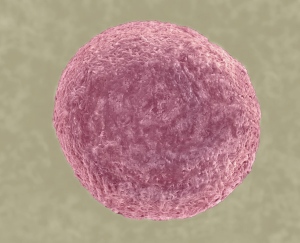 Human eggs (pictured) used in research could fetch thousands of dollars, if California loosens a law regulating their procurement.

California is set to pass a bill that would allow payments over and above 'direct expenses' to be made to women who donate eggs for research. The bill promises to increase the supply of eggs to scientists studying reproduction, but will not eliminate restrictions on research supported by the California Institute of Regenerative Medicine (CIRM) in San Francisco, a major funder of stem-cell research in the state.

After passing in the California State Assembly on 2 May, the bill is likely to be subject to a vote in the state senate as early as Thursday, according to the American Society for Reproductive Medicine in Birmingham, Alabama, which represents fertility clinics and researchers, and pushed for the bill. "We expect this bill to pass and the governor to sign it," says Sean Tipton, the society's public-affairs director.

The bill (Assembly Bill 926) would overturn a 2006 California law that prohibits payments for research eggs for anything besides "direct expenses" such as travel. The bill instead allows compensation for "time, discomfort, and inconvenience" — a standard commonly used in human studies.

In practical terms, the bill would bump up payments from hundreds to thousands of dollars. In Oregon — which, like most states, does not have regulations governing egg donation — women recently received US$3,000–7,000 each for eggs used in a study that created stem-cell lines from cloned human embryos.

The pay boost will help researchers to compete with fertility clinics for eggs, says Dieter Egli, a researcher at the New York Stem Cell Foundation. In Massachusetts, where a law similar to that of California's makes it difficult to recruit egg donors, Egli was involved in a study that several years ago spent $100,000 in advertising to find a single egg donor.

Ironically, the restrictive Massachusetts and California laws have their origins in efforts to promote human embryonic stem-cell research. In 2004, California enacted Proposition 71, a referendum which established CIRM and also mandated that women donating eggs to CIRM researchers be compensated only for direct expenses, in keeping with the policy of the US National Academy of Sciences. A separate 2006 law extended that restriction to all research in California. The new bill repeals only this broader law — leaving CIRM-funded researchers without a secure source of healthy eggs.

The reasoning behind the law remains relevant today, says Diane Tober, the associate executive director of the Center for Genetics and Society in Berkeley, California. Her centre is opposed to the bill, she says, because of concerns about donor coercion. "What situations are women going to put themselves in to pay the bills?" she asks. There are also health risks: the procedure, which involves weeks of painful hormone injections, can in rare cases cause massive enlargement of the ovaries and fluid build-up in the abdomen, which can lead to kidney failure. Little is known about the long-term effects of donation.

Insoo Hyun, a bioethicist at Case Western Reserve University in Cleveland, Ohio, notes that the new bill mandates oversight by institutional review boards (IRBs), which routinely consider whether compensation constitutes “undue inducement” to the point at which participants ignore risks.

But Hyun takes exception to a loophole in the new bill that applies to eggs left over from donors who are compensated for providing eggs to infertile women. According to Hyun, it is a largely unregulated transaction that can fetch more than $10,000 per collection. Under current law, these leftover eggs cannot be used for research. The proposed bill would allow researchers to use them, but also instructs IRBs to ignore how much women were paid for such eggs, provided certain conditions are met, such as the donor deciding she does not need the eggs herself. "The threat of undue financial inducement is one of the key ethical issues in egg donation for stem-cell and other biomedical research," explains Hyun, "This bill requires the IRB to disregard this. That's pretty strong language."

If California passes the bill, Rosario Isasi, a researcher at the Centre of Genomics and Policy at McGill University in Montreal, Canada, wonders whether Massachusetts will be the next to loosen its restrictions. "If California goes ahead, it will open the door to other jurisdictions to have open discussions about compensating women.”