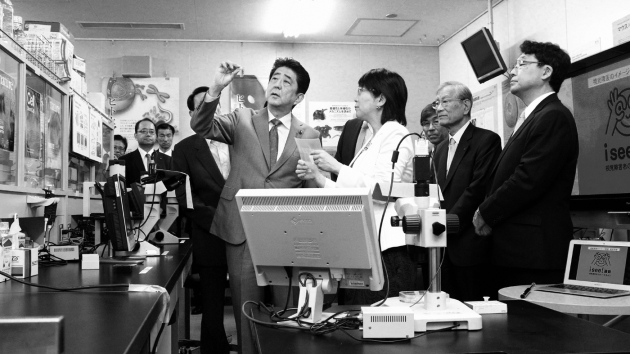 Japan’s premier scientific research institution, RIKEN, turned 100 this year, and celebrated with a grand ceremony attended by the empress and emperor. But not everybody was in the mood to party. In the old days, RIKEN was known as a paradise for scientists because of its generous funding. No longer: as Japan cuts off funds in the face of continuing financial uncertainty, the cracks are starting to show.

One scientist affected is Takaomi Saido, who researches Alzheimer’s disease at RIKEN’s Brain Science Institute (BSI) in Wako. At around the time of the centenary event in April, he was told that he would have 43% less money this year to support his work. Saido posted an angry response online, saying he wasn’t given enough warning to find money to pay his staff and take care of his mice, which he says are sent to 250 laboratories around the world.

The problem is one of priorities, and is neatly demonstrated by a white paper published by Japan’s science ministry last month. It is dominated by discussion of innovation, and how to foster greater interaction between businesses and academia to achieve it. One way is to drain funds from more-basic science; as a result, universities and research institutes, including RIKEN, are getting squeezed.

RIKEN’s budget has been cut by more than 20% over the past 10 years. In response, the BSI has reduced its number of principal investigators from 61 to 41 over that period.

Japan’s universities are in similar straits. Following reforms in 2004, their budgets have declined by 1% every year. The move was meant to make universities more responsive to strategic initiatives and more competitive, by aligning their research with industrial or military needs. But it has triggered other, less positive changes. The universities stopped hiring professors. New staff are brought in as contract employees, who flit from grant to grant to stay afloat.

The science ministry’s white paper acknowledges that this has “given birth to a situation in which young researchers, facing unstable employment conditions and economic uncertainty, are forced to aim for results that can be accomplished in the short term and in which true originality and creativity are difficult to realize”.

And it’s not just the young ones. Thanks to greater administrative and grant-writing burdens, university researchers say they can put little more than one-third of their work time into research, compared with just under half in 2002.

As the economic and political headwinds increase, Japan’s policymakers and administrators should do more to support scientific research through these unstable times. Universities need to make clear as early as possible what cuts are coming. RIKEN warned researchers that the incoming budget would be tight, but Saido says he heard nothing to suggest such a severe drop.

Institutions must also be more transparent. Other RIKEN researchers who shared Saido’s frustration were afraid to talk about it openly because they felt so uncertain about their positions. A coming reorganization of RIKEN institutes is a major cause for concern. Scientists there don’t know whether they will still have a job this time next year.

Japan rues the collapse of its ability to produce and publish important scientific findings, but it shouldn’t be surprised: its publication record maps neatly onto its science and technology investment, both flat since 2000. Its scientists see the drop in global competitiveness measured by research papers (from fourth in the world in 2004 to tenth in the world in 2014) and look with envy at China and other nations that are increasing both their funding and their publication rates. Japan is rightly proud of its scientific past, but it must do more to safeguard its future.