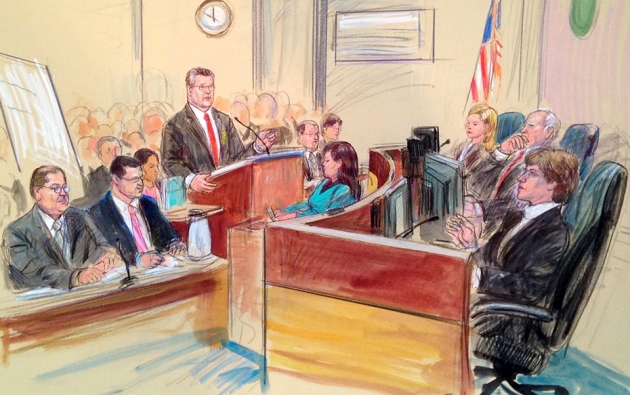 In December 2016, lawyers representing the University of California and the Broad Institute participated in oral arguments before a trio of patent-court judges.

The US Patent and Trademark Office (USPTO) has upheld a series of patents granted to the Broad Institute of MIT and Harvard for the CRISPR–Cas9 gene-editing technology.

The hotly anticipated decision could conclude a contentious battle between the Broad Institute in Cambridge, Massachusetts, and the University of California over intellectual-property rights to the potentially lucrative technology. Although the Broad was awarded its patents first, the University of California was the first of the two to apply for a patent on the technology. The California contingent also argues that its team in Berkeley invented the technique before investigators at the Broad.

Throughout the interference proceeding, which was announced in January 2016, the Broad’s lawyers argued that the University of California’s patent application did not specify how CRISPR–Cas9 editing could be adapted for use in eukaryotic cells — such as those in mice or people. The Broad’s patents did make that distinction: as a result, the lawyers argued, the two patent families would not overlap. The strategy would give the Broad control of what are likely to be the most lucrative applications of CRISPR–Cas9 gene editing in plants, livestock and humans.

In the wake of the USPTO decision, however, officials at the University of California said that its patent would nevertheless cover the use of CRISPR–Cas9 in all cells: eukaryotic or otherwise. One of the inventors on that patent, molecular biologist Jennifer Doudna of the University of California, Berkeley, likened the situation to licensing permission to someone who wants to use green tennis balls. “They will have a patent on the green tennis balls,” she said, referring to the Broad patents. “We will have a patent on all tennis balls.”

Even so, stock in Editas Medicine — a biotechnology firm in Cambridge, Massachusetts, that has licensed the patents from the Broad Institute — surged shortly after the USPTO verdict was announced. “We are pleased with the USPTO’s decision,” said Editas president Katrine Bosley in a statement. “This important decision affirms the inventiveness of the Broad’s work.”

“I think this decision is fair,” says Catherine Coombes, a patent lawyer at intellectual-property specialists HGF in York, UK. The University of California’s invention would cover the design of the RNA molecule that guides the key step in CRISPR–Cas9 gene editing, directing the Cas9 enzyme to a specific site in the genome. But getting that system to work in eukaryotes was an additional inventive step, Coombes says.

At a press conference soon after the decision was released, University of California attorney Lynn Pasahow said that the team had not yet decided whether it would appeal.

The two teams could also still reach a settlement, notes Kevin Noonan, a partner at the law firm McDonnell Boehnen Hulbert & Berghoff in Chicago, Illinois. The patent battle was unusually fierce, given that inventors on both sides worked for academic institutions, and their inability to settle the case before moving to an interference proceeding surprised some.

For now, the USPTO decision creates uncertainty for companies that may want to use the technology in eukaryotic cells, says Noonan. “Everybody gets to keep their patents,” he says. “This is maximum uncertainty for people because you don’t know if you have to get licences from both sides.”

If companies are forced to seek licences from both sides, the cost of commercializing CRISPR–Cas9 gene editing could increase, he adds. “These things should be able to be settled between universities,” says Noonan. “This will give a lot of fodder for those who think universities shouldn’t be in the patenting business.”Doudna argued at the press conference that the patent battle had not hampered research, given the speed with which researchers had taken up the technique and companies had rushed to commercialize it.

At the University of Delaware in Newark, technology-transfer officer Joy Goswami started to follow the patent case when a large company wavered over whether to license some of his university’s patents on applications of CRISPR–Cas9 in agriculture. The uncertainty around the patent landscape probably contributed to the hesitation, he says — but such uncertainty is not uncommon in biotechnology, particularly in the first few years after a hot invention.

“I don’t know if this is a big impact,” he says. “In general, I can tell that there has been a sense of cautiousness.”

Added comments from Coombes and Noonan