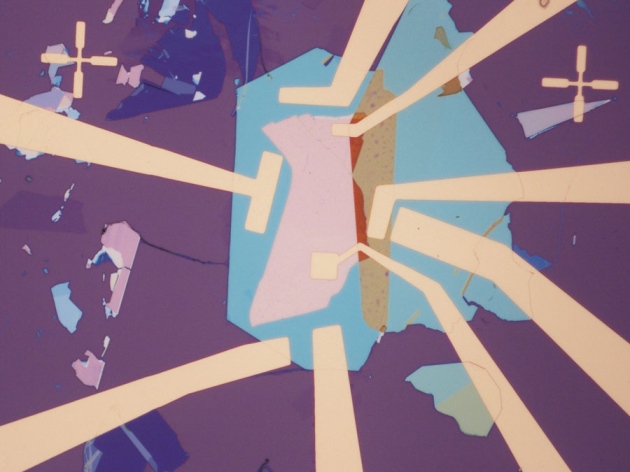 Layering graphene with other crystalline materials can create electronic devices such as transistors.

Kostya Novoselov has the tour down pat. After a friendly introduction, visitors are whisked to a clean room so that they can repeat the experiment that helped to win him a share of the Nobel Prize in Physics in 2010. The important bit can be done in seconds: press some sticky tape onto a chunk of graphite, then press it again onto an ultraclean silicon wafer. Peel it off, and some of the silver flakes dotting the wafer’s surface are atom-thick sheets of honeycombed carbon known as graphene.

The material has had a meteoric rise since Novoselov, his fellow Nobel laureate Andre Geim and their team at the University of Manchester, UK, reported this deceptively simple way of making graphene1. Hundreds of groups around the world have investigated its remarkable range of properties. It is highly conductive, and exhibits a variety of quantum-mechanical behaviours that had previously been seen only in more complex materials. It is thin and flexible, and its electrical and mechanical properties change in response to its surroundings. These characteristics and others suggest various electronics applications, including touch screens, sensors and frequency generators.

Now, the UK government is hoping that Novoselov and Geim can make money from graphene. In February, the UK Engineering and Physical Sciences Research Council (EPSRC) announced £38 million (US$59 million) in funding for a National Graphene Institute at the university. Scheduled to open in 2015, the centre will be a hub for translating basic research into industrial applications. Researchers at Manchester will mingle with industrial scientists loaned by domestic and overseas technology firms. Spin-off companies will flourish in off-campus research parks, sparking a technology revolution in a city that was once at the centre of the Industrial Revolution. That’s the vision, at least.

The initiative has its share of critics. Some academics in the United Kingdom say that the government wants to turn campuses into money-making enterprises. Elsewhere, it is not difficult to find researchers who say that graphene’s commercial value may be overhyped. Many doubt that a single material, however promising, can revive Britain’s atrophied electronics industry.

Novoselov acknowledges these arguments, but thinks that the investment will pay off. “These millions will come back quite soon,” he says. It will certainly mean an expansion of his own research enterprise, which is currently looking at how to combine graphene with other two-dimensional materials. It will also allow companies large and small to come to the university and conduct research that might further their own industrial ambitions.

The University of Manchester is a microcosm of a global boom in graphene research (see ‘Graphene goes global’). More than 20 academics from its chemistry, biology, materials science and engineering departments participate in weekly meetings about the material. The discussions are not only about electronics: some colleagues are studying graphene for use in biosensors, and others want to incorporate it into advanced materials. 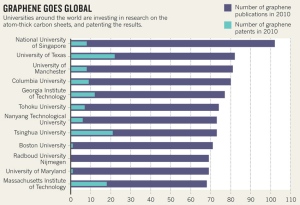 Demand for graphene from other departments has been so high that the group cannot keep up, so Branson Belle, one of Novoselov’s postdocs, launched a start-up firm in May to supply the rest of the university. Novoselov and Geim’s core group is growing too, and lab space is getting tight.

Novoselov and Geim were already asking the university for more room last year, and administrators were thinking about how to capitalize on the graphene explosion, says Nancy Rothwell, president and vice-chancellor of the University of Manchester. The pair, together with the university and the city council, submitted a proposal to the EPSRC, which awarded the university £26 million to build the graphene institute, along with £12 million for equipment.

The funding comes at a time of austerity for UK scientists, and it has raised eyebrows in other parts of the physical-sciences community. “The institute looks great and will certainly produce outstanding science,” says Pascal André, who works on nanomaterials at the University of St Andrews, UK. But he questions the wisdom of plunging £38 million into a single subject and location when the EPSRC is slashing research budgets elsewhere. “Will the whole UK innovation of the next 5–10 years be solely based around graphene?” André asks.

Novoselov says that he agreed to the institute only after he was assured that the money would not come at the expense of research grants.

Whether the government’s gambit will help the United Kingdom to compete in the global electronics market is uncertain. Britain lags behind the rest of the world in graphene patents, according to Quentin Tannock, the chairman of Cambridge IP, an independent patent consulting firm in Cambridge, UK. The country is competing with others such as South Korea, a major producer of consumer electronics, which already has a US$20-million, five-year programme to develop graphene-based display panels and other devices, according to Byung Hee Hong, a graphene researcher at Seoul National University. Hong’s group has been perfecting methods for producing sheets of graphene on an industrial scale. “I’m now working with seven different companies,” he says. But Hong adds that the strong commercial interest in Seoul may actually bode well for the new Manchester centre. “Korean companies are not working only in Korea,” he says.

“Will the whole UK innovation of the next 5–10 years be solely based around graphene?”

Even if companies are curious, graphene may still flounder as a commercial product, cautions Phaedon Avouris, a materials scientist at the IBM T. J. Watson Research Center in Yorktown Heights, New York. “There has been this circulating myth that graphene will replace silicon,” Avouris says. In fact, the material is not a semiconductor and lacks the necessary bandgap that would allow it to serve as a transistor — the basic element of all electronics — on its own. Avouris thinks that the material could find a use in niche markets such as high-frequency electronic devices, but he questions whether it will ever hit the big time.

Novoselov does not disagree. But, he adds, there have been enough suggested uses for graphene in different areas to make him want to look at other applications. “What I know for sure is that if we are not going to work on this, it will definitely not happen,” he says.

Novoselov has thrown himself into the project to build the graphene institute, meeting with architects and possible industrial partners on a weekly basis. Geim, who declined to be interviewed, is heavily involved too. Their group, however, is still at the cutting edge of graphene research, and is investigating the properties of layered graphene as well as other two-dimensional crystals such as boron nitride, molybdenum disulphide and niobium diselenide. Like graphene alone, the layered systems display exotic quantum behaviours and could have various applications. For example, in February, the group reported building a transistor by sandwiching boron nitride between two graphene sheets. When a voltage was applied, electrons tunnelled from one graphene sheet to the other, through the boron nitride barrier2.

“We’ve been doing good science for some time and we will do it for the years to come,” says Novoselov. But he is quick to add that now is the right time to make that science pay. “Our government is right: if we have this chance, we should take it.”

The initial online version of this story gave the wrong figure for the EPSRC’s investment in the National Graphene Institute. This has now been corrected.