Seven months after it was first spotted, a puzzle still hangs over the origin of the brightest supernova ever seen.

The exploding star, which was found in June 2015 and blazed brighter than 570 billion Suns at its peak, is one of a class of 'superluminous' supernovae. More than 100 times brighter and 1000 times rarer than ordinary supernovae, they have been spotted thanks to a growing number of automated telescope surveys devoted to spotting ephemeral stellar events over wide patches of sky (see 'The brightest supernovae').

Full details of last year’s explosion, known as ASASSN-15lh, were reported on 15 January in Science1. “It challenges all our previous theories of explosion mechanisms and power sources of superluminous supernovae,” says Subo Dong, an astronomer at the Kavli Institute for Astronomy and Astrophysics at Peking University in Beijing, whose team discovered the event. 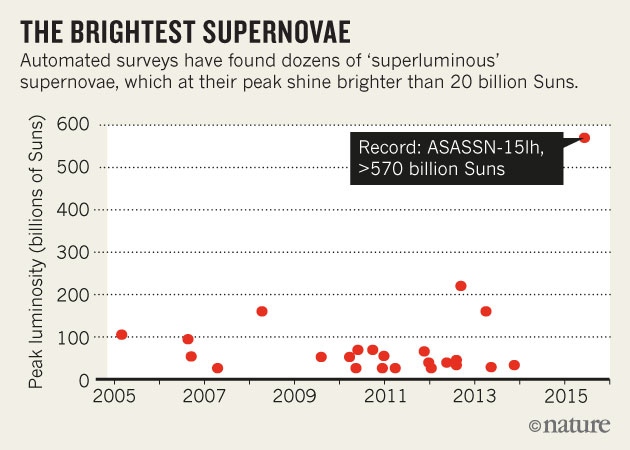 As Dong had noted in a report posted on the arXiv physics preprint server last July2, the blast belongs to a class of superluminous supernovae that are low in hydrogen. These kinds of explosions are thought to be fuelled by magnetars: compact, rapidly rotating, highly magnetized cores that are left behind after a supernova explosion casts off a star’s outer layers. The magnetar’s powerful magnetic field launches a wind that heats gas flying from the supernova. 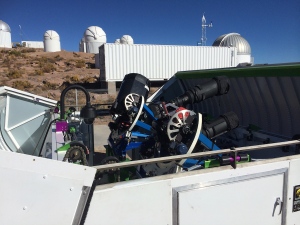 Two of the telescopes used by the All Sky Automated Survey for SuperNovae (ASAS-SN) that discovered the brightest-ever supernova, from Cerro Tololo, Chile.

But ASASSN-15lh is hotter and more luminous than other hydrogen-poor supernovae — so much so that a magnetar would need to be spinning at its maximum possible rate and convert its spin energy into heat at 100% efficiency, says Dong. Because such changes are so extreme, Dong doubts that the magnetar model would work.

And whereas other hydrogen-poor supernovae reside in dim dwarf galaxies, ASASSN-15lh seems to originate near the centre of a massive galaxy that is brighter than the Milky Way — although Dong’s team says that it can’t rule out the possibility that it exploded in a dwarf galaxy that seemed to align with the larger one.

There’s a slim chance that ASASSN-15lh is not a supernova at all. Instead, it might be the fireworks associated with a star that has been gravitationally torn apart by a supermassive black hole, says supernova observer Edo Berger at Harvard University in Cambridge, Massachusetts, who was not part of the study.

Dong’s team will now use the Hubble Space Telescope to try to figure out more about the blast’s home galaxy.