Mauricio Rocha-e-Silva thought that he had spotted an easy way to raise the profiles of Brazilian journals. From 2009, he and several other editors published articles containing hundreds of references to papers in each others’ journals — in order, he says, to elevate the journals’ impact factors.

Because each article avoided citing papers published by its own journal, the agreement flew under the radar of analyses that spot extremes in self-citation — until 19 June, when the pattern was discovered. Thomson Reuters, the firm that calculates and publishes the impact factor, revealed that it had designed a program to spot concentrated bursts of citations from one journal to another, a practice that it has dubbed ‘citation stacking’. Four Brazilian journals were among 14 to have their impact factors suspended for a year for such stacking. And in July, Rocha-e-Silva was fired from his position as editor of one of them, the journal Clinics, based in São Paulo.

“We’ve been caught wrong-footed,” says Rocha-e-Silva, a retired physiologist. The editors of the other three Brazilian journals collared by Thomson Reuters remain in place. In addition to these four journals, “there are a few others which played a part in this game, and they escaped”, he says.

Editors have tried before to artificially boost impact factors, usually by encouraging the citation of a journal’s own papers. Each year, Thomson Reuters detects and cracks down on excessive self-citation. This year alone, it red-flagged 23 more journals for the wearily familiar practice. But the revelation that journals have gained excessively from citations elsewhere suggests that some editors may be searching for less detectable ways to boost their journals’ profiles. In some cases, authors may be responsible for stacking, perhaps trying to boost citations of their own papers. 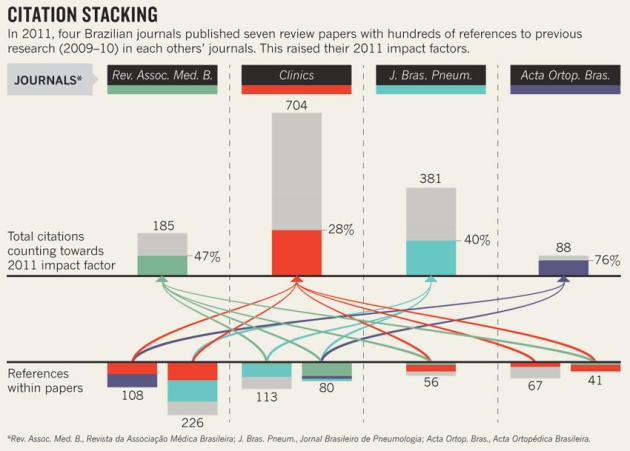 The journals flagged by the new algorithm extend beyond Brazil — but only in that case has an explanation for the results emerged. Rocha-e-Silva says the agreement grew out of frustration with his country’s fixation on impact factor. In Brazil, an agency in the education ministry, called CAPES, evaluates graduate programmes in part by the impact factors of the journals in which students publish research. As emerging Brazilian journals are in the lowest ranks, few graduates want to publish in them. This vicious cycle, in his view, prevents local journals improving.

Abel Packer, who coordinates Brazil’s system of free government-sponsored journals, known as SciELO, says that the citation-stacking venture was “unfortunate and unacceptable”. But he adds that many editors have long been similarly critical of the CAPES policy because it encourages local researchers to publish in high-impact journals, increasing the temptation for editors to artificially boost their own impact factors, he says.

Brazilian editors have campaigned for years for CAPES to change its system. “But they have always adamantly refused to do this,” Rocha-e-Silva says. Bruno Caramelli, editor of Revista da Associação Médica Brasileira, which was also hauled up by Thomson Reuters, says that by 2009, editors of eight Brazilian journals decided to take measures into their own hands (see ‘Citation stacking’).

But other editors involved in the agreement dispute Rocha-e-Silva’s assertion that they aimed solely to increase impact factors; Caramelli and Carlos Roberto Ribeiro de Carvalho, editor of the Jornal Brasileiro de Pneumologia, argue that the idea was also to show off articles in Brazilian journals, attracting better contributions and raising quality all round.

The punishment for the four journals caught out has been severe: CAPES says that any articles they published in 2010–12 will not count in its October 2013 evaluation of graduate programmes. The journals have also been suspended from CAPES’ evaluation system until their impact factors are restored.

Citation stacking first came to light in 2012, after Thomson Reuters was tipped-off about a case in which (now-retracted) articles in two journals contained hundreds of references to a third, boosting its impact factor (see go.nature.com/rehuit). In response, the company pioneered its new algorithm, designed to spot the practice.

What happened in the cases of the other ten journals censured for citation stacking is unclear. One involves a close pattern of citations between three Italian journals (International Journal of Immunopathology and Pharmacology, Journal of Biological Regulators and Homeostatic Agents and European Journal of Inflammation) all with the same editor-in-chief, Pio Conti, an immunologist at the University of Chieti-Pescara. Many of the authors on the relevant papers are also at that university. Conti told Nature that he regretted that the anomalous citations had occurred, but that “we have no quick explanation of the patterns”.

In another case, review articles with hundreds of references to Science China Life Sciences were meant not to lift its impact factor, but to clarify confusions after a rebranding and to “promote the newly reformed journal to potential new readers”, says its editor-in-chief Dacheng Wang, who is based at the Chinese Academy of Sciences’ Institute of Biophysics in Beijing.

In a further case, the Journal of Instrumentation saw hundreds of cross-citations from papers authored in SPIE Proceedings by Ryszard Romaniuk, an electronic engineer who was part of the collaboration that put together the CMS experiment in the Large Hadron Collider at CERN, Europe’s high-energy physics laboratory near Geneva in Switzerland. Romaniuk, who repeatedly cited CMS engineering papers, has not replied to Nature, nor to the Journal of Instrumentation’s publishers — the Institute of Physics and the International School of Advanced Studies (SISSA).

Marie McVeigh, who leads Journal Citation Reports, Thomson Reuters’ annual report of journal citation patterns and impact factors, says that the firm does not assume intent in the patterns it sees. “We just analyse data, and see where the impact factor, due to this unusual concentration of citations, is not a reflection of the journal’s citation in the broader literature. Until we can algorithmically measure motive, we are just going to measure citations.” She says that because citation stacking is only a problem if it excessively distorts journal rank, only four Brazilian journals, and not all of those that Rocha-e-Silva says participated in the arrangement, have had their impact factors suspended.

Thomson Reuters has received some appeals against its rulings, with some editors arguing that to suspend impact factors for incoming citations of which they were unaware was unfair; or that outgoing citations did not affect their own journal. The firm will deal with these by September, McVeigh says. Rocha-e-Silva appealed against the suspension of Clinics, but his request was turned down.

He feels that journal impact-factor scores are a bad way to judge scientists’ work and that the real problem is CAPES’ policy. But he also accepts responsibility for what he did. “We’re not going to play that again wherever I become editor, if I ever do. I’ve burned my fingers once,” he says.